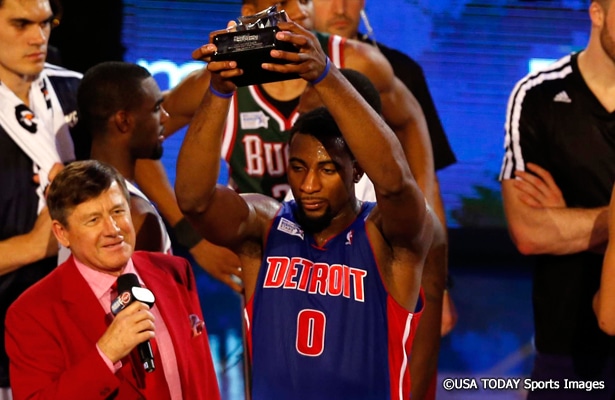 In case you missed the action on All-Star Friday, here is a recap:

This was a competitive game until the final minute, proving once again that the NBA made the right decision splitting up the rookies and sophomores into even teams.

Both teams played harder than one would expect in an All-Star exhibition and, in the end, Grant Hill’s team defeated Chris Webber’s team, 142-136.

Detroit Pistons center Andre Drummond was named the game’s MVP after contributing 30 points and 25 rebounds (a Rising Stars Challenge record). He finished with more offensive rebounds than any other player had total rebounds. He was also very efficient, shooting 12-21 from the field and 6-8 from the free throw line. Team Webber didn’t have anyone who could slow Drummond down. He grabbed rebound after rebound, and was able to score at will off of putbacks and dunks.

New York Knicks shooting guard Tim Hardaway Jr. had 36 points in the loss, leading all scorers. He also had two of the funniest moments of the night. During the game, he pretended to untie Drummond’s shoes at the free throw line in a nod to teammate J.R. Smith. When Drummond was receiving his MVP trophy, it was dropped. Without missing a beat, Hardaway Jr. grabbed the microphone from Craig Sager and said, “ESPN Not Top 10.”

Damian Lillard and Anthony Davis, who were the first two picks in the Rising Stars Draft, were solid yet unspectacular. Lillard finished with 13 points, five assists and five rebounds while Davis had 16 points, eight rebounds, three steals and two blocks.

This was the third consecutive year that the NBA mixed teams of rookies and sophomores, as opposed to pitting the first-year players against the second-year players.

In the celebrity game, the East defeated the West, 60-56, led by U.S. Secretary of Education Arne Duncan.

Kevin Hart was voted the game’s MVP by fans for the third straight year, but Hart gave the trophy to Duncan after the 49-year-old tallied a celebrity-game-record 20 points, 11 rebounds and six assists.

Michael B. Jordan was the West’s best player, finishing the game with 16 points and seven rebounds.

On Friday, it was announced that David Stern was elected into the Basketball Hall of Fame as a contributor. He will be enshrined with the Class of 2014.

Alonzo Mourning, Tim Hardaway, Mitch Richmond, Kevin Johnson and Spencer Haywood were chosen as finalists. The rest of the 2014 finalists will be announced on April 7 during the NCAA Final Four.

Be sure to check back for tomorrow’s night recap after All-Star Saturday wraps up.

The Best Photos From the NBA’s All-Star Friday