Strengths: A shooter with deep range. Cannot be left open. Solid height and length. Has consistently improved as role has increased.

Weaknesses: Somewhat of a specialist. Has to get stronger. Will have to prove that he can provide something other than shooting at the pro level in order to have a long career.

Back to the 2014 NBA Draft positional rankings
Related Topics:
Up Next 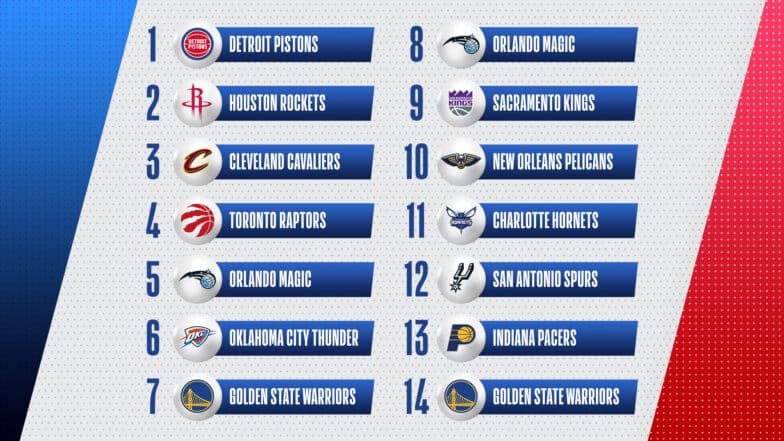 The 2021 NBA Draft is scheduled for Thursday, June 29 at 8:00 p.m. (EST). The draft will be televised on ESPN and ABC. The location of the draft is at the Nets’ Barclays Center in Brooklyn, New York. Nonetheless, although ABC is indeed airing the draft this year, they are only televising the first round. This is the first NBA draft to be held in the month of July since the 1947 Basketball Association of America (BAA) Draft.

Of course, that league went on to become the National Basketball Association (NBA). For NBA Draft betting, there are plenty of sports books available for American gamblers. The best sports books include Bovada, DraftKings, MyBookie, FanDuel, and BetUS. For NBA Draft Futures, Bovada, DraftKings, and BetGM are reasonable options. Additionally, there are multiple betting apps in existence nowadays that are accessible and easy to use, such as from BetUS, Bovada, BetOnline, and Intertops.

On the RSCI Top 100, he also ranked first above all other recruits. With a total of 544 points, Cunningham led the Big 12 in scoring during the 2020-21 season. When asked about how he felt concerning the probability of his No. 1 selection in the draft, he said, “If I am able to go in there and be the No. 1 pick, I’m going to try to carry that same swag in how I walk on the court and make the most out of it and wear the red, white, and blue for sure.” Detroit Pistons general manager Troy Weaver also compared Cunningham to Grant Hill, the No. 3 pick out of Duke from the 1994 NBA Draft.

Reported by CBS Sports, the Houston Rockets are interested in trading up to pick Cunningham. According to Shams Charania of Stadium, the Detroit Pistons and Rockets are negotiating a possible trade. This is considering the fact that Houston also has the Nos. 23 and 24 picks of this draft, too. The sports reporter for The Athletic and Stadium stated, “The Houston Rockets have the No. 2 overall pick of the 2021 NBA Draft, but I’m told they’re aggressively pursuing Detroit’s No. 1 overall pick. The Rockets have done extensive research on presumptive No. 1 overall pick Cade Cunningham.” If the organization is serious about trading up, they’ll do everything in their power to make it happen.

Jalen Green has the highest odds of being selected second in the draft. According to NBA.com mock drafts and various oddsmakers, his draft position is still most appealing to the Houston Rockets, especially if the Pistons are unwilling to make a trade. Green is a six-foot-six shooting guard from the NBA G League. On March 8, 2021, while playing for the NBA G League Ignite in the first round of the playoffs, the 19-year-old shooting guard finished his performance with a season-high of 30 points, seven assists, and five rebounds, in the 127-102 defeat versus the Raptors 905. In 15 games played in the 2020-21 season, Green averaged 17.9 points, 4.1 rebounds, 2.8 assists, and 1.5 steals in 32 minutes played per game.

Per one report from Kelly Iko of The Athletic, the Houston staff writer stated, “USC’s Evan Mobley has been discussed in some circles, as well as Gonzaga’s Jalen Suggs, but smart money would be on the Rockets taking the 19-year-old out of the G League’s Ignite on draft night.” He reaffirmed his position and main point a bout head coach Stephen Silas’ likeness to flexible guards by stating, “It’s well known that head coach Stephen Silas has an affinity for versatile guards, and Green has been said to have the highest upside in his class, from a scoring, explosive, and star standpoint.” The California-born athlete could fit in nicely with the Rockets.

Evan Mobley has the best odds for the third overall pick of the draft. Mobley is the seven-foot tall forward/center Pac-12 Player of the Year (2021) and consensus second-team All-American (2021) from the USC Trojans. On March 11, 2021, in the team’s 91-85 double overtime win against the Utah Utes in the Pac-12 Tournament quarterfinals, Mobley scored a career-high 26 points, nine rebounds, and five blocks. In 33 games played in the 2020-21 season for the Trojans, Mobley averaged 16.4 points, 8.7 rebounds, 2.4 assists, and a field goal percentage of 57.8 percent. The Trojans made it to the Elite Eight after concluding their season schedule with the second-most wins (25) in program history. According to the RSCI Top 100, the 20-year-old player was ranked third on the list.

Since Anthony Davis from the Southeastern Conference in 2012, he is the only other player to win the Pac-12 Player of the Year, Defensive Player of the Year, and Freshman Player of the Year all in the same year. Mobley told the media on Friday, “I feel like as a modern-day NBA big, you have to be able to shoot, guard multiple positions, stretch the floor, and put the ball on the floor a little bit.” He later said in the interview, “I think I’ll be a generational player that no one has really seen before. That’s what I’m aspiring to be, and I’m just going to keep working and staying in the gym until I get there.” The Cleveland Cavaliers are in position to draft Mobley, but teams like the Toronto Raptors and Orlando Magic could trade up to pursue the player on draft night.

The top 10 most common picks of this draft are Cade Cunningham, Jalen Green, Evan Mobley, Jalen Suggs, Scottie Barnes, Jonathan Kuminga, James Bouknight, Davion Mitchell, Keon Johnson, and Franz Wagner. However, Josh Giddey could be the dark horse for the New Orleans Pelicans, considering they have the tenth pick of the draft. To add to that observation, The Ringer mock draft is showing Corey Kispert at the No. 10 spot. Kispert’s draft value lies within his perimeter shooting. In the 2020-21 season, the six-foot-seven Gonzaga forward shot 44 percent from beyond the arc. He also led the West Coast Conference in three-point field goal attempts (207) and shots made (91) last season. 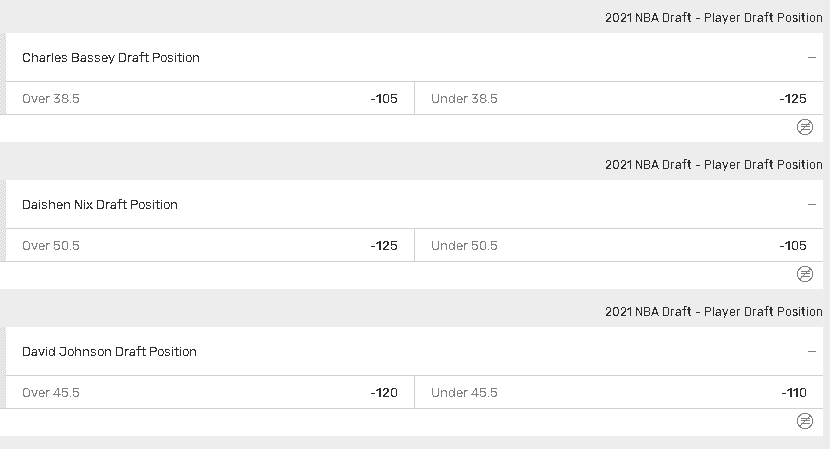 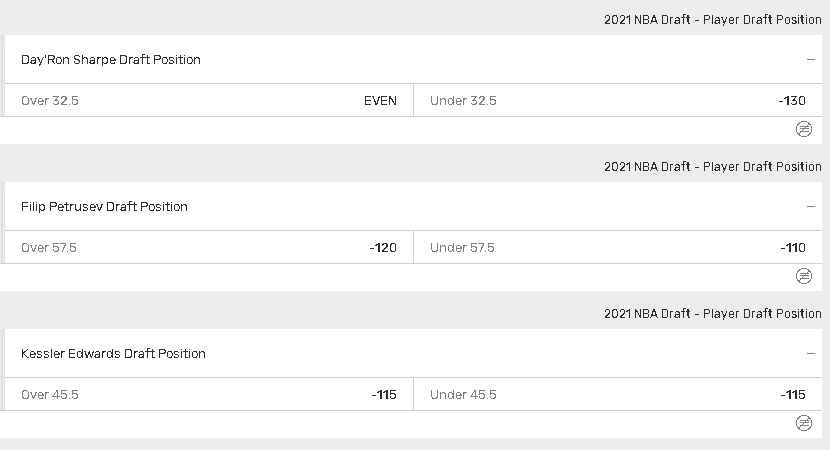 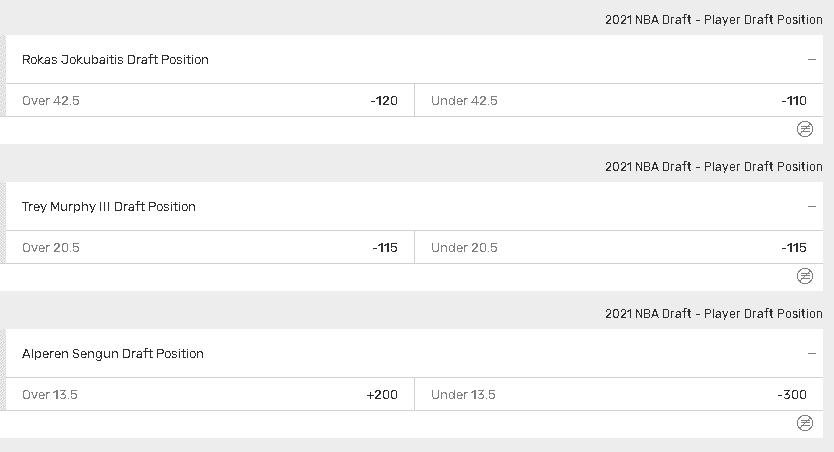 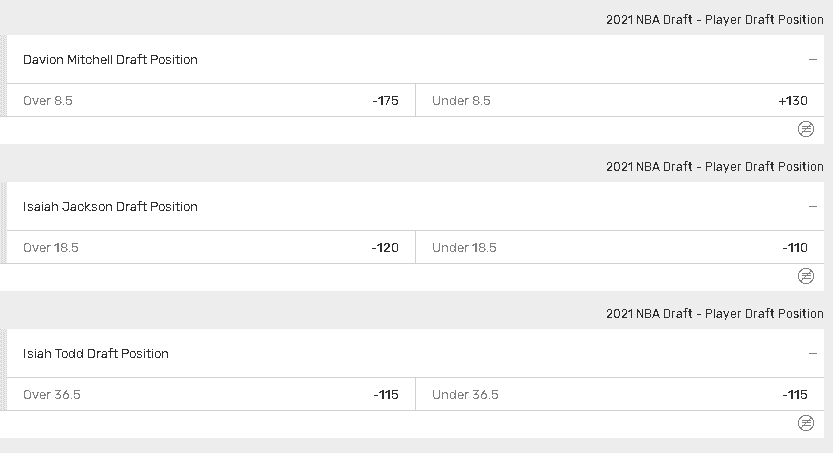 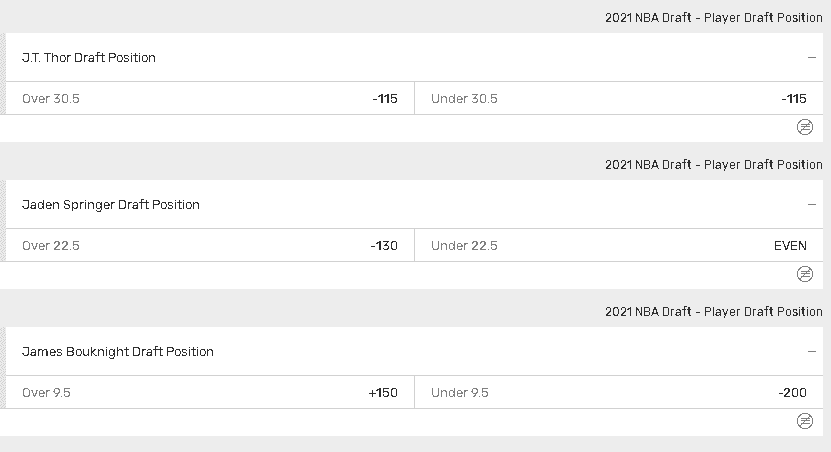 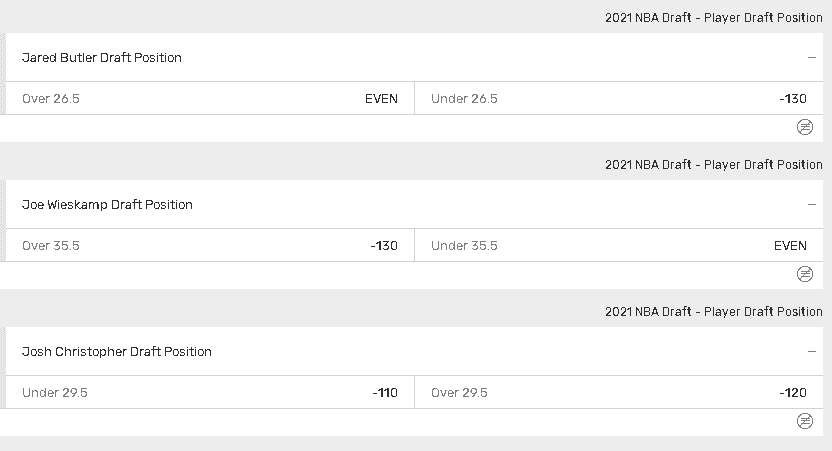 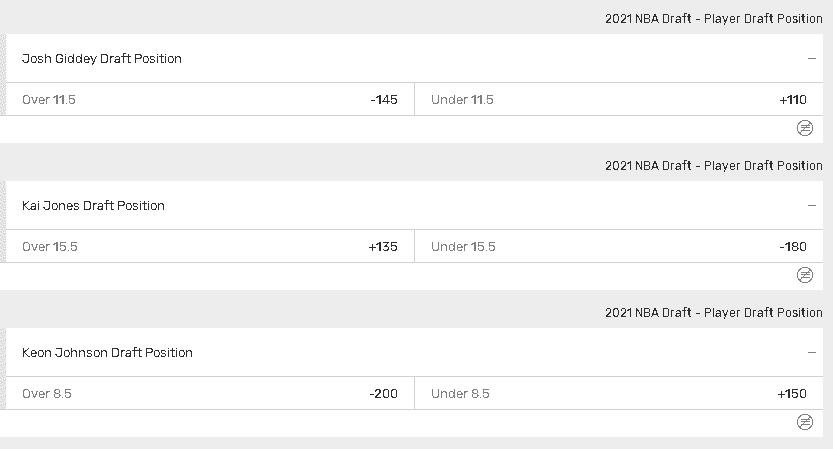 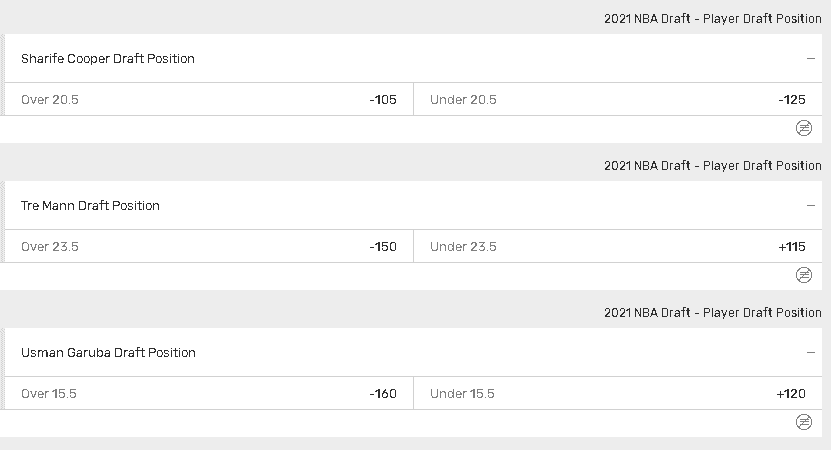 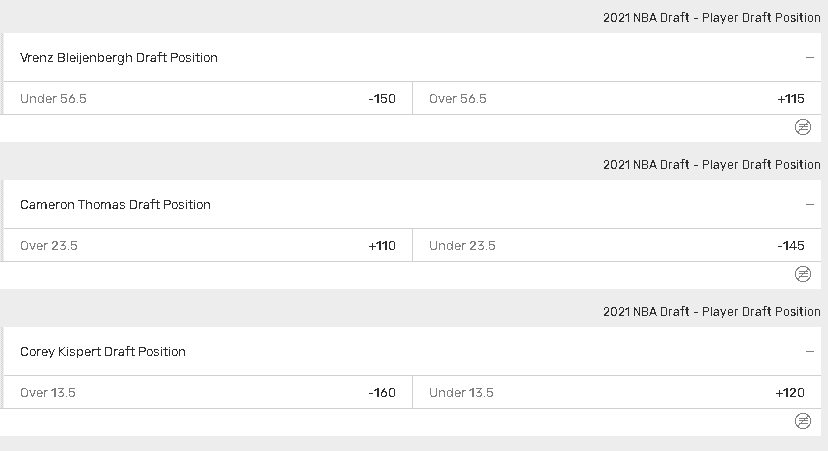 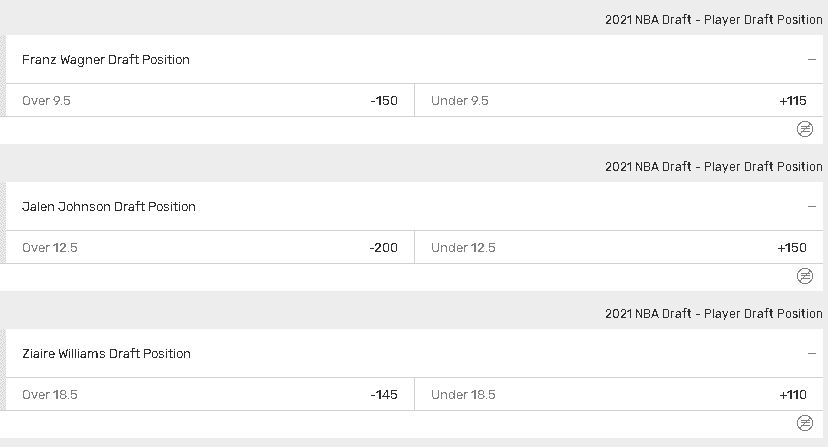 In the first round of the draft, the favored exact order is Cade Cunningham, Jalen Green, Evan Mobley, and Jalen Suggs. The current odds are listed at -120. Another realistic possibility is Evan Mobley getting selected before Jalen Green. The exact order odds for this scenario are +600. While the Rockets seem to show the most interest in Green, the organization could pull the wool over everyone’s eyes. Bettors should not assume anything. The Rockets may go after Cunningham, if the opportunity presents itself and trades occur the night of the draft. Moreover, there is also a chance that Suggs could get picked before Mobley.

The odds for that outcome are also +600. The Cavaliers could use another aggressive defender and solid play-maker. Suggs specializes in pick-and-roll situations, so this is something for the Cavs to consider in the long run. In 30 games played, he averaged 14.4 points, 5.3 rebounds, 4.5 assists, and shot 50.3 percent from the field. As a Gonzaga Bulldog, the 20-year-old guard also won a state championship in his freshman season. Having said all of this, fans need to lower their expectations before the draft. There are times these mock drafts and player interviews are not what they seem.

Regarding NBA Draft betting sites, e.g. FanDuel, DraftKings, and BetUS, bettors can bet on the top three or four picks in order, the first player to be drafted by position, a specific player being drafted by a certain team, and the Over/Under player number in the draft. As for placing bets before or during the season, the choices to bet on assists, rebounds, and points per game are other notable opportunities to keep in mind. Not to mention, NBA Finals prop bets, the Finals MVP winner, and regular season MVP winner are other options as well. The 2022 NBA Finals is scheduled to begin in June of next year.

66 players accepted invites to the 2019 NBA Draft Combine in Chicago. 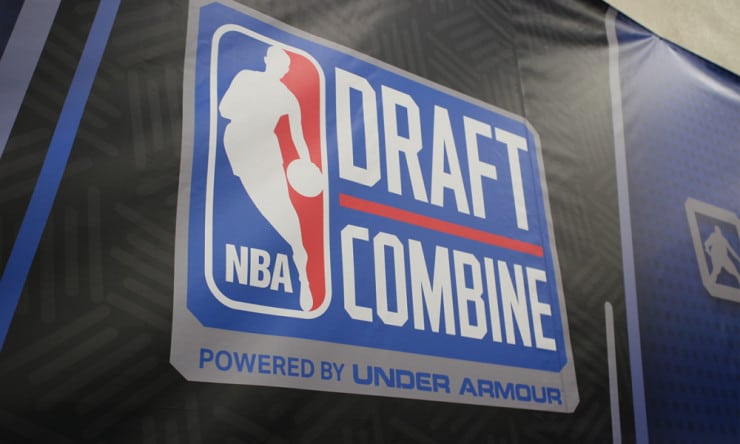 The NBA Draft Combine is the first step in the Draft process for NBA hopefuls and features five-on-five games as well as shooting and strength and agility drills at Quest Multisport in Chicago on Thursday, May 16 and Friday, May 17.

A select number of draft-eligible players will be invited to participate in the 2019 NBA Draft Combine based on their performance in the NBA G League Elite Camp, which will take place May 12-14 at Quest Multisport.

Below is a list of expected attendees at the 2019 NBA Draft Combine powered by Under Armour.