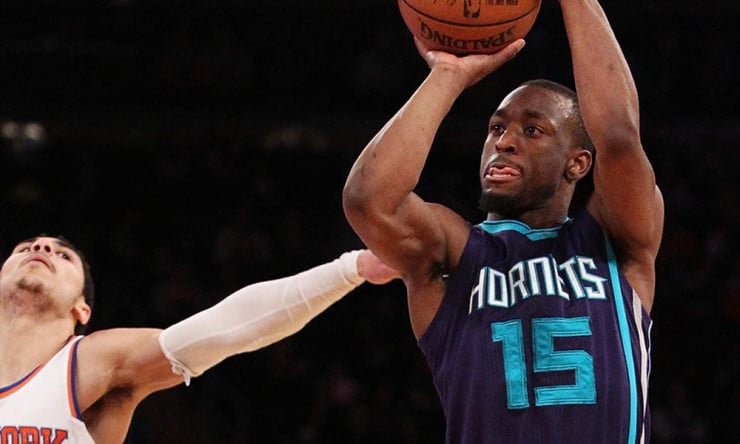 After using an 18-0 run in Game 3 to defeat the Miami HEAT, the Charlotte Hornets used another huge run in Game 4 to beat the HEAT 89-85 on Monday night. This Hornets victory ties the series at two games apiece.

Miami got off to a great start in the game, as they led the Hornets 26-19 after the first quarter. Luol Deng and Goran Dragic each scored seven points in the opening frame and the HEAT shot 50 percent from the field as a team.

The Hornets then went on a massive 27-6 run to end the second quarter, while shooting 50 percent from the field. The HEAT went just 3-of-19 from the field in the quarter and failed to record a field goal in nearly seven minutes of game time. Charlotte took an 11-point lead into halftime and were led by 15 points from Kemba Walker.

Game 4 featured two big runs for each team. Following the Hornets’ run that eventually ballooned their lead to 36-8 in the third quarter, the HEAT went on a 17-1 run to pull within 58-56. Walker got the Hornets back on track after the HEAT run and scored the team’s next five points. Walker came up big more often than not for the Hornets, as he finished with a game-high 34 points while also contributing four rebounds, three steals, two blocks and one assist.

Charlotte was able to slow down some of the HEAT’s best scorers in the series. Deng came into the game averaging 22 points on 64 percent shooting from the field, but finished with 15 points on 4-of-14 shooting. Dwyane Wade finished with 12 points on 4-of-11 shooting, and Hassan Whiteside was limited to just eight points, seven rebounds and three blocks after averaging 17 points, 11 rebounds and three blocks in the three previous games.

Miami trailed by two points with 31.1 seconds left, but Courtney Lee grabbed an offensive rebound off of a Walker missed three-pointer and the HEAT were forced to foul with 4.6 seconds remaining. Lee hit both free throws to seal the game for the Hornets.

Jeremy Lin proved to be huge for the Hornets with 21 points off of the bench, including seven points in the fourth quarter. The Hornets outscored the HEAT 44-30 in the paint and were able to force 17 turnovers.

The series will shift back to Miami in what will now become the first team to win two out of the remaining three games. If the Hornets want to have a chance at eliminating the HEAT, they’re going to have to take a game in Miami, something they weren’t able to do in the first two games of the series. Game 5 is Wednesday night at 8 p.m. EST.