The Cleveland Cavaliers have been the class of the Eastern Conference for the past two seasons, but Indiana Pacers center Myles Turner believes there may be a new sheriff in town. 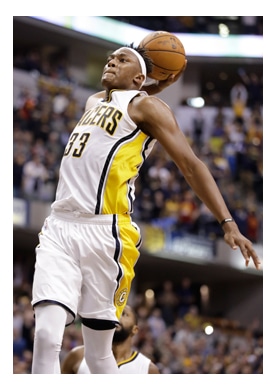 “I think we can be a top-four seed in the East,” Turner told Basketball Insiders. “We can challenge Cleveland and I think we can make a big push to be in the Eastern Conference Finals. My expectations are high.”

Turner believes the revamped Pacers can contend with Cleveland thanks to the acquisitions of Jeff Teague, Thaddeus Young and Al Jefferson.

Young echoed Turner’s belief that Indiana can be a top-four seed.

“Yeah, definitely,” Young said. “We all think that. We all continue to go out there and get better each and every day. We don’t want to put wins and losses on it, but we definitely think we can be a top-four team in the East. We think we can continue to improve each and every game, and it’s a growing process. We’re going through a growing process and we’re going through growing pains at the beginning of the season. The guys are getting more acclimated with each other and we’re all going out there and playing.”

If Indiana wants to finish as one of the conference’s top teams, head coach Nate McMillan believes Turner’s ability to become a defensive anchor by communicating and defending pick-and-roll sets will be a major determining factor toward achieving that goal.

“That five is the anchor of most defenses and kind of ends with him,” McMillan said. “But it starts with your guard. Jeff has to establish that out front on the ball and Myles is the guy in back who will have to clean up everything. We’ve had really good centers the last few years that have done a great job of defending and he was able to learn last year from Ian Mahinmi. And as I mentioned in the playoffs against Toronto, [Jonas] Valanciunas up there, he’s a big, physical guy. Myles did a good job of defending and protecting the basket and we saw growth there. It’s going to take some time with him; he’s [in his] second year and you’re playing that five position and that’s an important position, but this kid works extremely hard and we certainly are confident that he can get the job done.”

Turner showed his ability to change the momentum of a game on both ends of the court toward the end of the first half against the Brooklyn Nets. With 1:07 left in the half, Turner made a 19-foot jumper off a pick-and-pop play with an assist from Paul George. After a defensive stop on the following possession, Turner ran the floor for a layup in transition as Monta Ellis found him on the break with 30 seconds to go in the half. Finally, when Brooklyn’s Jeremy Lin attempted a layup at the rim with the shot clock winding down, Turner swatted his shot into the first row.

Myles Turner with the swat in phantom cam! pic.twitter.com/66JaqK5qCx

“He’s a very athletic, active guy who can block shots and shoot the basketball,” Young said. “He has a chance to be something great in this league and you guys saw last game, 30 [points] and 16 [rebounds]. That should tell you what he’s capable of.”

Turner has busted out of the gate, averaging 21 points, 10 rebounds and a league-leading 3.3 blocks in his first three games. More importantly, Turner is producing efficiently by converting on 62 percent of his field goal attempts.

“I put up maybe 500-600 threes a day,” Turner told Basketball Insiders. “I knew I was going to be able to stretch the floor this year playing the five position. They really wanted me to be able to spread the floor a lot. I worked on my shot a lot and worked on making reads out of the pick-and-pop.”

With Turner’s ability to stretch the floor in pick-and-pop sets and the addition of Young, Indiana’s guard tandem of Teague and Monta Ellis has more freedom to break down the defense and penetrate. Once in the lane, either guard can attack his man or kick out to Turner or Young. If the defending big man doesn’t help, Teague and Ellis have the ability to take the opposing guard off the dribble and get to the rim. Should the defending big man converge and help, Turner and Young are capable shooters from the elbows and beyond the arc.

“Jeff is a guy who can really push the tempo and he can create for himself as well as for others,” Turner said. “He’s that aggressive, attacking scorer that we needed.”

It’s no coincidence the Pacers let Ian Mahinmi walk in free agency. Indiana felt Turner was ready to become a full-time starting center for 30-plus minutes a game and as a featured member of the offense. Due to his rapid growth, Turner is considered one of the early favorites for the league’s Most Improved Player of the Year award.

As we saw when Kevin Garnett mentored Karl-Anthony Towns, having a proven veteran’s tutelage can expedite a rising young star’s development. Jefferson has taken a similar mentorship role with Turner. Jefferson has averaged nearly 17 points and nine rebounds per game over his career. During his prime, Jefferson was a 20-10 guy who shot 50 percent from the field over a seven-year span from 2007-14.

“Big Al, obviously, is great at what he does down on the block and it’s great to learn under him,” Turner said. “That’s what I’m able to do after practice.”

After entering the league in a draft class with notable big men including Towns, Kristaps Porzingis and Jahlil Okafor, Turner has the potential to become one of the league’s best centers.

“Obviously I rank myself high, but I don’t really compare myself to other guys,” Turner said. “Other guys play in systems that they thrive in. That’s kind of how I see it. You’ve got guys like Brook Lopez, for instance, who’s in a system that’s perfect for him. I don’t think you can assess individual talent off of what guys do in their individual systems. I wouldn’t say rank myself, but I feel like I am one of the top centers in this league.”

If Turner becomes the league’s Most Improved Player and one of the top overall centers, the Pacers will be one of the four best teams in the East as he predicted and have homecourt advantage in the first round of the playoffs.

Paul George couldn’t get over the hump against LeBron James when he was with the Miami Heat in three playoff series with a notable supporting cast of David West, Roy Hibbert, George Hill and Lance Stephenson. This season, Turner hopes he and the new supporting cast can help George finally dethrone James.

Related Topics:FeaturedIndiana Pacers
Up Next

NBA PM: Tim Quarterman Making Most of His Opportunity