There are American teenagers with drivers licenses right now who were not alive when Elton Brand was selected by the Chicago Bulls with the first overall pick in the 1999 NBA Draft. That also means there are current college freshmen who weren’t yet born when Michael Jordan and Scottie Pippen took home their sixth and final NBA championship. In other words, there’s a whole generation of basketball fans who don’t have the first idea what Brand meant as the first brick in what would be a long and arduous series of rebuilding strategies by those post-Jordan Bulls.

In short: Brand meant a lot.

As a senior at Peekskill High School in New York, Brand averaged over 40 points and 20 rebounds per game on his way to winning two state championships and being named New York’s Mr. Basketball in 1997.

Not surprisingly, he was one of the top recruits in the country that year, which in the mid-90s meant he absolutely was going to be recruited by Mike Krzyzewski and Duke University. He ended up choosing the Blue Devils, where he’d play alongside Shane Battier, Corey Maggette and William Avery on a team that would eventually make it to the 1999 NCAA National Championship game. As a sophomore, Brand was named an All-American and won that year’s John R. Wooden Award (which goes to the most outstanding player in the country). This success prompted him to forgo his final two years of college eligibility and declare for the 1999 NBA Draft, which was a lot more controversial than it sounds.

Just about every important player that has come through Duke over the course of the last few years has played a single year of basketball under Coach K and then left the Blue Devils to start cashing NBA paychecks. Kyrie Irving, Jabari Parker, Jahlil Okafor, Justise Winslow, Tyus Jones and, most recently, Brandon Ingram all left Duke after one season. In a way, all of them have Brand to thank for their early entry into the NBA.

Before Brand’s sophomore-year departure for the NBA, leaving Coach K’s program early simply wasn’t done. Brand (followed by teammates Maggette and Avery) was literally the first player ever to leave Coach K’s program without having played the full four years, which many Duke fans took as a slap in the face. One fan even wrote Brand a rather scathing letter lambasting his decision to split so soon, to which Brand replied, “Never being considered a part of your posh group of yuppies really hurts me to the heart… I don’t care about you or your alumni.”

Brand was ready to move on.

In June of 1999, Brand was the top pick in the draft, making him the first star-quality player the Chicago Bulls had seen on their roster in the two years since Jordan retired and Phil Jackson, Pippen and Dennis Rodman had moved on to other basketball opportunities. 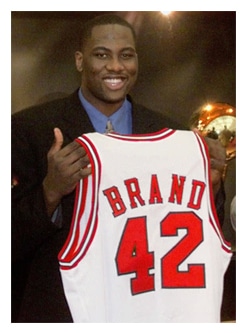 The 1998-99 season was a buffer year for the Bulls. Coming off a championship in 1998, they had the worst possible first-round pick in that summer’s NBA Draft. They suffered pretty drastically for a year, trotting out a starting lineup that featured Toni Kukoc, Brent Barry, Randy Brown, Mark Bryant and Dickey Simpkins. They finished a dismal 13-37 in that lockout-shortened season, which was more than enough to garner them the ping pong balls necessary to land the top pick, which they used on Brand.

Brand’s rookie season was, by all accounts, a huge success. He averaged 20.1 points and 10 rebounds in 81 games, and he started in 80 contests. At the time, it was only the 19th time in NBA history that a player posted those kinds of numbers in his first year in the league. He won the MVP award at the Schick Rookie Challenge during All-Star Weekend in 2000, had a 44-point game toward the end of the season and was named the Co-Rookie of the Year Award winner with Houston’s Steve Francis. It was a very good year.

His second season was more of the same, as he posted almost identical stats and continued to dominate box scores even as the Bulls kept struggling to win games. That must have been why Chicago’s front office felt the need to make a change after two consecutive 20/10 seasons from Brand, trading him for the rights to Tyson Chandler in 2001. Obviously, Chandler has proven himself to be one of the best defensive big men of the last 15 years, but he didn’t hit the ground running when he entered league at age 18. For Chicago to forfeit a talent like Brand in exchange for an unproven high school kid was a massive gamble that never did pay off for the Bulls.

The Los Angeles Clippers, who traded the rights to Chandler for Brand, benefitted greatly from the move. He made the All-Star team twice in L.A. and helped return the team to respectibility. In 2006, he finally made it to the playoffs for the first time in his career. For a while, it looked like he might end up being a Clipper for life.

When the 2008 offseason got underway and the Clippers signed Baron Davis, rumors swirled that Brand had recruited him and agreed to take less money. After all, reports indicated that he wanted to play with his longtime buddy and add some extra star power to the roster. However, very controversially, Brand instead opted to sign a five-year deal worth $82 million with the Philadelphia 76ers. He would earn $7 million more than the Clippers could offer, and shockingly leave Davis high and dry on a Clippers team that was nowhere near as good without Brand.

After rupturing his Achilles tendon in the 2007-08 season, however, Brand struggled with injuries for the remainder of his career. Always a great locker-room presence and de facto assistant coach, Brand hasn’t been an integral part of an NBA lineup since 2011-12 and hasn’t topped 20 minutes per game since the 2012-13 campaign.

To relatively new fans of the game, that means they only know Brand as a bench warmer and veteran mentor who barely contributes to the outcomes of games. But there was so much more to his career as a thrilling young talent who served as the next man up after Michael Jordan in Chicago – a seemingly impossible task that he did reasonably well tackling.

Had Chicago not traded him after two seasons, it’s interesting to think where that franchise would have ended up. Perhaps they would have returned to the playoffs quicker than they ultimately did, or perhaps they would have been mediocre even longer than they were. It’s impossible to say, but his story is a lot more interesting than that of some faceless veteran at the end of the bench. He was a quiet star for most of his career, and he’s one of the last remnants of the 1990s as the NBA is now dominated by its next generation of stars.

Kevin Garnett, Kobe Bryant, Tim Duncan and now Brand all are gone, and now that Brand has officially retired after 17 seasons, there are only six players drafted in the 1990s remaining in the NBA: Vince Carter, Manu Ginobili, Dirk Nowitzki, Paul Pierce, Jason Terry and Metta World Peace. Today’s teenagers know a little more about those guys, but in two or three years there will be teenagers getting drivers licenses who know just as little about those players as today’s teens know about Brand.