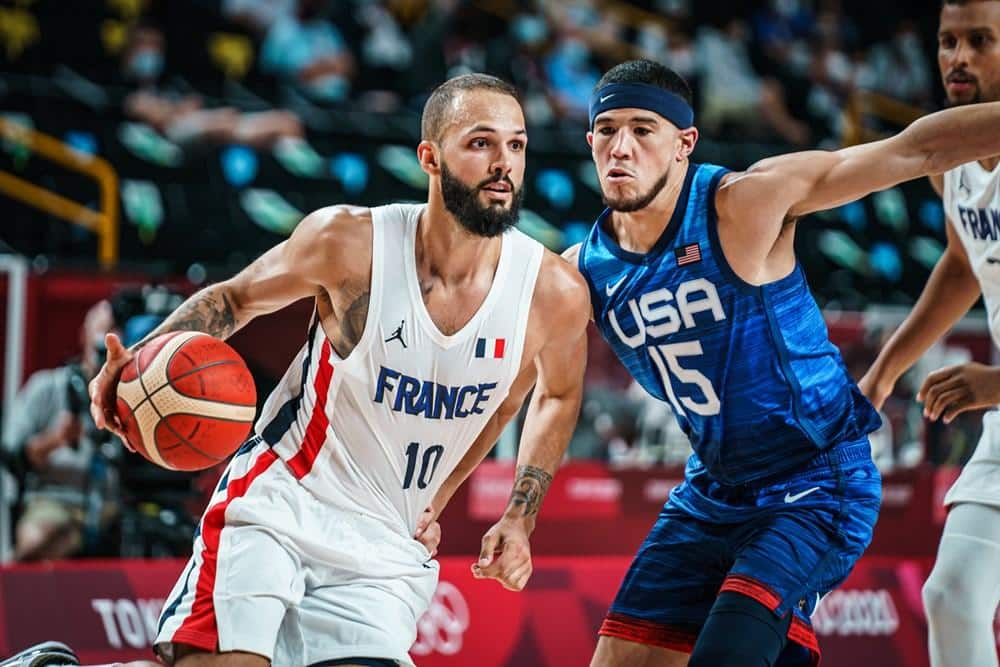 On Wednesday, the Olympics’ schedule for men’s basketball begins with the United States taking on Iran at 12:40 a.m. (EST). This is one of the listed games for Group A. For the preview, prediction, and betting picks for the USA vs. Iran matchup, this other article is available for bettors. Then, for Group B, Italy will play against Australia at 4:20 a.m. (EST). For the second Group A matchup on Wednesday, the Czech Republic will face France at 8:00 a.m. (EST). These games can be watched live via Peacock, NBC’s exclusive streaming service. Viewers can also watch the televised games with NBA League Pass.

Bovada and MyBookie are two excellent betting sites for gambling on men’s basketball during the 2020 Tokyo Olympics. The best NBA betting apps are from MyBookie, BetUS, Bovada, Intertops, and BetOnline. When bettors use MyBookie, the app offers a $500 deposit bonus for new users. For the Italy vs. Australia and France vs. Czech Republic games, if an individual wants to bet on the best moneyline, DraftKings is the superior choice. For a side note, these games are being played at the Saitama Super Arena in Saitama, Japan.

Italy vs. Australia – Group B

Italy defeated Germany 92-82 on Sunday, July 25. Forward Simone Fontecchio led the team in statistics, finishing his performance with 20 points, four rebounds, three steals, and one block. Stefano Tonut had 18 points, three rebounds, two assists, and three steals. Italy’s bench players combined for 28 points in their 10-point win over Germany. Hawks’ forward Danilo Gallinari scored 18 points from the bench, too. One big advantage the Italians had over the Germans was their three-point shooting accuracy. They shot 15-for-31 (48.4 percent) from beyond the arc. Plus, Italy had a total of 11 steals overall, and this was on top of an 11-0 run to help seal their first victory.

Moreover, Australia defeated Nigeria 84-67 on Sunday, July 25. The top story after this win was Australia’s bench players outscoring their starters. The Aussies’ starters scored 26 points versus Nigeria, while the reserve players had 58 points! A win is a win, but some players needed to elevate their intensity, such as Jazz’s Joe Ingles. In 33 minutes, he scored only 11 points  In 35 minutes played, guard Patty Mills ended his performance with 25 points, four rebounds, six assists, and four steals. Forward Nick Kay had 12 points, eight rebounds, three assists, and one block. While the Aussies did out-rebound the Nigerians 44 to 38, they also had a much higher free throw shooting percentage, shooting 17-for-19 (89.5 percent) from the free throw line.

Australia is the favored team over Italy. They held Nigeria to 67 points. Aside from Gallinari’s decent performance from the bench against Germany, some bettors are not expecting the Italians to be able to keep up with the Aussies this time around. According to Bovada, Australia has -350 odds of defeating Italy, whereas the Italians have +275 odds of pulling off the upset. In all fairness, picking Australia is the best bet. Not to mention, it is the safest bet concerning the uncertainties each of the players are facing during the COVID-19 pandemic.

France vs. Czech Republic – Group A

France defeated Team USA 83-76 this past Sunday. In 34 minutes played, shooting guard Evan Fournier ended his performance with 28 points, four rebounds, one assist, and one steal. Utah Jazz center Rudy Gobert finished his game with 14 points, nine rebounds, and one assist. The bench players combined for 17 points against USA. Moustapha Fall scored seven points and acquired four rebounds. On top of Brooklyn Nets’ small forward Kevin Durant fouling out, Team USA missing too many baskets led to a satisfying victory for France. The French shot 29-for-62 (46.8 percent) from the field, whereas the Americans shot 25-for-69 (36.2 percent) from the field. France also out-rebounded USA 42 to 36. Furthermore, Fournier and Gobert are once again starting for France versus Czech Republic.

In the Czech Republic’s 84-78 victory over Iran, bench player Patrik Auda led the team in scoring, with a total of 16 points in 23 minutes played. He also had six rebounds against Iran. Blake Schilb had 14 points, four rebounds, five assists, and one block in 24 minutes played. Schilb is projected to be in the starting lineup against France. While the Iranians shot 31-62 (50 percent) from the field, the Czechs had a field goal shooting percentage of 44.6 percent. This was based on shooting 33-for-74. If the Czech players prefer quantity over quality, they will most likely struggle versus France’s starting lineup. Additionally, it helped for the team to out-rebound Iran 43 to 33. We’ll see if the Czech Republic can maintain their rebounding abilities against fresh NBA-tested competitors.

Sports bettors might be tempted to pick an upset on Wednesday, but then again, we have little data to base our predictions on this early during the Tokyo Olympics. France was good enough to defeat Team USA, so picking them to win over the Czech Republic makes perfect sense. And, when we look at the number of different French players who have NBA experience, the best possible pick becomes as clear as daylight. Expect the Czechs to hang with the French throughout the majority of the four quarters. However, France will pull away in the closing minutes to earn their second victory in the Tokyo Games.