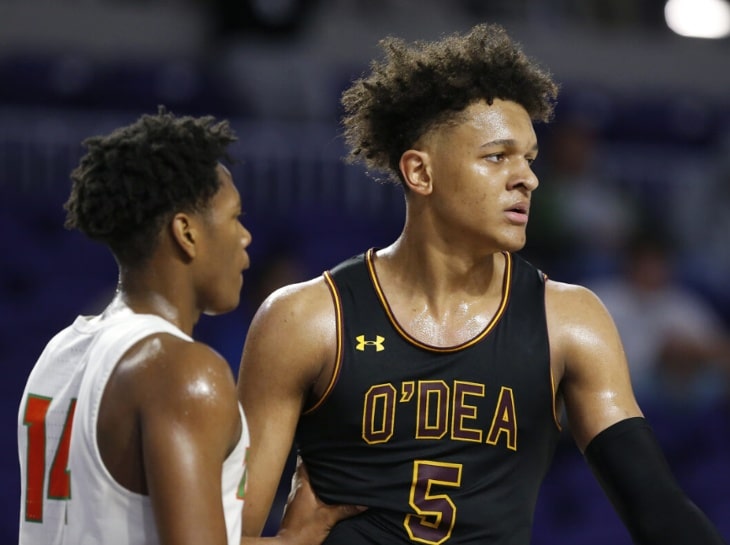 The 2022 NBA Draft is scheduled for Jun. 23, 2022; early 2022 NBA Draft odds are available below. According to Bovada oddsmakers, Paolo Banchero possesses the best odds (-105) of being selected first overall.

Per Bovada, as stated and shown above, Paolo Banchero has the most favorable odds (-105) of earning the No. 1 overall selection. Banchero is an American-Italian power forward for the Duke Blue Devils. He is 6’10” and weighs 250 lbs. Also, the forward was born in Seattle, Washington and attended O’Dea High School. The star played both basketball and football. In a total of 46 games played, he averaged 18.4 points and 5.1 rebounds per game.

In 2021, he played in the McDonald’s All-American Game and Jordan Brand Classic. Referencing 247Sports recruitment rankings, the star recruit was ranked second in the country. Additionally, Rivals has the player ranked second as well. Banchero committed to Duke University on Aug. 20, 2020. He turns 19 years old this November.

Furthermore, Chet Holmgren has the best odds (-105) of being selected second overall. Holmgren is a seven-foot center for the Gonzaga Bulldogs. According to 247Sports, Rivals and ESPN, the Minneapolis native is ranked first in the recruitment rankings. ESPN’s grade scale is from 0 to 100, with 100 being the highest rating. Holmgren’s grade is 97.

Moreover, Jaden Hardy is projected to earn the No. 3 selection in next year’s draft. The star possesses +500 odds. Hardy is 6’4” and weighs 190 lbs. He attended Coronado High School in Henderson, Nevada. Per 247Sports, the Detroit native is ranked third overall on their recruitment list. However, Rivals has the 19-year-old ranked fifth. His ESPN grade is also 97, too.

In 2021, Hardy played in the McDonald’s All-American Game, Jordan Brand Classic and Nike Hoop Summit. Instead of pursuing the NCAA, the shooting guard decided to play for the NBA G League’s Ignite. Hardy is turning 20 years old next July.

In summary, Cade Cunningham was selected first overall by the Detroit Pistons in the 2021 NBA Draft. Leading up to this year’s draft, a few NBA analysts created mock drafts, ranking Evan Mobley and Jalen Green ahead of Cunningham.

Throughout the course of each basketball season — whether high school or college — players’ stocks can either rise or fall. Therefore, some bettors may prefer to wait it out. In the coming months, these odds listed above will likely change.