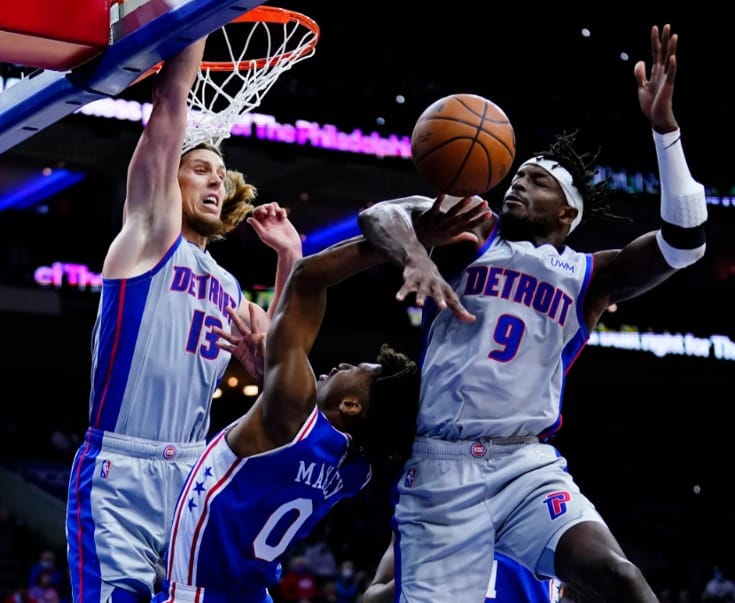 ESPN’s Basketball Power Index: 76ers have a 60.8% chance of winning

According to Land of Basketball’s database, based on 381 regular season games played all-time between these two Eastern Conference teams, the 76ers are 224-157 versus the Pistons. Leading into Thursday night’s matchup, Philadelphia is 2-1 versus Detroit in the last three head-to-head meetings. On Oct. 28, 2021, the last time these teams faced off, the 76ers won 110-102 at home. For another notable trend, the Pistons are also 1-9 in their past 10 head-to-head contests.

Additionally, for the Pistons, the top news story pertains to the organization assigning guard Saben Lee, forward Isaiah Livers and center Luka Garza to the Motor City Cruise, an NBA G League team based in Detroit. On August 23, 2021, Pistons assistant coach DJ Bakker was announced as the team’s first head coach of the Cruise.

#Pistons don't have any of their regulars on the injury report for Thursday vs. #Sixers.

Saben Lee, Isaiah Livers and Luka Garza are on G League assignments but that's it.

Meanwhile, in the 76ers’ 103-98 home win over the Bulls on Wednesday, guard Seth Curry led his team in scoring, finishing his performance with 22 points in 34 minutes of action. Georges Niang closed out his night with 18 points, 3.0 rebounds and 1.0 assist in 32 minutes played, too. Despite losing the rebounding battle 47 to 35, their long-range jump shots were a significant factor in the team’s eighth consecutive win against Chicago.

The 76ers shot 38-for-77 (49.4%) from the floor and 12-for-28 (42.9%) from behind the arc. The Bulls were held to 19 first-quarter points. And, of course, Chicago’s two-game winning streak was snapped. On top of ranking second in the Eastern Conference standings, Philadelphia is now on a four-game winning streak. They are 4-1 at home and 2-1 away this season.

Furthermore, the total for Thursday night’s intraconference contest is set at 207.5. Regarding the spread consensus, about 55% of bettors are expecting the Bucks to cover the spread. Likewise, pertaining to the point total consensus, 63% of gamblers are predicting the total will go over 207.5. Till now, the Sixers are 5-0 as selected favorites and 1-2 as underdogs this season, while the Pistons are 1-0 as favorites and 0-6 as underdogs.

For helpful betting trends, the 76ers are 4-2 ATS in the team’s past six games. And, the total has gone over under in 10 of their last 12 contests. Also, the Sixers are 11-4 ATS in their previous 15 games played versus Detroit. To add to these betting statistics, Philadelphia is 4-1 straight up in their last five games played against Central Division opponents.

Pick the 76ers to win, they will cover the spread and the total will go over 207.5. Philadelphia is a 5.5-point favorite with BetUS.