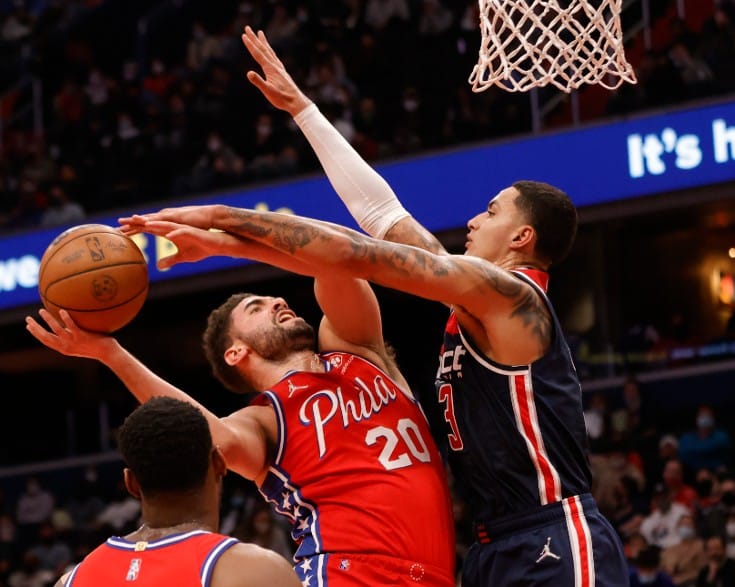 In today’s intraconference rematch, the Philadelphia 76ers (25-17) are playing the Washington Wizards (22-21) at Capital One Arena. Can Bradley Beal and the Wizards obtain their first win versus the Sixers since Dec. 5, 2019?

Comparing these teams’ betting statistics in this Eastern Conference matchup, the 76ers are 22-20 against the spread in the 2021-22 NBA regular season, while the Wizards are 18-24-1 against the spread. The start time for this contest is 2 p.m. ET. This game can be watched live via NBA League Pass, NBC Sports Philadelphia and NBC Sports Washington. Referring to Land of Basketball’s database, based on 310 head-to-head regular season games played all-time, Philadelphia is 187-123 versus Washington. Plus, in the last six meetings, the 76ers are a flawless 6-0 against them.

On Dec. 26, 2021, the first meeting during this regular season, the Sixers won 117-96 at Capital One Arena. In other news, Wizards forward Kyle Kuzma has been displaying top-tier performances in his last nine games played. The fifth-year player is averaging 25.8 points and 11.1 points per game. Kuzma is also shooting 54.3% from the field. To cast your All-Star vote for Kuzma or some other player, you can do it with the NBA App (available on Android and iOS). One other option is to go to NBA.com/vote. Fan voting for the 2022 NBA All-Star Game ends on Saturday, Jan. 22 at midnight ET.

The Sixers say Matisse Thybulle got an MRI that revealed a right shoulder sprain. He is out and will be re evaluated in approximately one week

Moreover, in the 76ers’ 109-98 road win over the Heat on Saturday, center Joel Embiid earned one more career double-double, closing out his performance with 32 points, 12 rebounds and 3.0 assists in 36 minutes of action. Forward Tobias Harris contributed 22 points, 8 rebounds and 3.0 assists in 42 minutes played as well. In the second half, Philadelphia scored a total of 66 points.

However, Miami did outscore them 44 to 34 in the paint. Offensively, the Sixers played one of their best games of the season. They shot 40-for-79 (50.6%) from the floor and 13-for-22 (40.6%) from three-point range. Following this victory, the team is now 16-8 away, 9-9 at home and 15-9 ATS on the road this season. They rank fifth overall in the Eastern Conference, trailing the top ranked Bulls by two games.

Per ESPN’s Basketball Power Index, the Wizards have a 50.7% probability of winning.

On the other side, on Saturday, in the Wizards’ 115-110 home loss versus the Trail Blazers, guard Spencer Dinwiddie scored a team-high 27 points in 34 minutes on the court. Kyle Kuzma and Montrezl Harrell each put up 16 points, too. With a total of 12 rebounds and 2.0 assists, Kuzma added another double-double to his career total.

As for the Wizards, they are 0-6 ATS in their last six performances. Not to mention, the total has gone over in four of their past five contests this season. Next, Washington is 1-4 SU in the team’s previous five meetings versus Philadelphia at Capital One Arena. Also, the total has gone over in nine of their last 11 games against Eastern Conference opponents. In conclusion, the 76ers will likely win, but the Wizards might cover the spread. If you have never placed a bet, read our handicap betting guide.

Pick the 76ers to win, the Wizards will cover the spread and the total will go over 215.5. Philadelphia is a 3.5-point favorite on the road with BetOnline.