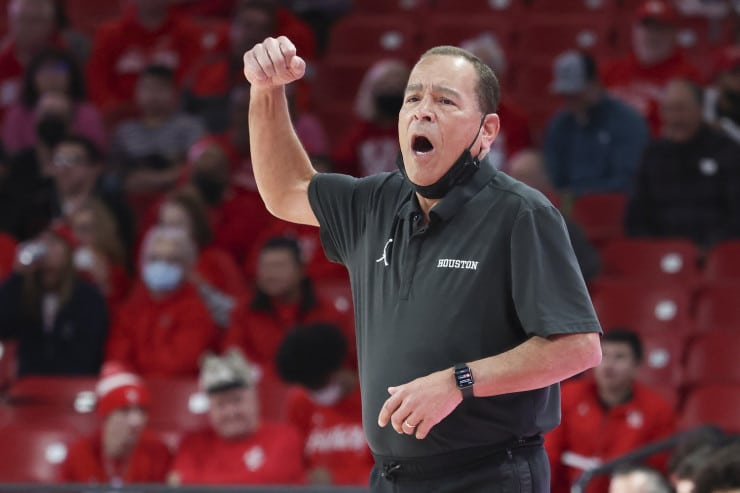 The Best Betting Sites for the AAC Conference Tournament in 2022

For a complete breakdown of the AAC tournament schedule, scroll down below.

The Best NCAAB Bets for the 2022 AAC Conference Tournament

The best bet for the 2022 American Athletic Conference is clearly going to be taking the Houston Cougars to win this tournament. There is a reason why Houston is going to be coming in as the number 18 team in the country. They finished 26-5 on the season, with a 15-3 record in the conference.

They have been one of the best teams in the country all year long and they have done so against some very noteworthy opponents.

Before we break down the best bets for the AAC Tournament, check out some of the best free bets and sports betting bonuses available for March Madness games.

The favorite coming into the AAC tournament is going to be the Houston Cougars at (-140) on the books.

The Houston Cougars have been known in the past few seasons for being one of the best teams in the country when it matters most come March. This team has proven throughout the year that not only can they play great basketball throughout the regular season, but they are a team that is going to find a lot of success in this tournament and in March Madness.

They have some impressive wins throughout the year including beating Butler, Oregon, Oklahoma State, and pretty much every other top team in the American Athletic Conference.

Next, we’ll break down a few other contenders with a chance to take home the crown in the AAC Tournament that will be hosted in Texas.

The Memphis Tigers are going to be coming into this one as the second favorite to win the American Athletic Conference Tournament. They are another team who has found plenty of success this season including beating the Houston Cougars on Sunday, 75-61.

Memphis is going to be coming into this one as the three seed. They finished 19-9 and in 13-5 in the conference.

The Southern Methodist University Mustangs are going to be coming into this one as the number two seed in the American Athletic Conference tournament. They are the third favorite on the books at +650 to win this tournament after they finished 22-7 overall and 13-4 in the conference.

March Madness betting is right around the corner. With an automatic bid to the NCAA Tournament on the line, we’ll go over a few sleepers that have the potential to run the table and win the AAC Men’s Basketball Tournament.

The Wichita State Shockers have not been playing great basketball at all this season, but as everybody knows, this team usually finds a way to get the job done in the tournament. With how bad they have been this year, as they finished 15-12 overall and 6-9 in the conference, it is tough to see that they’re going to make another run, but we can never count out the Shockers in March.

The Tulane Green Waves are going to be coming into this one as the fifth seed in the tournament after finishing 13-14 overall and 10-8 in the conference. One thing that could potentially hold back this Tulane team is that they had a few games canceled earlier in the season and they haven’t had enough reps compared to some other teams.

However, this team does have some impressive wins on the year including competing against most of the top teams in the AAC.

Every year, a dark horse emerges as a potential upset candidate. While Central Florida hasn’t played as well as in years past, the Knights can still save their season by doing some damage in the conference tournament.

The University of Central Florida has certainly not had the season that they were hoping for this season as they’re going to be coming into this one as the sixth seed in the American Athletic Conference Tournament. They finished 17-11 on a year and 9-9 in the conference, but with how well this team has played in years past during this tournament, they could be a team that still has to be feared.

Although the University of Central Florida has not looked great at all this season, we still have to give them some credit because they have played some noteworthy opponents tough throughout the year.

This is going to be an interesting tournament and most mid-major tournaments usually are, however, with how well Houston has looked all year long and their previous success in tournaments like this, and in March Madness, I have to go with the Houston Cougars to win this tournament.

They’re going to be coming into this one as a top 20 team in the country and although they are coming off a disappointing loss against the University of Memphis right before this tournament, I do think that this was a little bit of a wake-up call for this team and they’re going to be coming in ready to get back on track after that embarrassing loss to the Tigers on Sunday.