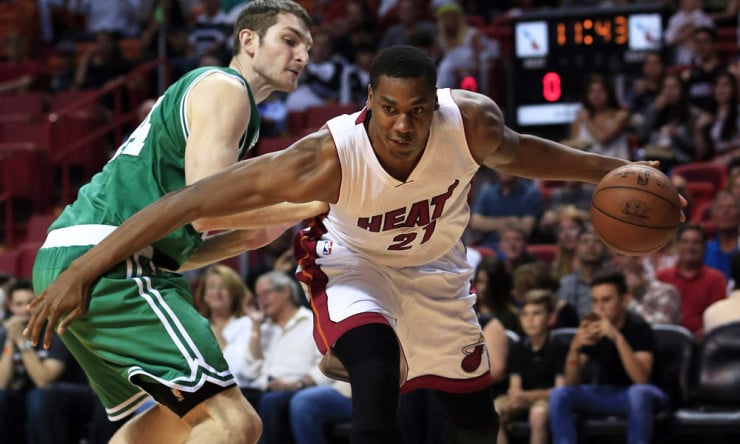 The Intrigue of Derrick Rose

Trailing 5-0, the raucous crowd in New York City’s Madison Square Garden was a tad surprised that the Chicago Bulls had begun the game looking rather listless. The Bulls were playing their third game in four nights, so the slow start was less surprising to them.

Three possessions in, though, Derrick Rose decided he had seen enough. Little did we know then that the next time fans of the New York Knicks would see Rose, he would be playing alongside Carmelo Anthony and Kristaps Porzingis instead of against them. And in his swan song for the Windy City, Rose showed the faithful packed inside of the World’s Most Famous Arena a thing or two.

Now, over the course of the 2016-17 season, he will have the opportunity to prove that it was more than lightning in a bottle.

This week, Basketball Insiders has been ranking the top 10 players at each position. To wrap up the series, we turn our attention to the league’s best centers. Although the modern NBA puts a heavier focus on perimeter talent, the league still features a number of talented big men who make their presence felt on both ends of the court.

If you haven’t already, be sure to check out our lists of the top 10 point guards, top 10 shooting guards, top 10 small forwards and top 10 power forwards. Without further ado, here are our top 10 centers entering the 2016-17 NBA season.

It’s easy to forget because he’s been buried on bad teams the last three seasons, but Thaddeus Young actually is a very good basketball player. And, if all goes as planned, we’re about to be reminded exactly how good he is now that he’s playing on a team that could actually contend in the Eastern Conference this season.

Young is remembering what it feels like to play for a team that legitimately has a chance to be good, and he couldn’t be more excited about the opportunity to once again experience success. He hasn’t been on a .500 team since the lockout-shortened 2011–12 campaign, but that could very well change now that he’s the starting four on an Indiana Pacers team that nearly all pundits agree made massive improvements over the summer.

Over 125 Players To Be Cut Before Start of Season

On Saturday, the Atlanta Hawks waived forward Richard Solomon, briefly reducing their roster to 19 players.  According to Chris Vivlamore of the Atlanta Journal-Constitution, the Hawks will quickly replace Solomon with point guard Josh Magette.

Once signed, Magette will be the 330th player inked to a new contract this offseason.  And that doesn’t even include the restructured deals of James Harden and Russell Westbrook, or the extensions given to Giannis Antetokounmpo and C.J. McCollum.

A total of $1.3 billion in new contracts were doled out specifically for the 2016-17 season.  The league will have 576 players; this is problematic for at least 126 individuals, since teams can carry a maximum of 15 players – or 450 in total – into the regular season.

Cliff Alexander is Ready to Compete

Over the next couple of weeks, each NBA team will be challenged with whittling their roster down to a maximum of 15 players. Training camps for each team kicked off within the past week, with the first action of preseason now upon us.

There were already some games over the weekend that tipped off the 2016-17 preseason schedule, with seven more scheduled for Monday night. With so few roster spots available, guys all over the league on non-guaranteed contracts will be looking to do everything they can to make a lasting impression. In all, over 125 players will be cut by opening night.

For the next few weeks, it’ll be interesting to see how the battles for roster spots play out. While teams can carry up to 15 players, many choose to keep the last roster spot open in order to maintain some flexibility. With so many players set to be cut, a team may want to sign one of those players and may keep an open roster spot just in case.

Anthony Bennett has had one of the strangest starts to an NBA career imaginable. The No. 1 overall pick in the 2013 NBA Draft enters the 2016-17 season playing with his fourth team in four years, joining the Brooklyn Nets after previous stints with the Cleveland Cavaliers, Minnesota Timberwolves and Toronto Raptors.

However, “playing” may not be the right word to use in Bennett’s case, considering he has started just three games over the course of his NBA career and averaged only 12.8 minutes a night. Last season, he appeared in just 19 games for the Raptors and logged 4.4 minutes per game before being released in February.

Now, the 23-year-old is hoping to salvage his career with the Nets – a team that is desperately searching for young talent (since the Boston Celtics own their first-round picks for the foreseeable future) and an organizational identity under new general manager Sean Marks and head coach Kenny Atkinson.

The Mentality of an Underdog

With the NBA preseason underway, each team has non-guaranteed players who have no idea if they’ll be on the opening-night roster. The 20-man preseason roster must be cut down to 15 by the start of the regular season. It’s a stressful time to be a fringe NBA player who has little to no guaranteed salary. They’re trying to do whatever they can to impress their team’s decision-makers, while the uncertainty of the situation looms over them.

For undrafted free agents, second-round picks and veteran free agents trying to return to the NBA, there is a lot riding on the next few weeks. For players with job security, training camp and preseason action is about getting ready for the upcoming campaign. For the underdogs, all of their hard work has led to this moment as they fight for their livelihood. Every seemingly meaningless practice repetition, garbage minute and interaction with NBA team personnel could be a chance for these individuals to distinguish themselves from the herd.

When trying to make an NBA team, there are many factors that are out of a player’s control. However, when Basketball Insiders talked to underdogs who had achieved success against the odds, they pointed to their preparation and mental approach as two things they could control that would impact their chances of making the roster.

The Washington Wizards’ Clock is Ticking

Around this time last year, basketball in the nation’s capital looked poised to crest to its highest point since the 1970s. Fresh off a 46-win season and consecutive trips to the second round of the playoffs, the Washington Wizards boasted an ascendant backcourt led by incumbent All-Star starter John Wall, plus a solid mix of veterans and young talent. Most exciting of all, fans and management alike harbored real aspirations at luring D.C.-born megastar Kevin Durant back home in nine months’ time to form LeBron James’ most daunting Eastern Conference challenger to date.

Life comes at you fast, it turns out.

Even aside from Durant’s total lack of interest, a reality that became apparent well before team brass couldn’t even get a free agent meeting with him in July, these Wizards’ magic waned badly last year. A group many picked to face the Cavs in the Eastern Conference Finals even without a Durant-level talent instead missed the playoffs altogether in a confusing, frustrating year that saw out-of-his-depth head coach Randy Wittman finally get the axe at season’s end.

The Miami HEAT reached the NBA Finals in four consecutive seasons between 2011 and 2014 primarily due to their big three of Chris Bosh, Dwyane Wade and LeBron James. The league’s hierarchy has since undergone a seismic shift.

James departed two seasons ago, heading back home where he has led the Cleveland Cavaliers to back-to-back Finals appearances and a title. Wade bolted this past summer in free agency, feeling disrespected by Miami’s front office and joining his hometown Chicago Bulls to assist Jimmy Butler in getting the franchise back on track. Lastly, after two consecutive seasons cut short due to blood clot issues, Bosh’s future with the team is essentially over after a failed training camp physical and Miami’s brass publicly stating their intent to move on.

The Big Three is no more.

When an NBA player without a guaranteed contract is fighting for a roster spot, they have a very small window of time in which to prove themselves. For many of these fringe roster players, day one of training camp is the first time that they’re meeting the players, coaches and executives within their new organization.

The clock is ticking for them to make a positive impression.

However, that wasn’t the case for forward Zach Auguste, who entered the Los Angeles Lakers’ training camp a bit more comfortable than your typical undrafted rookie. Talk to people around the franchise and you’d think Auguste has been donning purple and gold for a while. But, in reality, the 23-year-old has yet to play a single second for the Lakers (even including the preseason opener, since he didn’t enter the game).