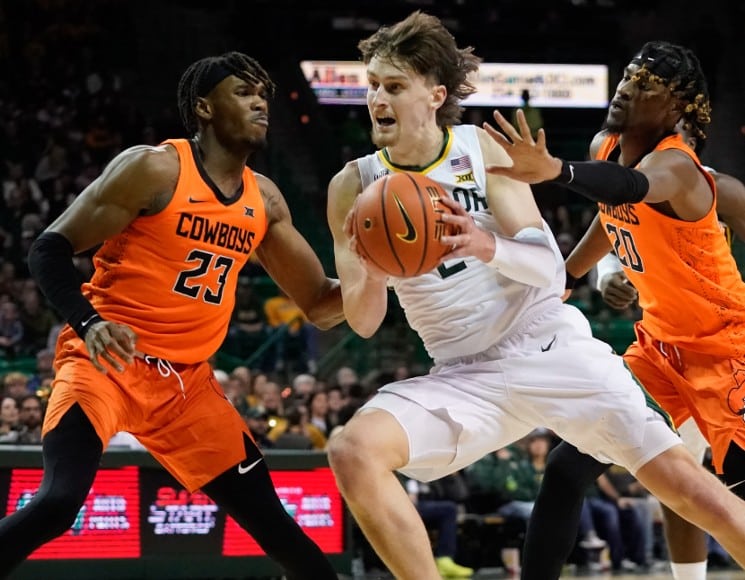 Will Dale Bonner and the Bears put an end to their head-to-head skid against the Cowboys? Including the starting lineups, our top NCAA picks and betting trends are available below.

Moreover, in the No. 7 Baylor Bears’ 72-62 home win over the TCU Horned Frogs on Saturday, Jeremy Sochan led his team in scoring with 17 points in 29 minutes played. Forward Matthew Mayer ended his performance with 16 points and 5.0 rebounds in 28 minutes spent on the court.

As for the Cowboys, on Saturday, in their 82-79 overtime win against the Kansas State Wildcats, guard Bryce Thompson scored a team-high 23 points in 38 minutes played. Guard Avery Anderson III also contributed 20 points, 7.0 rebounds sand 3.0 assists in 31 minutes of action.

Referencing ESPN’s Basketball Power Index, the Bears have a 73.3% chance of winning.

The Cowboys have won their last two matchups against the Bears. Nonetheless, they haven’t played as well over these past few couple of months. Their four-game losing streak finally came to an end after defeating the Sooners on Feb. 5.

Not to mention, heading into tonight’s rematch, Baylor is a five-point favorite on the road. The Bears have covered the spread in their previous five road matchups versus the Cowboys; they are 10-4 versus Big 12 opponents.

Taking everything into account, think about picking the Bears to win, they will cover the spread and the total will go over 138.5. If you want to learn the basics of basketball betting, read our handicap betting guide. Other NCAA picks are on the main page.