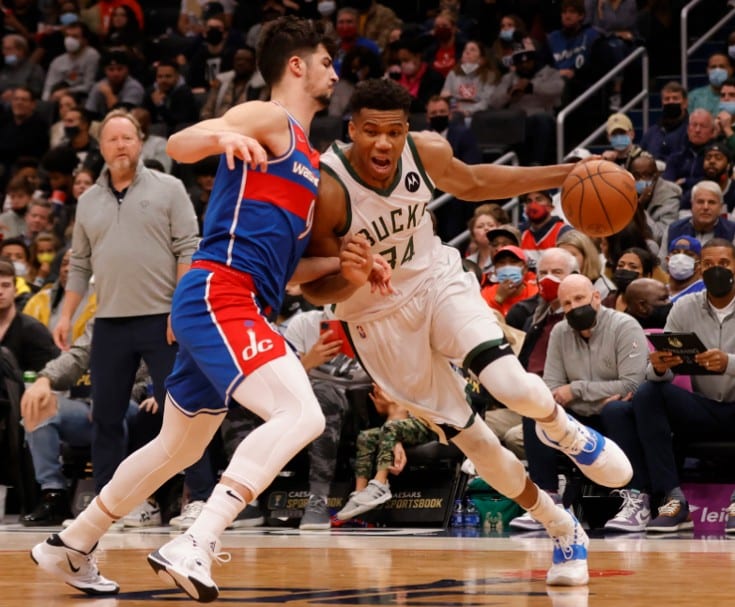 A seven game NBA Saturday slate awaits today, highlighted by the Milwaukee Bucks traveling to San Francisco to face the Warriors at the Chase Center. Other games on the docket include the Minnesota Timberwolves visiting the Miami Heat and the Cleveland Cavaliers going to Chicago for a matchup with the Bulls. Let’s look at some of these matchups and find the best bets for today’s slate.

For those interested in NBA betting today, we’ll break down some of tonight’s best bets.

Check out the betting guide from our experts to learn how to make the best NBA Picks.

In the lone nationally televised NBA game on Saturday, I am rolling with the Milwaukee Bucks (-130 at Betonline.ag) to beat the Golden State Warriors on the road. The Bucks are rolling, and are in a good spot to keep it going here.

Over the last ten games, the Bucks are 2nd in Offensive Rating and 17th in Defensive Rating. They’ve won their last six games, covering in all but one of them. This streak includes impressive wins over the Miami Heat, Chicago Bulls, Phoenix Suns and Atlanta Hawks. Giannis Antetokounmpo is also in the midst of some solid play, as he has scored 39 and 43 points in each of the last two games.

The Warriors, on the other hand, have not been great over the past 10 games. They are just 12th in Offensive Rating and 19th in Defensive Rating over that stretch. While they have won their last two games, one came against a sputtering Clippers team and the other in a revenge spot against the Denver Nuggets.

The Bucks will be too much for the Warriors to handle, and Milwaukee beat the brakes off the Warriors in Milwaukee on January 13th. Milwaukee’s length will make things difficult for Klay Thompson and Andrew Wiggins on the wings, and I expect the Bucks to have little issue scoring against a Warriors defense that hasn’t been playing great.

The Cleveland Cavaliers are in a really tough spot tonight. Just last night, they lost to the Miami Heat on the road, 117-105, despite giving everything they had. Darius Garland put up 24 points with 10 assists, while Evan Mobley dropped 17 on 7-12 shooting from the field.

But now they have to fly from Miami to Chicago and play a game against the Bulls tonight, who haven’t played since Wednesday. The Bulls are 10-7 ATS with a rest advantage this season, as well as 22-12 ATS at home, the best mark in the NBA. This Cavaliers team is missing Jarret Allen on both ends of the floor, and I think the Bulls will have no problem outlasting them and building a deficit over the course of this game.

It’s worth noting that Zach Lavine and Nicola Vucevic are both listed as questionable. If Lavine doesn’t play, I wouldn’t touch this number.