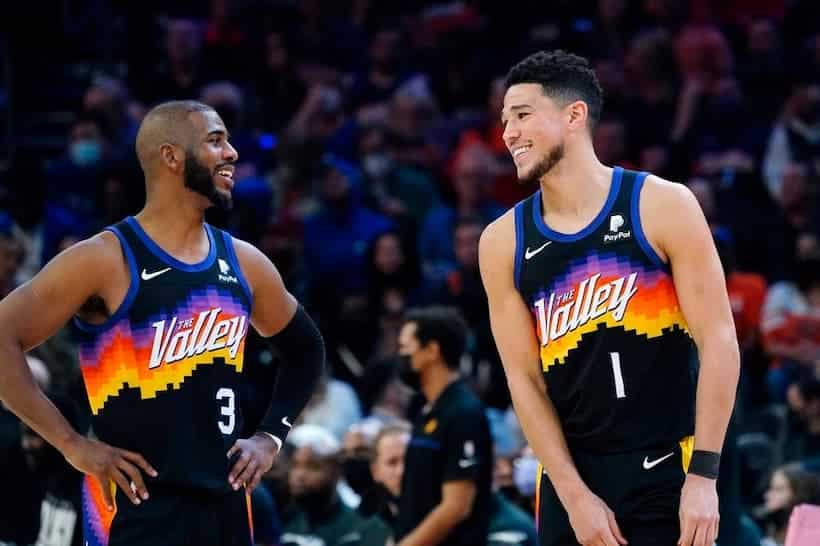 With Christmas Day on Sunday and no games being played on Saturday, we’ve got a jam-packed NBA slate on tonight with 14 different games happening. Tipping off on NBA TV at 7:30pm tonight are the 22-9 Milwaukee Bucks who are in Brooklyn to face the 20-12 Nets. Later on at 9:00, the 17-15 Trail Blazers will face Nikola Jokic and the 19-11 Denver Nuggets on the road. Finally, at 10:00pm on ESPN, the 19-11 Memphis Grizzlies have a matchup with the 19-13 Phoenix Suns tonight.

The Brooklyn Nets will host the Milwaukee Bucks at 7:30 tonight and both are top four teams in the Eastern Conference. Milwaukee comes into the game having won seven of their last ten games and are first place in the East. All-star SG Khris Middleton (knee) is doubtful to play for the Bucks tonight and Giannis Antetokounmpo (left knee soreness) is probable to play. Brooklyn has been playing their best basketball as of late. They’ve won nine of their last ten games and are on a seven-game win streak. The Nets are 15-6 vs Eastern Conference opponents this season but will have a tall task trying to beat the Bucks.  Yuta Watanabe (right hamstring tightness) is questionable to play vs Milwaukee tonight.

In the Western Conference right now, only 2.5 games separate the seventh and the first seed and six of the seven seeds top seeds have 19 wins on the season. One team right on the border of having 19 wins are the Portland Trail Blazers who are 17-15 this year. They’ve won six of their last ten but are on a two-game losing streak. Jusuf Nurkic, Josh Hart, Damian Lillard, and Drew Eubanks are all listed as probable to play tonight. Their opponent, the Denver Nuggets, are first place in the West right now and have the same record as the Memphis Grizzlies. Denver has won six of their last ten and are on a two-game win streak. Jeff Green (lower back pain) is probable and Jamal Murray (knee) is questionable.

Weather report brought to you by Unc pic.twitter.com/p31cJSZTt5

Memphis and Phoenix will meet tonight at 10:00pm for a matchup between two top four teams in the West. The Grizzlies come into tonight’s game with a 19-11 record and are second in the West. Ja Morant and the Grizzlies are 7-3 in their last ten, but are on a two-game losing streak. Desmond Bane (toe) is questionable to play vs the Suns tonight. Phoenix comes into the game with a bit of a cold streak happening. They are 4-6 in their last ten games which is still good enough for fourth place in the West. Cameron Payne (foot) and Devin Booker (groin) are out vs the Grizzlies tonight.