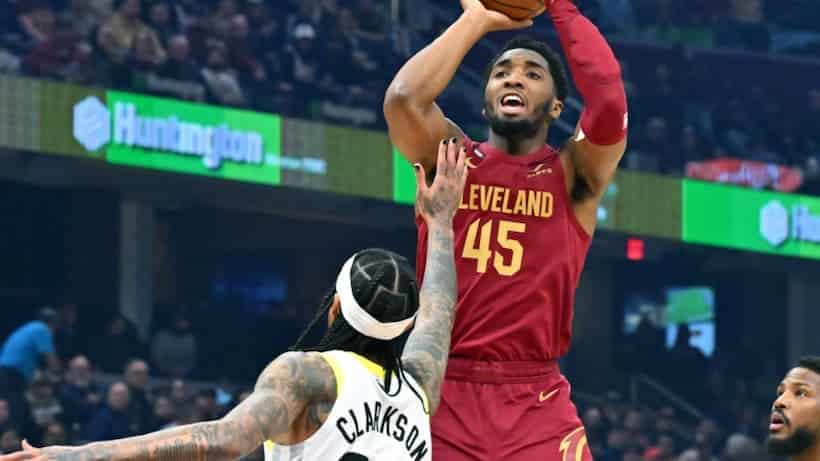 Our Tuesday night NBA slate will feature seven different games on across the league for fans to enjoy. At 9:00pm tonight, the 26-15 Cleveland Cavaliers are on the road tonight for their second and final matchup of the season with the 20-23 Utah Jazz. Being nationally televised on TNT at 10:00 are the 20-21 Phoenix Suns vs the 20-20 Golden State Warriors. Wrapping up the evening with a 10:30pm tip off are the 23-18 Dallas Mavericks who are in LA to face the 21-21 Clippers.

Donovan Mitchell and the Cleveland Cavaliers are on the road tonight to face the Utah Jazz for the second and final time this season. On 12/19, Cleveland beat the Jazz at home 122-99. Mitchell lead the team with 23 points that night. Ohio Sports Betting sites have the Cavs at (+1800) to win the Finals this season. This will also be Mitchell’s first game back in Utah since he left the team in the offseason. The Utah Jazz come into their matchup vs Cleveland tonight having one only three of their last ten games and are eleventh in the West. Tonight’s matchup is also a revenge game for Lauri Markkenan who was apart of the package deal for Mitchell. He’s having a breakout season with the team scoring (24.5) points per game.

The Phoenix Suns and the Golden State Warriors will face off for a third time tonight. Phoenix holds a 2-0 season series right now, but both teams are without their top scorers for this game. Devin Booker and Steph Curry are both dealing with injuries at the moment. It’s been catastrophic for the Suns without Booker. They are 1-9 in their last ten and are on a six-game losing streak. Golden State are also trying to hold their season together without their best player and it’s playing out better for them. At 20-20, the Warriors are sixth in the West and are on a two-game losing streak. Jordan Poole and Klay Thompson are both averaging (20.6) points for the Warriors while Steph Curry still deals with a shoulder injury.

A look at Tuesday's 7 game slate 👀

Luka Doncic and the Dallas Mavericks have been slowly climbing the ranks of the Western Conference and currently are fourth. At 23-18 they are 4.5 games back from the first place Denver Nuggets. Doncic one again is having an MVP caliber season for the Mavs as he leads the team in points, rebounds, assists, and steals per game. His (34.0) points per game lead the league this season. Dallas has also gone 8-2 in their last ten. Kawhi Leonard and the LA Clippers come into their matchup vs Dallas tonight on a six-game losing streak. The team is 21-21 and sit at seventh in the West. Paul George’s (23.7) points per game lead the Clippers this season. Leonard has yet to play 20 games still this season for LA as he’s missed a handful of games here and there. They’ll have home court advantage tonight to try and stop this losing streak.