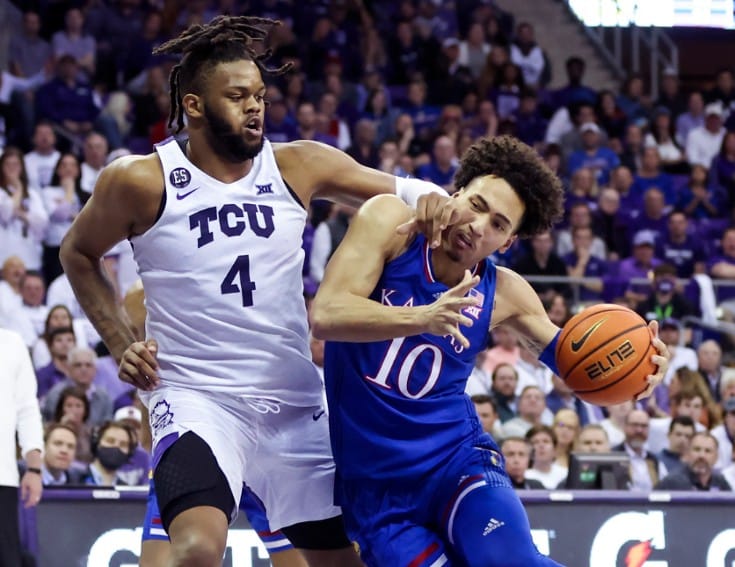 The 2022 Big 12 Conference tournament is set to begin on March 9th at the T-Mobile Center in Kansas City Missouri. Kansas will be coming into this one as the number one seed for this tournament while the Baylor Bears will come in as the number two seed after both of these teams had the same amount of wins during the regular season in the Big 12. Kansas got the tiebreaker and will have the number one seed. Although both of those two teams have clearly been the two best in the Big 12 this year, there are a few other teams who are going to make some noise in this tournament including Texas Tech, Texas, and even a few other teams if they do play their best basketball.

For a complete breakdown of the Big12 tournament schedule, scroll down below.

Baylor and Kansas are both going to be coming into this one at +200 odds to win the tournament. Both of them have played incredibly all year as they both finished 14-4 in conference play.

The Best NCAAB Bets for the 2022 Big 12 Conference Tournament

The best bet for the 2022 Big 12 tournament is going to be taking the Baylor Bears to win it all. Although Baylor is going to be coming in as the number two seed in the tournament, they did share a hold of the regular-season title in the Big 12.

They’re going to be coming in as the number three seed in the entire country. This team has clearly shown that they can beat anybody in the country when they are on their game and with how many of their guys have already been in positions like this in big-time games, I fully expect them to come through when it matters most.

Before we break down the best bets for the Big 12 Conference Tournament, check out some of the best free bets and sports betting bonuses available for March Madness games.

The favorite coming into the Big 12 tournament is going to be the Kansas Jayhawks and the Baylor Bears. Both of them are coming in at +200 on the books.

Not only is Baylor going to be coming in with the number two seed in the tournament and the number three team in the entire country, but this team has shown throughout the year that they are as good as advertised.

There is a reason why this Baylor team won the NCAA tournament a season ago, and although they did lose a few key pieces from that team, a few of these guys do have plenty of tournament experience and that is going to prove to be valuable for them and down the stretch.

Next, we’ll break down a few other contenders with a chance to take home the crown in the Big12 Tournament at the T-Mobile Center in Kansas City, Missouri.

The Texas Tech Red Raiders are going to be coming in as the number three seed to win this tournament. They finished the season at 23-8 and 12-6 in the conference including big wins against Baylor, Texas, West Virginia, Kansas, and a few other noteworthy teams.

March Madness betting is right around the corner. With an automatic bid to the NCAA Tournament on the line, we’ll go over a few sleepers that have the potential to run the table and win the Big 12 Men’s Basketball Tournament.

Texas Tech is coming into this one at +340 odds to win the Big 12 tournament. Although their odds are still comparable to both Kansas and Baylor, a lot of people are still sleeping on this team.

Texas Tech might not be the best team in the country, but with the wins that this team does have throughout the year and their ability to score the basketball at a high level, I fully expect them to be a team that could potentially win the Big 12 tournament. They’re going to be coming into this one after beating pretty much everybody in the Big 12 at least once this season.

The University of Texas Longhorns are going to be coming into this one at +550 Odds. Texas has been decent throughout the year as they finished 21-10 and 10-8 in the Big 12.

They did have a tough time against some of the other top teams in the Big 12 this year but they do still have wins over Kansas, Tennessee, and a few other noteworthy opponents.

Every year, a dark horse emerges as a potential upset candidate. While Iowa State hasn’t played as well as in years past, the Cyclones can still save their season by doing some damage in the conference tournament.

The Iowa State Cyclones have certainly not had the season that they were hoping for. They are currently 20-11 on the year and 7-11 in the Big 12. With all their losses coming in conference play, this is a major red flag for them if they are going to want to find the type of success that they are hoping for in this tournament.

However, this is still a team that has to be feared in the Big 12 because they have played a few noteworthy opponents very tough this year. They only lost by one against Kansas, five against Baylor, and also have impressive wins over Texas Tech and Texas.

In my personal opinion, I do think that either of the two favorites in Baylor and Kansas is going to win this tournament. It is always tough to pick a favorite in March because we all know what happens during this crazy month of college basketball, however, with how well both of these teams have played all season long, it seems inevitable that they’re going to meet in the Big 12 championship and whoever is playing better that day is going to win the tournament.

I am personally going to go with the Baylor Bears to win this tournament because this team does have plenty of experience of being in games like this.

As previously noted, although they did lose a few key players from the March Madness championship team a season ago, there are still a few returning players on this roster and that experience is going to prove to be very valuable for them down the stretch.