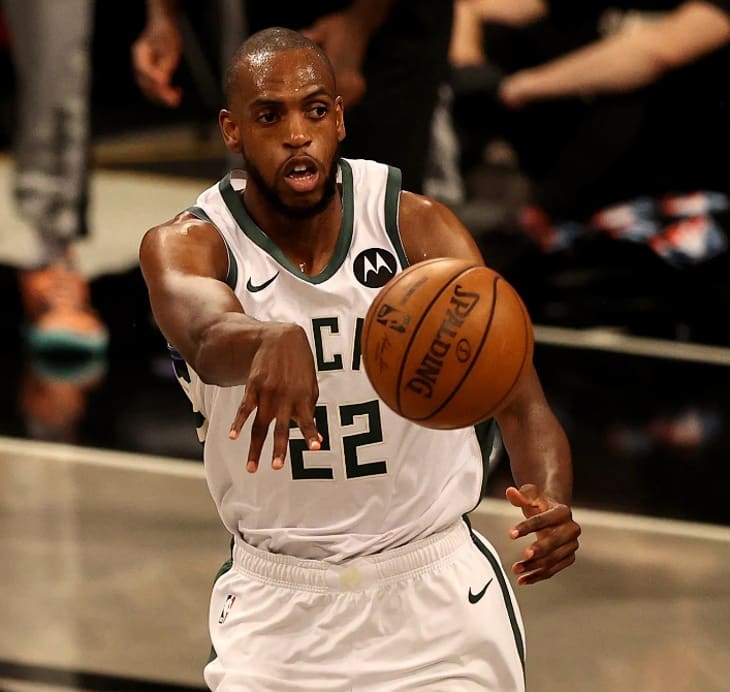 On Monday, Oct. 25, 2021, the Milwaukee Bucks (2-1) are playing the Indiana Pacers (1-2) at Gainbridge Fieldhouse. Tonight is the fourth regular season game for both Eastern Conference contenders of the 2021-22 NBA season. BetOnline odds are available below.

Leading into Monday night’s Eastern Conference thriller, the Bucks are 3-0 in their previous three games played head-to-head versus the Pacers. On May 13, 2021, the last time these two teams faced off in the regular season, Milwaukee won 142-133 on the road.

On Saturday, during the Bucks’ 121-111 win versus the Spurs, Khris Middleton passed Ray Allen for 10th on the team’s all-time scoring list. Allen had a total of 9,681 points. Middleton closed out his performance with a career total of 9,704 points.

Khris Middleton has passed Ray Allen for No. 10 on the Bucks all-time scoring list.

For the Bucks, center Brook Lopez and power forward Semi Ojeleye are out for this Eastern Conference matchup. Point guard Jrue Holiday is listed as doubtful. He is still recovering from an ankle injury. In addition to Holiday, shooting guard Donte DiVincenzo is out indefinitely. Center Bobby Portis was listed as probable, but he is now off the injury report. .

On the other side, Indiana power forward T.J. Warren is out indefinitely. Shooting guard Caris LeVert remains out, but he is expected to return after Indiana plays Milwaukee. Kelan Martin was also downgraded to out. The small forward is dealing with a hamstring injury.

Bucks injury report for tomorrow night’s game against the Pacers:

Moreover, on Saturday, in the Bucks’ 121-111 away win over the Spurs, forward Khris Middleton scored a team-high 28 points in 35 minutes on the court. Thus far, Middleton’s 28 points is his season-high, and as stated above, he became Milwaukee’s 10th-highest scorer all-time. Forward Giannis Antetokounmpo accumulated 21 points, 8.0 rebounds and 8.0 assists in 30 minutes played, too.

After analyzing the team statistics, the Bucks shot 44-for-83 (53%) from the field and 15-for-35 (42.9%) from behind the arc. They also out-rebounded the Spurs 44 to 38. While Milwaukee did outscore San Antonio, their defensive effort was nonexistent.

Meanwhile, in the Pacers’ 102-91 double-overtime victory over the Heat on Saturday, rookie guard Chris Duarte led the team in scoring, putting up 19 points in 41 minutes played. Plus, Malcolm Brogdon and Oshae Brissett each contributed 18 points as well.

In overtime, the Heat were held to five points, while the Pacers scored 16 points. This was a much-needed win for Indiana, considering it was their first regular season win of the 2021-22 NBA season. Domantas Sabonis also finished with his second double-double of the season, with 17 points and 12 rebounds.

For betting trends, Milwaukee is 6-1 ATS in the team’s last seven games. They are 6-1 straight up in their past seven games, too. Additionally, not only are the Bucks 7-2 ATS in their previous nine contests versus Indiana, they are 13-1 SU in their last 14 games against Central Division opponents.

As for the Pacers, they are 8-4 ATS in their past 12 contests. And, the total has gone over in seven of the team’s last eight games. Also, the total has gone over in four of Indiana’s previous five contests against Milwaukee. To add to these betting statistics, the Pacers are 1-7 SU in their past eight games played on a Monday. Therefore, think about the Bucks winning. Though, the Pacers could cover the spread.

Pick the Bucks to win on the road, the Pacers will cover the spread and the total will go over 229.5. Milwaukee is a 2.5-point favorite with BetOnline.