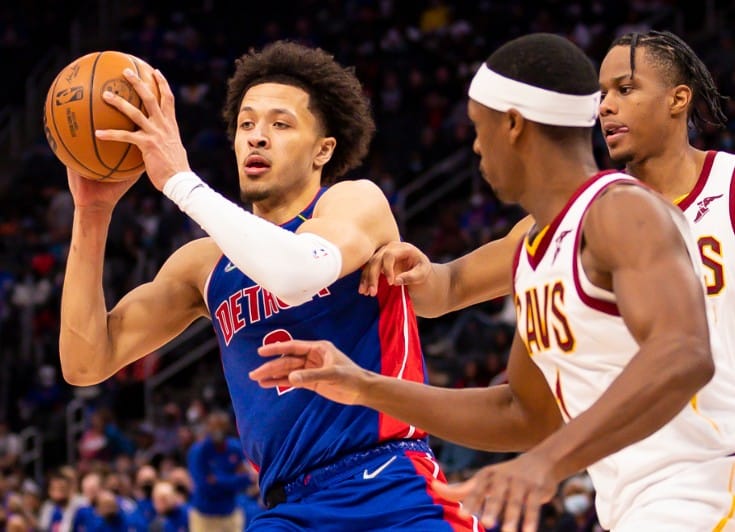 In tonight’s Eastern Conference mismatch, the Cleveland Cavaliers are facing off against the Detroit Pistons at Little Caesars Arena; NBA picks are posted here. Continue reading for Cavaliers vs Pistons preview content.

Without Darius Garland and Caris LeVert, can the Cavs eliminate their two-game losing streak? The Pistons are 0-5 in their past five home games. Along with the starting lineups, our top NBA picks and betting trends are viewable below.

All Cavaliers vs Pistons betting odds can be found at BetOnline

To add to the information above, in the Cavaliers’ 124-116 road loss against the Hawks last Tuesday, guard Darius Garland led his team in scoring with 30 points earned in 35 minutes played. Rookie forward Evan Mobley added another double-double to his career total, accumulating 22 points, 10 rebounds and 4.0 assists in 35 minutes spent on the court.

13 double-doubles in the first half for @evanmobley 👏@KeyBank | #LetEmKnow

Furthermore, last Wednesday, in the Pistons’ 112-111 upset road win over the Celtics, forward Jerami Grant scored a team-high 24 points in 29 minutes played. Grant sank the game-winning shot late in the fourth quarter. Saddiq Bey and Cade Cunningham each ended their performances with 20 points as well.

According to ESPN’s Basketball Power Index, the Cavaliers have a 60% chance of winning.

Next, Detroit has won just two of its last 10 contests. The Pistons’ victory over the C’s snapped their eight-game losing streak. Nonetheless, losing close games has been the top story for the Pistons all season long. Fortunately for bettors putting money down on Detroit to win, Cleveland will be without Darius Garland and Caris LeVert. Now, the Pistons are 8-20 at home, 5-25 away and 14-14 ATS at home.

Referencing other head-to-head matchups, in the previous three meetings, the Pistons are 2-1 versus the Cavaliers. This is quite a shock, especially considering that Cleveland has a great team this season. On Jan. 30, 2022, the last time these teams played one another, the Pistons won 115-105 at home.

Not to mention, the Cavaliers are six-point favorites on the road. The Pistons have won just 11 games this season when playing as underdogs. One thing that should be said is that Detroit has the healthier team. So, no one should rule out a potential upset. The Pistons could beat them a second time.

In conclusion, pick the Cavaliers to win, they will cover the spread and the total will go over 208. If you have never placed a bet on a basketball game, skim through our handicap betting guide. Other NBA picks are on the main page.