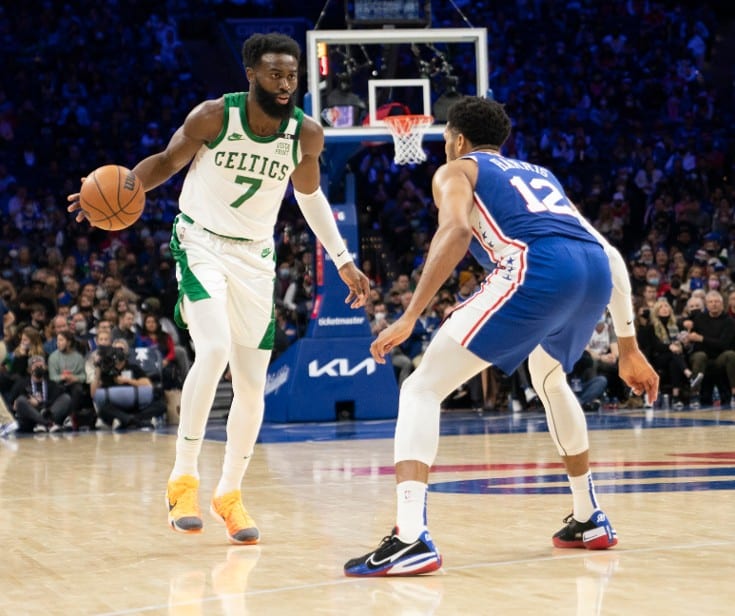 In tonight’s Eastern Conference rematch, the Boston Celtics (33-25, 28-29-1 ATS) are playing the Philadelphia 76ers (34-22, 28-28 ATS); NBA picks are featured here. Will Jayson Tatum and the Celtics win their ninth consecutive game? Including the starting lineups, our top NBA picks and betting trends are available below.

All Celtics vs 76ers betting odds can be found at BetOnline

Furthermore, in the Celtics’ 105-95 home win over the Hawks on Sunday, forward Jayson Tatum added another double-double to his career total. He accumulated 38 points, 10 rebounds and 3.0 assists in 40 minutes played. Guard Jaylen Brown finished his performance with 17 points, 9.0 rebounds and 3.0 assists in 38 minutes on the court as well. Boston has won 10 of its previous 11 contests. In addition to their eight-game winning streak, the team is 13-15 away, 20-10 at home and 15-13 ATS on the road.

For the Sixers, on Saturday, in their 103-93 home win versus the Cavaliers, center Joel Embiid closed out his outing with a triple-double. The top MVP candidate amassed 40 points, 14 rebounds and 10 assists in 33 minutes played. Guard Tyrese Maxey also contributed 16 points, 2.0 rebounds and 2.0 assists in 33 minutes spent on the court. Philadelphia has won seven of its past 10 games. On top of winning back-to-back games, the 76ers are 16-12 at home, 18-10 away and 11-17 ATS at home this season.

According to ESPN’s Basketball Power Index, the Celtics have a 50.7% chance of winning.

Pertaining to other head-to-head meetings, in the last three matchups, the 76ers are 2-1 against the Celtics. On Jan. 14, 2022, the third time these teams met during this regular season, Philadelphia won 111-99 at Wells Fargo Center. The Celtics defeated them on Dec. 1, 2021, winning 88-87 at TD Garden.

In other news, the Celtics have not lost a game since losing to the Hawks 108-92 at State Farm Arena on Jan. 28. Plus, they rank sixth overall in the Eastern Conference, trailing the top-seeded Heat by 4.5 games. Thus far, there is more parity in the league this season.

The #bostonceltics come to #Philly as the #NBA’s hottest team, riding an eight-game winning streak and winners of 10 of their last 11 games. The #Celtics’ lone loss was a 108-92 setback at the #AtlantaHawks on Jan. 28.

Heading into Tuesday night’s clash, Boston is still a two-point favorite on the road. Aside from defeating the Heat and upsetting the Suns, the C’s have appeared mediocre over the past several months. Tonight’s game could be a statement win for Boston. In conclusion, contemplate picking the Celtics to win, they will cover the spread and the total will go over 210. If you want to learn more about basketball betting, read our handicap betting guide. Other NBA Picks are on the main page.