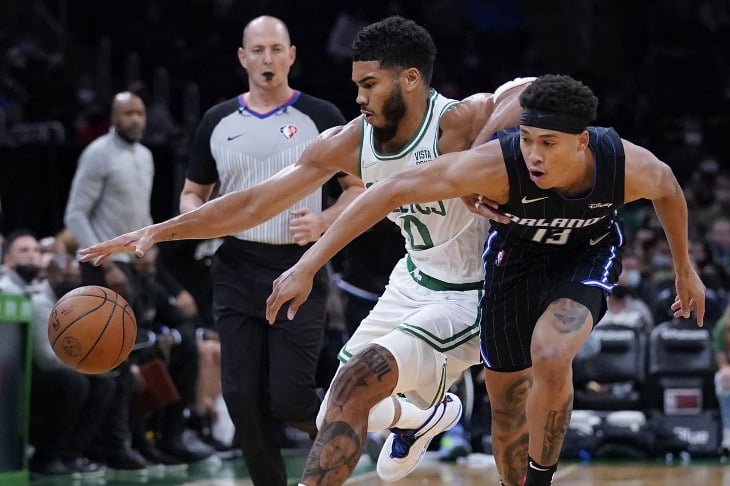 ESPN’s Basketball Power Index: Celtics have a 55% chance of winning

Referencing Land of Basketball’s database, based on a total of 120 regular season games played between these two Eastern Conference teams, the Celtics are 69-51 versus the Magic. In the previous three head-to-head meetings, Boston is also 3-0 against Orlando. On May 5, 2021, the last time these teams faced off, the Celtics won 132-96 on the road. While the C’s are 7-3 overall in their past 10 head-to-head contests, they are on a three-game losing streak.

Leading into Wednesday night’s matchup, the Celtics have a lot of unanswered questions, and the available solutions could potentially jeopardize their entire season. After the team’s 128-114 loss to the Bulls on Monday, Celtics point guard Marcus Smart called out teammates Jaylen Brown and Jayson Tatum. He wants them to play better. Ideally, the entire roster needs to step up their performances. If they lose to the Magic, it will extend their losing streak to four games.

Additionally, for the Celtics, they have no players listed on the injury report. Though, the team is not without their problems. If anything, Boston might have too much adversity to overcome right now. They have dominated the Magic several times in the past, but the C’s are playing awful defensively. Tonight’s Eastern Conference matchup is not a given for Boston.

Next, for the Magic, they have three players listed as questionable: E’Twaun Moore, Michael Carter-Williams and Gary Harris. To add to the report, power forward Jonathan Isaac and point guard Markelle Fultz are out indefinitely. Both injured players are still recovering from knee injuries.

The Boston Celtics injury report for Wednesday’s game at Orlando is clean. No players listed.

Furthermore, in the Celtics’ 128-114 home loss against the Bulls on Monday, guard Jaylen Brown led his team in scoring, finishing with 28 points in 34 minutes played. Forwards Jayson Tatum and Al Horford each scored 20 points as well. Horford accumulated 10 rebounds and 3.0 assists in 33 minutes of action, too. However, Boston was outscored 39 to 11 in the fourth quarter.

Meanwhile, on Monday, in the Magic’s unexpected 115-97 road victory over the Timberwolves, guard Cole Anthony scored a team-high 31 points in 38 minutes spent on the court. Forward Franz Wagner also contributed 28 points, 4.0 rebounds and 2.0 assists in 31 minutes played. Orlando scored 43 points in the fourth quarter alone. This was a much-needed win.

On top of holding the Timberwolves to 19 fourth-quarter points, they shot 37-for-82 (45.1%) from the floor and 17-for-43 (39.5%) from behind the arc. The Magic’s performance marked the team’s fourth consecutive game with at least 15 made threes — a new milestone in franchise history was reached. Their win over Minnesota was only the team’s second win of the season, but it did snap their four-game losing streak. The Magic are now 2-4 away and 0-2 at home.

As for the Magic, they are 4-11 ATS in their last 15 games. Also, the total has gone over in eight of the team’s past 10 games. And, the total has gone over in four of the previous five contests against the Celtics. For something else to consider, Orlando is 1-13 SU in their last 14 games played at home. Lastly, they are 2-4 ATS in their past six games played on a Wednesday. Therefore, contemplate picking Boston to win and for Orlando to cover the spread.

Pick the Celtics to win on the road, the Magic will cover the spread and the total will go over 215. Boston is a 6.5-point favorite with BetUS.