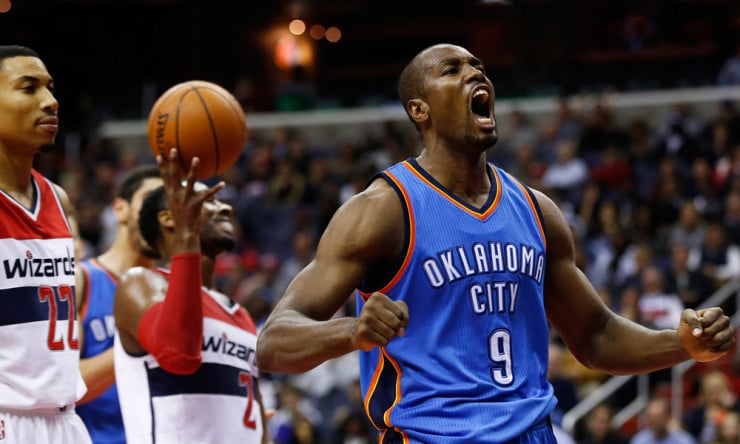 Each Wednesday, we’re helping you build your DraftKings lineups for the upcoming night of action. The point of these articles is to highlight relatively cheap players who are poised to do well given their recent success and upcoming matchup.

Everyone wants top players like LeBron James, Stephen Curry and John Wall in their lineup, but in order to afford those players, you’ll need some of these value plays on your squad as well.

If you haven’t done so already, be sure to enter our DraftKings league before 7 p.m. ET tonight. It is $3 to play (or FREE for new users) and it has a $20,000 first-place prize. Here are six bargain players to keep an eye on tonight – all of whom will cost you less than $6,000:

With so many top point guards available tonight, this may be the position where you want to splurge on a star rather than going with a cheap option. Russell Westbrook, Steph Curry, John Wall, Damian Lillard and Kyle Lowry are among the best point guards set to play this evening.

However, Teague could be a guy to keep an eye on in your guard or utility slots. His price tag has slipped a little bit, likely due to his drop in playing time. He’s logged over 30 minutes just twice during the month of January, but he still is a productive option given his price tag. He’s turned in five-straight outings with at least 23.8 fantasy points and is a player who can contribute in a number of ways. He could be a good option for you at the guard position.

Johnson has been the direct beneficiary of a depleted Miami HEAT backcourt. He’s earned two straight starts for the HEAT with starting point guard Goran Dragic and backup point guard Beno Udrih out due to injuries. In a season-high 39 minutes on Sunday, Johnson contributed 16 points, six assists and four rebounds, which translated to 28.5 fantasy points.

This isn’t the first time that we’ve included Johnson in our DraftKings preview. He’s been one of our most consistent options to use this season. We highlighted him last week against the New York Knicks and he put up 33.8 fantasy points after recording 14 points, seven rebounds, six assists and one steal.

He’s been extremely productive and reliable over the past several weeks, as he’s turned in seven straight outings with at least 20 fantasy points. With his price tag at $5,100 tonight, we’re going to roll with Johnson once again.

Ibaka should be a player on your radar this evening. He comes in probably as cheap as we’ve seen him this season, so tonight seems like a good time to play him. Over his last six games, Ibaka has scored at least 22.3 fantasy points in each contest. Ibaka is a player that can still rack up fantasy points even with a sub-par showing offensively. Last night in Denver, Ibaka scored just four points, but added 10 rebounds, three assists and two blocks for 24.5 fantasy points.

Ibaka and the Thunder face a good matchup tonight, as the Charlotte Hornets are ranked 23rd against opposing power forwards. Ibaka has been extremely reliable this season, averaging 28.1 fantasy points per game. Since December 21, he’s turned in only two games with less than 20 fantasy points.

Plumlee is coming off of one of his best all-around outings of the season. He recorded 10 points, 11 rebounds, seven assists and one block on Monday night against the Wizards, which was good for 38.8 fantasy points. He’s a prime candidate to earn the bonus points DraftKings hands out for double-doubles, as he’s recorded 12 such games this season.

Plumlee faces a very good matchup tonight against an Atlanta Hawks team that ranks 21st against opposing centers. These two teams previously met back on December 21 and Plumlee erupted for 37 fantasy points during that game. Look for Plumlee to have another solid outing tonight.

Morris seems to be playing much better as of late after missing a game last week with a sore knee. He’s averaging 29 fantasy points over his last three outings and has played at least 38 minutes in each of those games. Morris faces a great matchup tonight since the Houston Rockets rank dead-last in the league against small forwards. Look for Morris to continue his hot play tonight