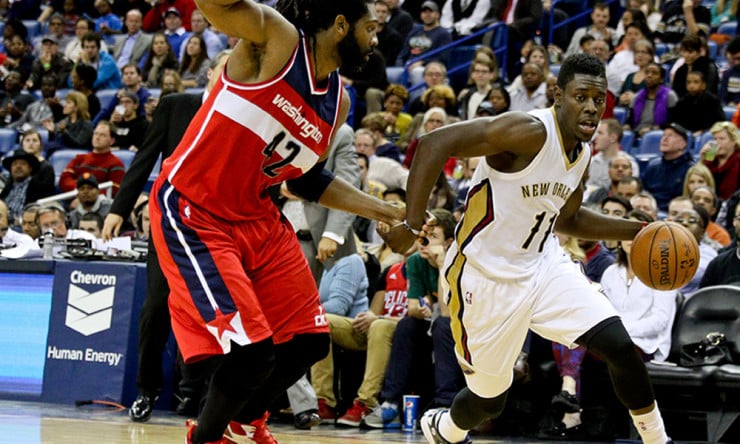 Each Wednesday, we’re helping you build your DraftKings lineups. These weekly articles are designed to help target some of the best value plays. Having some cheaper players in your lineup is often the key to taking home cash.

There are 12 games tipping off tonight, which will leave you with plenty of options in drafting your team. This article will shine the light on those players who will cost you less than $6,000. With several of the top players in the league in action tonight, you’ll need to have a few of these guys on your team.

If you haven’t done so already, be sure to enter our DraftKings league before 7 p.m. ET tonight. It is $3 (or free for new users) and it has a $100,000 first-place prize. Here are six cheap plays to keep an eye on tonight:

It seems as though Holiday’s minutes will no longer be restricted this season. It was announced prior to the start of the season that Holiday would be limited in the early going, but Pelicans head coach Alvin Gentry has confirmed that Holiday will be given the green light moving forward. Holiday was held out of a game earlier this month against the Houston Rockets, and then again last Saturday as both games were the second of back-to-back sets. In between those games, he’s played at least 22 minutes in five outings, including a season-high 29 minutes on Monday against the Portland Trail Blazers.

It seems like the time is now to use Holiday as a DraftKings option before his price tag rises given his likely increase in playing time. Holiday has played in five out of seven games in the month of December, and is averaging 15.4 points, 4.6 assists, three rebounds and 1.8 steals in 26 minutes per game. He’s averaged 30.6 fantasy points per game over this stretch and has shot 57 percent from three-point range, including five three-pointers last Friday. Take advantage of Holiday and his low price tag while you can.

Felton recently moved into the starting lineup and has since made the most out of his opportunity. He became a starter seven games ago, and is averaging 31.2 fantasy points over that time frame. Included in that stretch is a triple-double performance against the Wizards on Saturday as he recorded 10 points, 11 rebounds and 11 assists, which was good for 45.8 fantasy points.

During his time as a starter, Felton is averaging 11.6 points, 5.9 rebounds, 5.9 assists and 1.4 steals per game. It’s clear that Felton isn’t going to be a triple-double threat all that often, but he’s going to give you production all across the stat sheet, which will help rack up the fantasy points. Felton faces a great matchup tonight against the Indiana Pacers, who rank 28th against opposing shooting guards. Given his recent hot streak and favorable matchup tonight, Felton should be a guy you target with so few top options at shooting guard.

Barnes has produced very well in two games since moving into the starting lineup. Grizzlies head coach Dave Joerger made the change likely in an attempt to jump start the team’s offense. Joerger opted to go smaller with Barnes starting for Tony Allen and Courtney Lee starting for Zach Randolph.

Over his last two games, Barnes has put up 42.8 and 36.5 fantasy points, respectively. He scored a season-high 20 points in a win over the Wizards on Monday, and added six rebounds, two assists, two steals and a block. Aiding him in those 20 points was Barnes hitting a season-high four three-point shots. DraftKings rewards bonus points for three-pointers made, which should play well for Barnes in your lineup tonight as he faces a Bulls team that ranks 26th against opposing small forwards.

We’ve gone with Mirotic here over the past couple of weeks, and he’s been a solid contributor given his price tag. He seems nearly a lock to give you about 20 fantasy points with his ability to contribute all over the floor. On the season, he’s averaging 11.5 points, 6.4 rebounds and 1.5 assists per game, which has translated to 24.2 fantasy points per game.

Since leaving the game early on Dec. 2 against the Denver Nuggets, Mirotic has turned in six-straight performances with at least 20 fantasy points. He’s coming off of a 22.5 fantasy point performance on Monday, in which he knocked down a season-high five three-pointers. He’s shown he can get hot at times, but Mirotic is one of the best bets you can go with as he’s been extremely consistent this season.

Pachulia has also been another frequent name on our value picks. He’s averaging a double-double on the season with 10.4 points and 10.4 rebounds and is also adding nearly two assists and a steal per game. DraftKings gives bonus points for double-doubles, which makes Pachulia a good add as he’s third in the league with 14 double-doubles.

Caldwell-Pope could be worth a look for you tonight if you don’t want to overspend in your utility slot or at shooting guard. He’s second in the league in minutes per game, which allows him plenty of chances to put up numbers for your fantasy team. He’s going to give you a little bit of everything, as he’s averaging 13.5 points, 3.3 rebounds, two assists and 1.8 steals per game. He’s had at least 25 fantasy points in each of his last three outings, including a 49.3 point performance on Saturday against the Los Angeles Clippers.

Let me know how your team did by reaching out to me on Twitter, @CodyTaylorNBA.

Massive $5 Double Up: In this league, anyone who finishes in the top half of the field doubles their $5 entry fee, winning $10. CLICK HERE TO DRAFT YOUR TEAM.