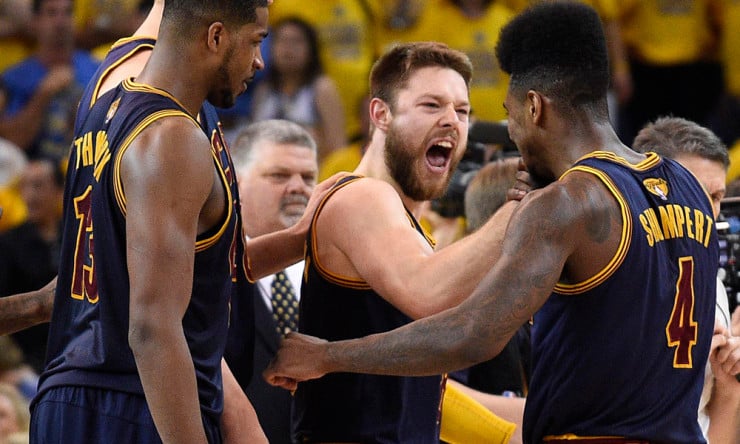 Only five games on the NBA slate tonight, so not all that many options to choose from. Nonetheless, there are still plenty of under-priced gems to play on DraftKings, which is critical to winning either large tournaments or smaller contests.

As you’re building your team and trying to stay under the $50,000 salary cap, here are some great value plays to keep in mind.

PG: Matthew Dellavedova – salary $4,800
The Cavs have announced Kyrie Irving will sit out tonight to rest, which means Delly will get the starting nod. Dellavedova has started 10 games in place of Irving this season, and in those 10 contests he is averaging 10.5 points and 6.3 assists while playing 31.3 minutes per contest. Respectable numbers with a high floor and solid upside, especially considering the Cavs are playing the Nuggets, who like to run-and-gun and have been fantasy friendly to opposing point guards this season.

SG: Arron Afflalo – salary $4,800
Afflalo’s production has been up-and-down of late. Over his last four games, he is shooting just 31.1 percent from the field and has made just one of his last 14 three-point attempts (7.1 percent), which is the reason he can be had for $4,800. However, his minutes have remained steady. He’s played at least 32 minutes in eight of the Knicks’ last nine games. Afflalo’s numbers on the season are solid, so it’s worth betting that he breaks out of his slump versus Detroit tonight. In addition, the Knicks need him, as he has been an important X-Factor for the team. The Knicks are 7-2 in the nine games in which Afflalo has scored at least 15 points. New York is just 1-10 in the 11 games in which he scored fewer than 13 points.

SF: Jeff Green – salary $5,400
With Matt Barnes suspended tonight (due to his off-the-court confrontation with Knicks coach Derek Fisher), Green will likely have an opportunity to see extended court time. Green has played 35 minutes or more on five occasions this season. He has scored at least 15 points in each of those five games (averaging 20 points per game), which makes Green a great plug-and-play option tonight.

PF: Tristan Thompson – salary $5,000
Cavs coach David Blatt has slid Thompson into Cleveland’s starting lineup, replacing the ineffective Timofey Mozgov. We know TT won’t light up the scoreboard, but he is a rebounding machine. Thompson has started four games this season and is averaging 12.8 rebounds in those four games, while chipping 7.8 points on 55.4 percent shooting.

C: Enes Kanter – salary $4,900
Kanter’s minutes still are an issue (he’s yet to play more than 26 minutes in any game over the past five weeks), but the offensive-minded big man has made the most of his sparse playing time, especially of late. Kanter is averaging 17.7 points and 10.7 rebounds over the Thunder’s last three contests. During that stretch, he is shooting over 65 percent from the floor and 90 percent from the free-throw line. Things are trending up for Kanter, but his price still sits below five grand.