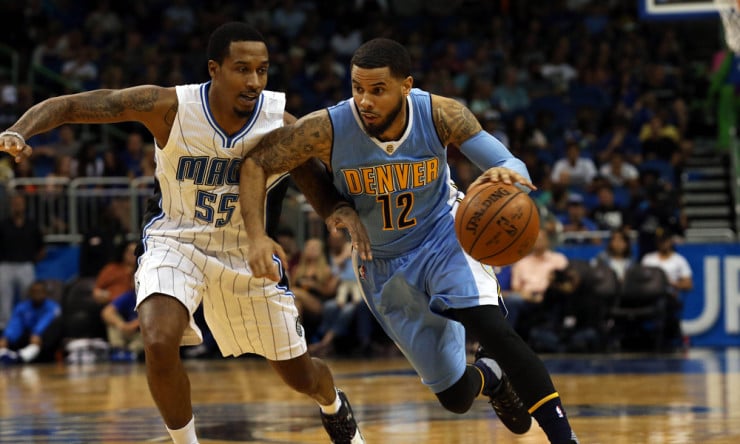 Each Wednesday, we’re helping you set your DraftKings lineups. The idea behind these articles is to highlight some cheap players who figure to perform well given their upcoming matchup. With 12 games set to tip off tonight, you’ll have plenty of options when building your rosters.

Having these lower-priced players on your squad will help you go after the top guys like Stephen Curry, LeBron James, John Wall and others. These players listed below will all cost you less than $6,000.

If you haven’t done so already, be sure to enter our DraftKings league before 7 p.m. ET tonight. It is $3 to play (OR FREE FOR NEW USERS) and it has a $10,000 first-place prize. Here are six cheap players to keep an eye on tonight:

Smith has been a player we have relied heavily on this season. Before his value jumped over our $6,000 limit, he was putting up big numbers on a relatively low price. Now his price tag is within our budget again, which will you give you a very reliable option in a favorable matchup. Smith has scored at least 20 fantasy points in each game since February 21 (a span of 16 games) and has scored over 30 fantasy points in 11 of those 16 games.

He’s a player who can still be productive despite low-scoring games. In the Sixers’ last game on Monday, he scored only four points, but still added nine rebounds, four assists and three steals, which was good for 26.8 fantasy points. Smith and the Sixers face a Denver Nuggets team that ranks 21st against opposing point guards, so look for Smith to continue his strong play tonight.

It looks like Beal could be working his way back to form after suffering some injuries this season. He turned in one of his better outings of the season on Monday against the Hawks, recording 25 points, three rebounds and an assist, which was good for 32.8 fantasy points. Perhaps the most encouraging thing about his performance was he shot 10-of-15 from the field, including 5-of-6 from three-point range.

Over his last four outings, Beal has looked much better and is averaging 31 fantasy points per game over that stretch. The Wizards will face off against the Hawks again tonight, so Beal could have another great game again. Make sure to keep an eye on his status closer to tip off as he’s listed as questionable, but that could just be a precautionary measure.

With so many of the top small forwards in action tonight, this could be where you want to go cheaper. Tucker could be your guy as he’s been playing well lately in an increased role and faces a great matchup against a Los Angeles Lakers team that ranks 28th against opposing small forwards.

Over his last four games, he’s averaging 32 fantasy points per game. Tucker and the Suns just faced off against the Lakers on Friday night and he turned in 13 points, six rebounds, a steal and a block, which was good for 25 fantasy points. He looks poised to have another good outing tonight and keep his successful run over the past week going.

After joining the Wizards at the trade deadline about a month ago, it seems like Morris is finally getting settled into his new team. He’s become exactly the player that the Wizards traded for, as he’s been able to give the team an added scoring punch and another solid defender in the starting lineup.

He’s coming off of one of his best fantasy performances with the Wizards. On Monday against the Hawks, he had 14 points, seven rebounds, three steals and a block, which translated into 31.3 fantasy points. Over the past month, Morris has scored lower than 20 fantasy points only four times, so he could give you solid production at a low price tonight.

Plumlee has been playing very well over the past couple of weeks, and comes in tonight at a very low price of $4,600. This could be another position where you want to go cheaper, since there are so many of the top names available tonight at center.

Plumlee is coming off of his best fantasy outing of the season after recording 14 points, a career-high 19 rebounds, two assists, a block and a steal on Sunday against the Mavericks. He’s averaging nearly 29 fantasy points over his last six outings. Plumlee and the Blazers play the Mavericks again tonight, so he could have another great outing.

Augustin comes in at a very low price of $4,800 so he may be a guy you try to squeeze in somewhere in your lineup. He’s been a completely different player since being traded to the Nuggets at the trade deadline as he’s improved his scoring from 4.2 points with the Oklahoma City Thunder to 12.9 points per game in Denver.

He’s scored at least 20 fantasy points in each of his 11 games in March, and has thrown in a handful of games with at least 30 fantasy points during that stretch as well. He faces off against one of the worst teams in the league against points guards in the Sixers, so look for Augustin to give you great production at a good price.

We encourage you to give these players a look as you build your starting lineups for tonight. Here are three contests you can enter tonight: