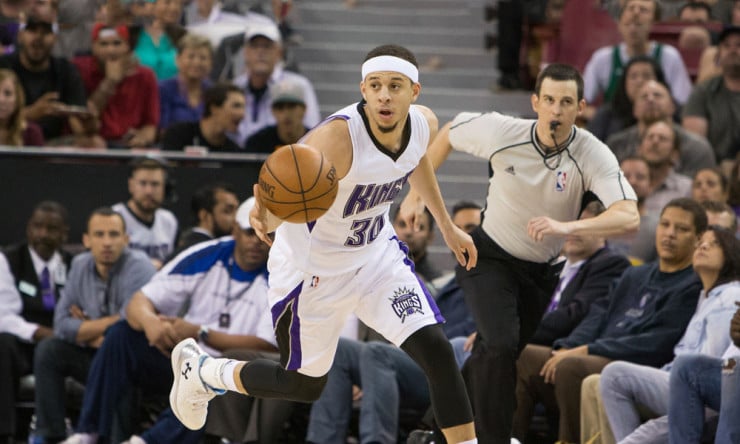 Each Wednesday, we help you build your DraftKings lineups for the upcoming night of action. The point of these articles is to highlight relatively cheap players who are poised to do well given their recent success and upcoming matchup.

Tonight features 14 games on the schedule as most teams wrap up their regular season. With nearly every team in action tonight, you will have plenty of options when building your DraftKings rosters. Everyone wants superstar players in their lineup, but in order to afford those players, you’ll need some of these value plays on your squad as well.

If you haven’t done so already, be sure to enter our DraftKings league before 7 p.m. ET tonight. It’s FREE for new users! Here are six bargain players to keep an eye on tonight – all of whom will cost you less than $6,000:

With the Kings shutting down five of their top scorers for the rest of the season, look for Curry to continue to see plenty of playing time. Curry is coming off of his best game in the NBA in which he recorded 20 points, 15 assists, three rebounds and three steals on Monday night against the Phoenix Suns.

Curry’s career night was good for 54.3 fantasy points. Since March 25, Curry has seen a much bigger role with the Kings as he’s averaging 28.7 minutes per game after playing sparingly before that. He’s averaging 15.7 points, 3.7 assists and 2.4 rebounds per game while shooting 54 percent from three-point range during that time frame.

Before you laugh at this selection, consider what we know going into Bryant’s last game. It’s been reported that Lakers head coach Byron Scott plans on letting Bryant play as much as he wants and Scott stated on the record that he’s instructing other players to “get KB the ball.” Knowing the type of player that Bryant is, he’ll want to play big minutes and go out with an impressive performance. Field goal percentage isn’t factored in for DraftKings’ scoring system, so Bryant can shoot it as much as he wants without negatively impacting your team.

He has flashed some vintage Kobe performances a couple of times already this month, as he dropped 35 points on the Houston Rockets on Sunday and he scored 34 points against the Boston Celtics back on April 3. The Utah Jazz desperately need a win tonight (as well as a Houston loss against Sacramento in order to make the playoffs), and Bryant would love nothing more to player spoiler one last time in front of the home crowd at Staples Center. It’s also worth noting that Utah will be without their defensive anchor Rudy Gobert. This is the final time you can have Kobe in your lineup and he may be a steal at $5,000.

Bazemore has been arguably one of the best fantasy players over his last four games for the Hawks. Over this stretch, Bazemore is averaging 17 points, eight rebounds, 3.8 assists, 2.8 steals and 1.5 blocks per game, which has translated to 41 fantasy points per game.

Bazemore has proven this season that he can contribute on both ends of the floor and make his presence felt in a variety of ways. On April 1 against the Cleveland Cavaliers, he scored only seven points, but added 12 rebounds, six assists and three blocks, which was good for 36.5 fantasy points. The Hawks should continue to play their starters with playoff seeding on the line heading into the final night of action.

Williams is another starter who you can count on playing since the Hornets are still fighting for playoff seeding. Some of the league’s best players could be getting some rest tonight with playoff positions already locked up, but Williams seems likely to play as he normally would.

Williams has been very consistent over his last six outings, as he’s scored at least 24 fantasy points in each of those games. The Hornets are up against the Orlando Magic tonight, and Williams went off for 26 points, nine rebounds, two assists and a block the last time the Hornets and the Magic faced off on March 16.

Plumlee has been very productive over the past several weeks. Since March 1, Plumlee has scored fewer than 20 fantasy points just twice (in a span of 21 games). He’s a guy who comes in at price lower than $5,000 and he seems likely to give you at least 20 fantasy points.

The Pelicans have been ready for the offseason for quite some time now given all of the injuries they have endured this season. Douglas has been a direct beneficiary of those injuries, starting in 17 out of the Pelicans’ last 18 games.

Douglas has turned in four-straight outings with at least 30 fantasy points and has been one of the team’s leading scorers in each of those games. Look for that production to continue as the Pelicans face off against a Minnesota Timberwolves team that ranks 26th against opposing point guards.

We encourage you to give these players a look as you build your starting lineups for tonight. Here are contests you can enter now: