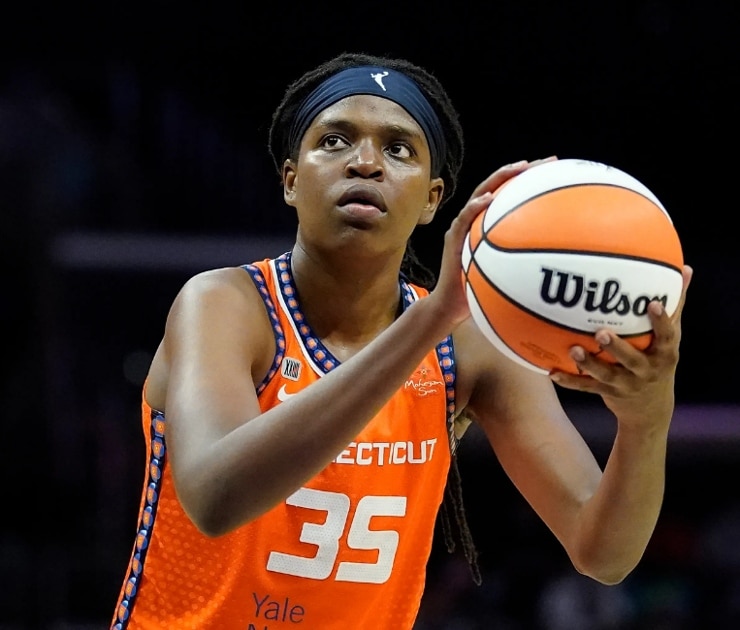 On Sunday, Oct. 3, 2021, the WNBA semifinals will continue; free WNBA playoffs picks are on the main page of Basketball Insiders. In Game 2, the Connecticut Sun evened the series versus the Chicago Sky. The Sun-Sky matchup starts at 1 p.m. ET. Later, the Aces-Mercury contest begins at 3 p.m. ET. Both games will air live on ESPN2. Bovada game lines are featured down below.

For Game 3, the Sun are 2.5-point favorites. In Game 2, the Sun defeated the Sky, winning 79-68 inside Mohegan Sun Arena. Heading into Thursday night’s game, the Sun were 7.5-point favorites. Both DeWanna Bonner and Alyssa Thomas led Connecticut in scoring, ending their performances with 15 points a piece. Thomas also had 11 rebounds and 6.0 assists in 24 minutes played.

Guards Briann January and Jasmine Thomas scored 12 points as well. Forward Jonquel Jones⁠—the 2021 WNBA MVP winner⁠—finished her night with 4.0 points, 7.0 rebounds and 4.0 assists in 24 minutes played. Furthermore, the Sky were held to only nine points in the fourth quarter.

Moreover, in Game 1 of the series, Chicago defeated Connecticut 101-95 in double-overtime. That win for the Sky snapped the Sun’s 14-game winning streak. For noteworthy betting trends, the Sun are now 6-1 against the spread in their last seven games played. They are also 13-1 straight up in their past 14 games and 5-0 overall in their previous five road games.

For the Sky, they are 9-4 ATS in their last 13 games versus the Sun. Plus, they are 4-1 SU in their past five games, 6-11-1 ATS in their previous 18 games and the total has gone over in 10 of the team’s previous 13 home games. In other news, there are no reported injuries for either team. Pick the Sky to win Game 3, the Sun will cover the spread and the total will go over.

The Aces are one-point favorites in Game 3. In the Mercury’s 117-91 blowout win in Game 2, guard Diana Taurasi scored a team-high 37 points. She also earned 6.0 rebounds and 1.0 assist in 27 minutes played. Center Brittney Griner had 25 points, 7.0 rebounds and 5.0 assists in 26 minutes on the court. The Aces were held to only 13 points in the fourth quarter.

Additionally, for the Aces, Kelsey Plum ended her performance with 25 points, 1.0 rebound and 3.0 assists in 30 minutes. On Thursday, Plum won Sixth Player of the Year. She had multiple bench performances with at least 20 points. Anyways, guard Riquna Williams contributed 17 points in the Aces’ 26-point loss.

For notable betting trends, Las Vegas is 1-4 ATS in their last five games played. The team is also 5-1 SU in their previous six games, 4-1 SU in their past five away games and the total has gone over in six of their last eight games.

As for Phoenix, the team is 4-1 ATS in their past five games, 13-4 SU in their previous 17 games and the total has gone over in four of their last six games. Despite the Mercury pulling off the upset on the road in Game 2, the Aces could very well bounce back on the road, too. Pick the Aces to win, the Mercury will cover the spread and the total will go over. Other free WNBA playoffs picks can be viewed here.

Click Here To Get Free Bonus Up To $1,000
James Foglio