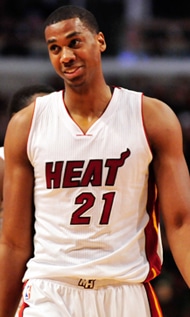 After bursting onto the scene a year ago, Hassan Whiteside, the Miami Heat’s projected starting center, is aiming to make his preseason debut this weekend. He’ll have two opportunities to do so, as the Heat plays the Rockets Saturday and the Hawks Sunday. Whiteside has been battling a calf injury for much of training camp.Though, it’s probably the goal to get him back Saturday against Houston, as it isn’t likely for the majority of the Heat’s starters to play in the second game of a preseason back-to-back on Sunday.