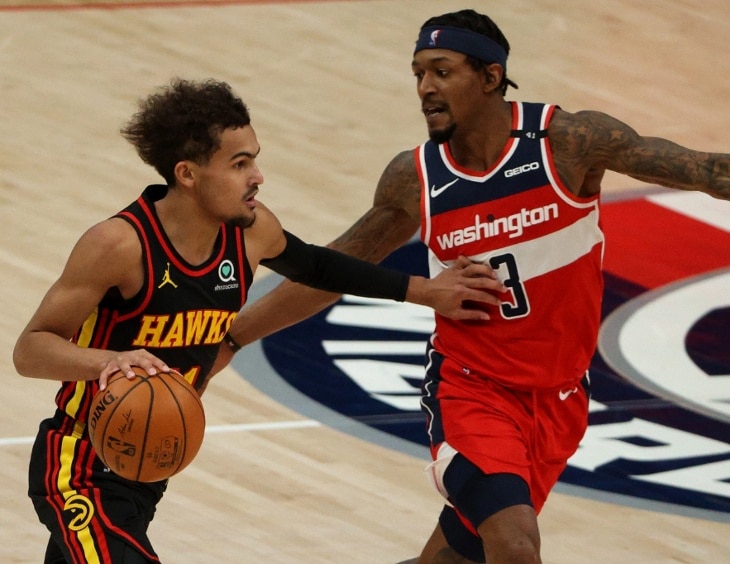 Heading into Thursday night’s intraconference matchup, the Hawks are 3-0 versus the Wizards in their previous three head-to-head meetings. On May 12, 2021, the last time these teams played one another during the regular season, Atlanta won 120-116 at home. Plus, the Hawks are 6-4 against the Wizards in the past 10 meetings. Referencing Land of Basketball statistics, Washington has not defeated Atlanta since Mar. 6, 2020.

For the Hawks, point guard Lou Williams is listed as questionable to play in tonight’s game. And, center Onyeka Okongwu is out indefinitely. Retrieved from Basketball-Reference, Okongwu’s 2021-22 statistical projection is 14.7 points, 9.3 rebounds, 1.7 assists, 1.4 steals and 1.8 blocks per game this season. He is expected to miss the first two months of the regular season.

On the flip side, for the Wizards, they have six players listed as questionable: Spencer Dinwiddie, Raul Neto, Thomas Bryant, Rui Hachimura, Cassius Winston and Anthony Gill. However, Hachimura is out because of a personal reason. Per sources, Dinwiddie is on the list for possible rest. To add to the list, center Daniel Gafford is listed as doubtful to play versus Atlanta. So, Gafford might not play.

Tomorrow is the game against ATL.

Additionally, on Wednesday, in the Hawks’ 102-99 road win over the Pelicans, guard Trae Young led his team in scoring, ending his performance with 31 points in 36 minutes played. Forward John Collins also contributed 16 points, 12 rebounds and 4.0 assists in 25 minutes of action. While the Hawks were outscored 33 to 19 in the opening quarter, they scored a combined 65 points in the following two quarters.

Meanwhile, in the Wizards’ 116-107 road win over the Celtics on Wednesday, Montrezl Harrell scored a team-high 25 points and 11 rebounds in 38 minutes spent on the court. Guard Spencer Dinwiddie finished his night with 22 points, 3.0 rebounds and 3.0 assists in 30 minutes played.

Furthermore, the total for today’s Eastern Conference match is set at 222. According to the spread consensus, 74% of bettors are expecting the Hawks to cover the spread. Regarding the point total consensus, 57% of gamblers are predicting the total will go over 222. As selected favorites, Atlanta is 3-1 in the regular season. Though, Washington is 3-1 as an underdog. This sounds like quite a dilemma.

For betting trends, the Hawks are 3-6 ATS in their last nine games. The total has gone under in 10 of the team’s past 14 contests. Atlanta is also 2-4 ATS in the team’s previous six games played versus Washington. To add to these betting statistics, the total has gone under in eight of their last nine matches played in October, and the Hawks are 8-0 straight up in their past eight contests against Southeast Division opponents.

As for the Wizards, they are 4-2 ATS in their last six games. Also, the total has gone under in six of the team’s past nine games played versus Atlanta. And, the Wizards are 8-3 SU in the team’s previous 11 contests played on a Thursday. Not to mention, the total has gone under in eight of Washington’s last nine games against Atlanta at Capital One Arena. Based on everything, Atlanta is the fairer bet.

Pick the Hawks to win on the road again, the Wizards will cover the spread and the total will go under 222. Atlanta is a three-point favorite with BetOnline.