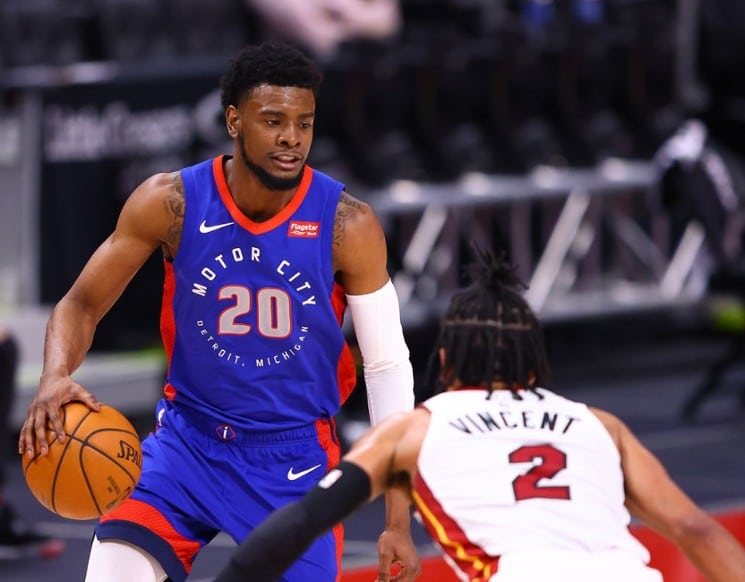 ESPN’s Basketball Power Index: Heat have a 70.4% chance of winning

Upon further review of Land of Basketball’s database, these Eastern Conference teams have played one another 117 times all-time in the regular season. The Heat are 62-55 versus the Pistons. In the past three head-to-head meetings, Miami is 2-1 against Detroit. On May 16, 2021, the last time these teams met during the regular season, the Heat defeated the Pistons 120-107 at Little Caesars Arena. Additionally, Miami is 6-4 in the team’s last 10 head-to-head contests against Detroit.

Besides team records, the top story for the Pistons pertains to the league office suspending center Isaiah Stewart for two games over his altercation with Lakers forward LeBron James. This event occurred during the third quarter of the Lakers’ 121-116 win. Stewart received his suspension for “escalating an on-court altercation by repeatedly and aggressively pursuing Los Angeles Lakers forward LeBron James in an unsportsmanlike manner.” Likewise, James was also issued a one-game suspension.

As expected, no Isaiah Stewart on Tuesday for Pistons vs. Heat: pic.twitter.com/uUP9ruvXi7

#Pistons Killian Hayes (left thumb sprain) is expected to miss at least the next two games.

Moreover, on Saturday, in the Heat’s 103-100 road loss versus the Wizards, forward Jimmy Butler scored a team-high 29 points in 38 minutes played. Tyler Herro also ended his performance with 20 points, 5.0 rebounds and 3.0 assists in 30 minutes of action. In the fourth quarter, Washington outscored Miami 32 to 25. Statistically, the teams were about even, based on the box-score game statistics.

The Heat shot 38-for-81 (46.9%) from the field and 7-for-27 (25.9%) from behind the arc. Not to mention, Miami finished with fewer turnovers. Though, one contributing factor that led to the Heat’s loss is personal foul calls; they closed out their night with 26 fouls called against them. The team’s loss to the Wizards snapped their four-game winning streak. Now, they are 5-5 away and 6-4 ATS away this season.

As for the Pistons, in their 121-116 home loss against the Lakers on Sunday, forward Jerami Grant led his team in scoring, putting up 36 points in 37 minutes spent on the court. Frank Jackson accumulated 15 points and 2.0 rebounds in 26 minutes played as well. As stated above, the top story after this game was Lakers forward LeBron James elbowing Pistons center Isaiah Stewart in the face during the third quarter.

Both players were ejected and later suspended. Yesterday, James received a one-game suspension for initiating contact, whereas Stewart was issued a two-game suspension for pursuing James. Anyways, the Pistons shot 43-for-97 (44.3%) from the floor and 14-for-40 (35%) from three-point range. Plus, the Lakers out-rebounded them 51 to 39. This loss dropped Detroit to 2-7 at home and 4-5 ATS at home.

Furthermore, the total for tonight’s intraconference contest is set at 207. After viewing the spread consensus, about 68% of bettors are anticipating the Heat will cover the spread at Little Caesars Arena. Regarding the point total consensus, 65% of gamblers are thinking the total will go over 207. Leading into this matchup, Miami is 7-5 as a selected favorite, 4-1 as an underdog and 6-4 ATS away, whereas Detroit is 1-0 as a favorite, 3-12 as an underdog and 4-5 ATS at home.

On the other side, the Pistons are 4-16 SU in their previous 20 performances. Also, the total has gone over in four of their last five games. And, they are 1-6 SU in their past seven games played at home. Next, Detroit is 6-14 ATS in the team’s previous 20 contests when playing as the underdog, and they are 2-4 ATS in their last six matches versus Southeast Division opponents. All things considered, contemplate picking the Heat to win and cover the spread.

Pick the Heat to win on the road, they will cover the spread and the total will go over 207. Miami is a 10-point favorite with BetUS.