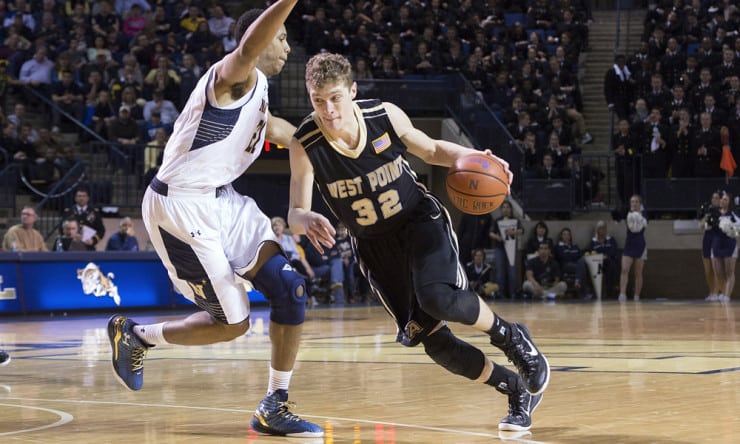 One of the most intriguing storylines in the 2016 NBA draft class is likely one you haven’t heard about yet.

Tanner Plomb, a 6’7 swingman who spent the past four years at West Point playing for the Army, entered the NBA draft after a strong senior season and hoped to hear his named called in the second round on Thursday night. However, he went undrafted and is now hoping to make the league via a strong Summer League showing. If his professional basketball career doesn’t take off, he will fulfill his commitment to the Army.

“I’m very determined,” Plomb said. “Playing in the NBA is pretty much every basketball player’s dream, but it’s been mine for my entire life. I want to make it more than ever because I know that I won’t have as many opportunities as some of these other players. I know that I have to push for this, otherwise I’ll start my career with the Army. If my basketball career doesn’t work out, then I will be going to Fort Sill in Oklahoma for Field Artillery Training for four and a half months. After that, I’d go to Fort Benning in Georgia for Airborne School for three weeks and then be stationed in Grafenwoehr, Germany for three years with a field artillery unit. At any point while I’m stationed in Germany, the army could deploy me and my unit to many different parts of the world to fight against the enemies of our country.

“If that happens, I’m ready for that too. Everything we have done has really prepared us, and I still have some training left to do. When you graduate from West Point, there’s so much emotion built up and so much time that has been put into training and you feel like you’re finally ready. You accept that it’s going to happen and look forward to your future, and especially the people who you’ll be with. There’s more of a readiness to move on rather than any [hesitancy].”

Plomb is a very good athlete with a three-point shot that improved every year he was in college, to the point that he was hitting nearly three shots from long range per game as a senior. This past year, he averaged 19.8 points and 5.8 rebounds with a 21.4 efficiency rating and 110.2 offensive rating. He was selected to the All-Patriot League First Team for his efforts.

He worked out for the Boston Celtics, Dallas Mavericks and Utah Jazz among others and did well. He compares working out in front of well-known GMs and coaches to the presentations he had to give in front of higher-up generals at West Point. He added that with everything he’s been through and what may be ahead, an NBA workout or Summer League invite isn’t nerve-racking.

Plomb didn’t consider a career in the military until their coaching staff reached out to him in order to express their interest. It was only then that he decided to join the Army.

“I’ve been in love with basketball my whole life, back to the Little Tikes hoop days,” Plomb said. “I always had a hoop – in the basement, on a door somewhere – and I was always playing. Then, I saved up enough money where my dad allowed me to put half a court and hoop in the back yard. My love for the game just kept growing through middle school to high school to college and still today. I hadn’t really considered joining the military at all until I received a call from the coaching staff. They were talking to me, asking me, ‘Do you have any interest?’ I was hesitant and unsure about it, just as any teenage kid who’s in love with the game would be. But they talked me into coming out for a visit, and I met the coaching staff, faculty, players and I saw the campus. It’s one of the most beautiful things ever and there’s so much history there. Everything about it is really special and you can just feel it when you’re there. It was too good of a thing for me to pass up, too good of an opportunity.”

Because he was at West Point, he had a very different college experience than every other player in this draft. He believes that his experiences and military background can really help him as he tries to achieve his NBA goal.

“I thought I experienced a huge growth while I was there,” Plomb said. “I ended up starting my first six games when I was there, but I didn’t have that much confidence in myself at that time. I was still trying to adjust to the college game and didn’t think I’d be able to impact the game that much right away. But as I progressed there and matured more – as a person and as a basketball player – I learned that I can give a lot back to this game and to my team. I think I was able to really contribute more as I progressed, with my scoring, leadership, defense, everything. I felt like I was adding more and more to our program as the years went on.

“My relationships with people have gotten stronger and stronger as time has gone on. I’m able to communicate better, know how to work with other people better and understand where other people are coming from. But other than that, I think it really matured me as a person and forced me to grow up a little earlier than some of these other people may have had to. I know that in a few years or a few months, depending on what happens with basketball, people’s lives may actually be in my hands. I understand that you have to be mature and responsible, not just for yourself but for the people around you. I feel like that’s one of the main things that the Army has taught me, worrying about more than just yourself.”

Plomb said that he believes he can be a productive 3-and-D role player in the NBA, and named Mike Miller as one of the players who he has modeled his game after.

“I feel like I can be a player that knocks down open shots and on the other end bust my butt defending whoever I need to, which should translate well to the NBA,” Plomb said. “That’s become more important and popular, the Three-and-D guy.

“I like watching superstars to see everything they bring to the game, but guys like Mike Miller and others like him are the guys [I study] because you see how hard they work, how bad they want to win and how they’ll do anything for their team. Whatever guys like that are asked to do, they’ll do, and they make the most of every situation they’re. I watch people like that and model my game after theirs.”

Zach Spiker, who was the head coach at Army before accepting the head coaching job at Drexel in March, had nothing but positive things to say about Plomb.

“Tanner is a terrific basketball player, but a better person,” Coach Spiker said. “Whenever he has gotten an opportunity, he has done nothing but excel. To me, it’s no surprise to see NBA teams show interest in him. He represents everything that is right about West Point and the Army. He has a service heart, puts other before him and is a professional.

“He graduated as one of our best three-point shooters and was one of the most explosive athletes in the Patriot League. He improved every year that he was there. He was a candidate for Player of the Year in League play from sophomore year on. He has shown that he makes the most of every opportunity he’s given. If he has the time to focus on one thing, I think he’ll excel and continue to make huge strides.”

Plomb and everyone close to him (such as his agent Russell Slayton and mentor Pete Strobl from The Scoring Factory, a training facility in Pittsburgh) hope he can make it in the NBA, not only so he can accomplish his life-long dream but because he can use his platform to make a big impact as well.

“Basketball players have a great influence on our society,” Slayton said. “People line up for days to spend their last dime on their favorite player’s sneaker. If Tanner makes it to the NBA, he can be a positive role model for our country. I want our culture to be influenced by people like him.”