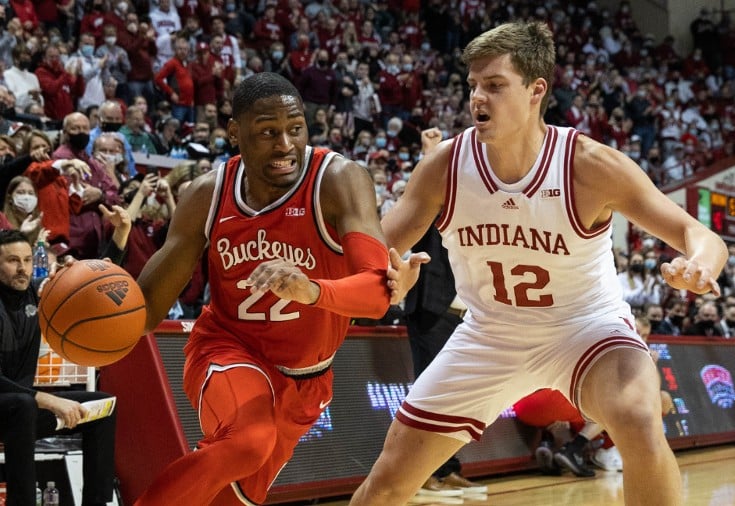 Will Race Thompson and the Hoosiers put an end to their four-game skid? Along with the starting lineups, our top NCAA picks and betting trends are posted below.

All Hoosiers vs Buckeyes betting odds can be found at BetOnline

Moreover, last Tuesday, in the Indiana Hoosiers’ 74-69 home loss against No. 15 Wisconsin Badgers, forward Trayce Jackson-Davis scored a team-high 30 points in 34 minutes played. Forward Race Thompson also closed out his performance with 13 points and 8.0 rebounds in 31 minutes of action.

Indiana has won only four of its past 10 games. In addition to their four-game losing streak, the Hoosiers are now 2-6 away, 13-3 at home and 1-7 ATS on the road.

Meanwhile, in the No. 18 Ohio State Buckeyes’ 75-62 home loss versus the unranked Iowa Hawkeyes, guard Malaki Branham led his team in scoring with 22 points earned in 35 minutes played.

Forward EJ Liddell contributed 15 points, 8.0 rebounds and 1.0 assist in 35 minutes on the court. Ohio State has won six of its last 10 contests. Including this upset defeat, the Buckeyes are 11-1 at home, 4-5 away and 7-5 ATS at home this season.

According to ESPN’s Basketball Power Index, the Buckeyes have a 76% chance of winning.

Next, in the previous three head-to-head matchups, the Buckeyes are 2-1 against the Hoosiers. On Jan. 6, 2022, the last time these teams faced off during this regular season, Indiana defeated Ohio State 67-51 at Simon Skjodt Assembly Hall.

On the flip side, the Buckeyes won 78-59 at home on Feb. 13, 2021. Though, last month’s meeting is more relevant than other performances.

Regarding Ohio State’s upset loss at home, head coach Chris Holtmann told reporters after the game, “We just didn’t play with enough force or physicality, and that’s my fault. We’ll live to fight another day.”

With this loss, the Buckeyes became the last Big Ten team to lose in their own stadium this season.

This defeat was puzzling; the team was held to 24 points in the second half. They now rank fifth overall in the Big Ten.

Leading into Monday night’s rematch, Ohio State is a 6.5-point favorite at home. Fortunately, the Buckeyes will have the chance to bounce back against the struggling Hoosiers. Their four-game losing streak is duly noted.

Interested in betting on the Ohio State team? – Don’t miss out on reading our guide about sports betting in Ohio first!

All things considered, contemplate picking the Buckeyes to win, they will cover the spread and the total will go over 135.5. To learn more about basketball betting, read our handicap betting guide. Other NCAA picks are on the main page.