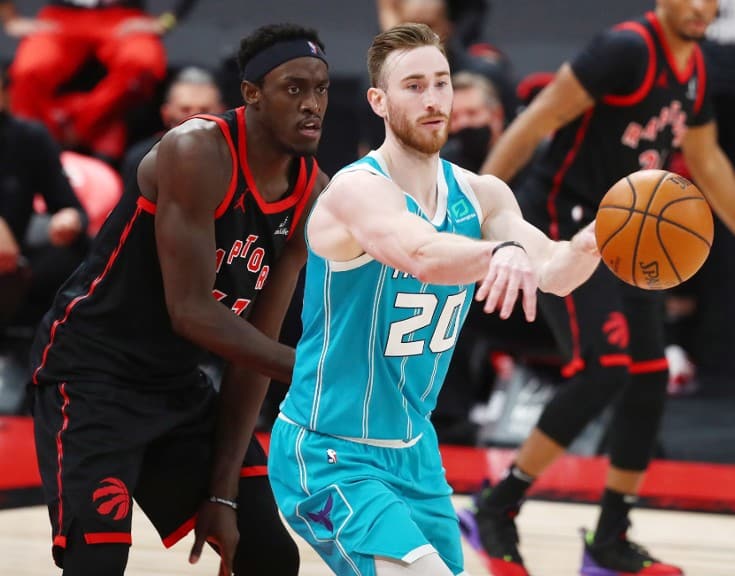 In Tuesday night’s Eastern Conference contest, the Charlotte Hornets (26-21, 29-18-1 ATS) are facing off versus the Toronto Raptors (22-22, 23-20-1 ATS); NBA picks are available here. Which team will win the first head-to-head meeting this season? Along with the starting lineups, our top NBA picks and betting trends are featured below.

All Hornets vs Raptors betting odds can be found at BetOnline

Additionally, in the Hornets’ 113-91 home loss versus the Hawks on Sunday, both Miles Bridges and LaMelo Ball ended their performances with 19 points. Ball also accumulated 6.0 rebounds and 4.0 assists in 34 minutes on the court. This rare blowout loss to Atlanta snapped their three-game winning streak. They have won seven of their last 10 games. As a result of this defeat, the team is now 13-7 at home, 13-14 away and 14-13 ATS away.

As for the Raptors, on Sunday, in their 114-105 home loss against the Trail Blazers, center Pascal Siakim led his team in scoring, putting up 28 points in 34 minutes of action. Guard Fred VanVleet closed out his performance with 19 points, 5.0 rebounds and 8.0 assists in 42 minutes played. The Raptors remain inconsistent. Toronto has won five of its past 10 games. Counting this loss, the team is now 12-12 at home, 10-10 away and 12-12 ATS at home this season.

Referencing ESPN’s Basketball Power Index, the Raptors have a 53.7% chance of winning.

In the past three head-to-head meetings, the Raptors are 2-1 against the Hornets. However, these teams have not played one another during this regular season. On Mar. 13, 2021, the last time these teams faced off, Charlotte won 114-104 at Spectrum Center. If for some reason tonight’s game goes to overtime, the Hornets statistically have the advantage. In overtime contests, Charlotte is 4-1 versus Toronto all-time.

In other news, Hornets forward Gordon Hayward has a chance of returning to the court for tonight’s game against the Raptors. He is currently listed as questionable on the team’s injury report. Head coach James Borrego remains hopeful that his starting forward will play soon, but the 31-year-old has quite a long history of dealing with injuries. Fortunately for the fanbase, at least his right foot injury is not an MCL sprain or ACL tear. So far this season, Hayward is averaging 17 points, 4.7 rebounds and 3.7 assists per game.

Gordon Hayward (right foot discomfort) is listed as questionable for tomorrow's game against Toronto. James Borrego said earlier today they were hopeful he'd play tomorrow. Hayward was held out of their light workout prior to the #Hornets leaving for Toronto this afternoon.

But, the Raptors’ .500 record at home is not convincing indecisive bettors. Overall, the Hornets have the healthier roster, too. Based on the number of contests Charlotte has won lately, the team is more than capable of upsetting Toronto. Therefore, the Hornets will win, cover the spread and the total will go under 221.5. If you are new to sports betting, read our handicap betting guide. Other NBA Picks are on the main page.