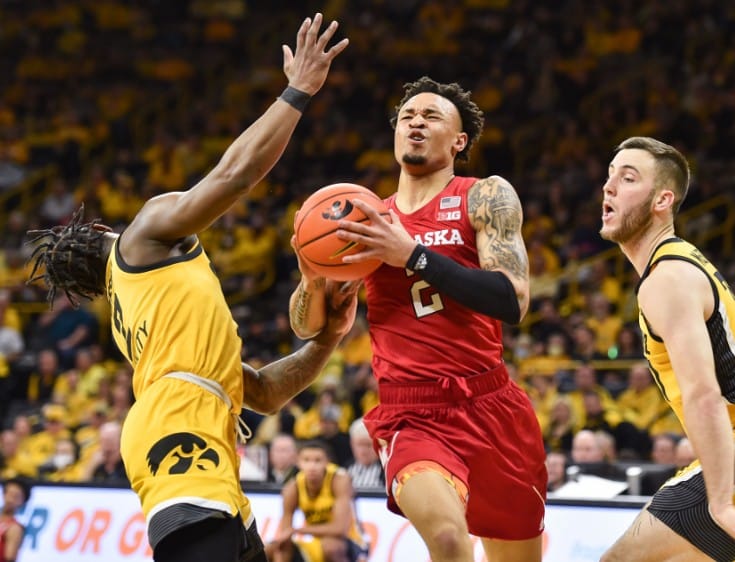 In tonight’s Big Ten Conference rematch, the No. 25 Iowa Hawkeyes are taking on the unranked Nebraska Cornhuskers; NCAA picks are featured here. Continue scrolling for Hawkeyes vs Cornhuskers preview content.

Will the Hawkeyes defeat the Cornhuskers for the fourth straight time? Nebraska is 1-7 in its previous eight home games. In addition to the starting lineups, our top NCAA picks and betting trends are available below.

All Hawkeyes vs Cornhuskers betting odds can be found at BetOnline

Heading into tonight’s mismatch, the No. 25 Iowa Hawkeyes are aiming to extend their win streak to three games. On Tuesday, in the team’s 86-60 home win over the Michigan State Spartans, forward Keegan Murray scored a team-high 28 points in 30 minutes on the court. Both Jordan Bohannon and Kris Murray accumulated 11 points in their performances as well.

Iowa has won six of its past 10 games. No team is without its issues, though. The Hawkeyes’ last loss was on Feb. 17, when they lost 84-79 against Michigan. Including this victory versus the Spartans, the ranked team is now 4-5 away, 14-3 at home and 5-4 ATS on the road this season.

Furthermore, in the Nebraska Cornhuskers’ 77-65 road loss against the Northwestern Wildcats, guard Bryce McGowens finished his performance with a double-double. He piled on 15 points, 10 rebounds and 4.0 assists in 33 minutes of action. Alonzo Verge Jr. also contributed 15 points in 26 minutes played.

According to ESPN’s Basketball Power Index, the Hawkeyes have a 90.5% chance of winning.

Nebraska has won just one of its previous 10 contests. On Feb. 9, the last time the Cornhuskers won a game, the team defeated the Golden Gophers 78-65. Head coach Fred Hoiberg has his hands full. Following this defeat, Coach Hoiberg is still poised to lead the Husker program. They are 7-11 at home, 0-8 away and 10-8 ATS at home.

Referencing other head-to-head matchups, in the past three meetings, the Hawkeyes are 2-1 versus the Cornhuskers. Nebraska has not defeated Iowa since Jan. 7, 2020. In that game, the Cornhuskers won 76-70 on their home court.

Before wagering, it is crucial for experienced gamblers to review key betting trends.

It would not be surprising if the Hawkeyes won this game by at least 20 points. Having said that, Iowa is 1-5 ATS in its past six road matchups versus Nebraska. So, the question now is, which team will cover the spread? Iowa is entering this contest as a 12.5-point favorite over Nebraska on the road.

All things considered, picking the Hawkeyes to win and cover the spread is the best option. The total will go under 161.5. If you are new to NBA or NCAA betting, read our handicap betting guide. Other NCAA picks are on the main page.