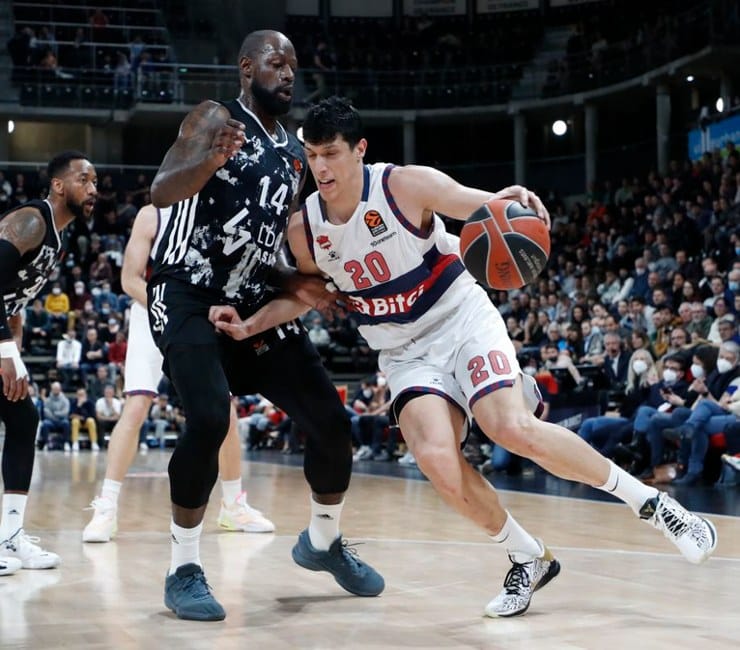 The Jazz are signing international free agent forward Simone Fontecchio to a two-year, $6.25 million deal. From 2012–2016, the 6’7″ forward played for Virtus Bologna. Seven years ago, Fontecchio declared for the 2015 NBA Draft. He attended a draft workout with the Celtics weeks before the draft. However, the forward withdrew from the draft on Jun. 15.

He was named LBA Best Player Under 22 in 2015. Fast forward to 2022, this is what ESPN’s Jonathan Givony had to say about the Italian free agent: “6’7″ and chiseled. Shot 41% for three the past two seasons. Solid passer. Competitive defender. Only 26 years old. Good rotational wing who can play 2/3/4.”

According to DraftExpress, the Italian was the best available international small forward prospect. Therefore, this is a solid signing for the Jazz. Plus, this will be the team’s first signing this offseason.

The Jazz buffed their frontcourt with Simone Fontecchio

Considering the team didn’t have any selections in last month’s draft, maybe the Gobert trade will pay off in the long run. Adding Simone Fontecchio into the mix is a minor plus. Jazz executive Danny Ainge knows those first-round draft picks will benefit his team in the upcoming future. He could even use a couple of them in a Donovan Mitchell trade package.

In the 2021-22 NBA season, the Jazz finished 49-33 (.598) and ranked fifth overall in the Western Conference. They clinched their sixth consecutive playoff appearance. Though, the Mavericks defeated them in six games during the first round of the 2022 NBA Playoffs.

Fontecchio has enough experience to benefit an NBA team

Next, while playing for Olympia Milano, he also signed with Reggio Emilia and played with them for the 2019-2020 season. In a total of 21 games played, the Italian averaged 11 points, 4 rebounds, 1.2 assists and 1 steal per game with Reggio Emilia.

Moreover, during the 2020 Tokyo Olympic Games, Fontecchio generated 19.3 points per game in four games played with Italy. He averaged 52% shooting from the field and 45% from beyond the arc. This is good news for Jazz fans.

Also, Fontecchio played for Alba Berlin, a German professional basketball club, from 2020 to 2021. Lastly, the forward signed with Club Deportivo Saski-Baskonia of the Liga ACB and the EuroLeague. Based on a minimum of 20 games played, Fontecchio averaged a career-high 12.4 points per game in the Liga ACB with Baskonia during the 2021-22 season.

Additionally, he averaged 3.9 rebounds and 1.7 assists per game. Not to mention, last season, the forward averaged a career-high 4.4 rebounds per game with Baskonia in the EuroLeague. He shot 43% from the floor and 40% from downtown as well.

In six playoff games with Baskonia, the Italian averaged 12.8 points, 2.7 rebounds and 1.3 assists per game. More news stories related to Simone Fontecchio or the Jazz are on the main page.