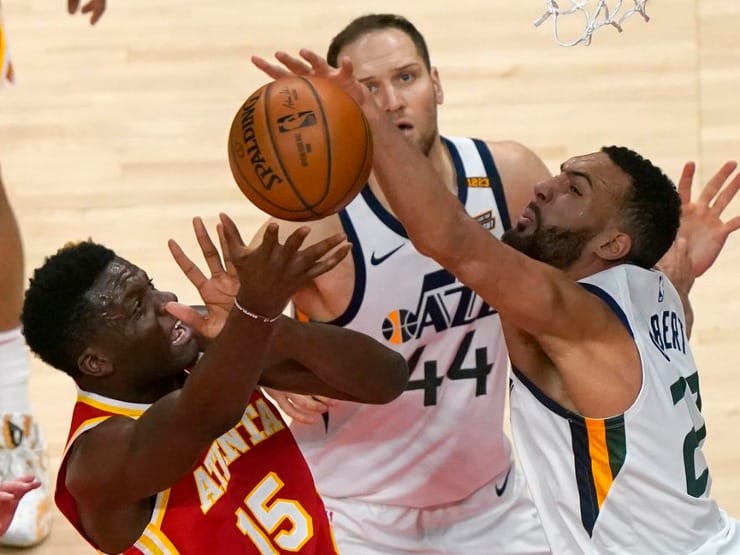 ESPN’s Basketball Power Index: Jazz have a 54.4% chance of winning

According to Land of Basketball’s database, these two teams have played one another 106 times in the regular season. The Jazz lead the series 55-51 all-time versus the Hawks. In addition to their 6-1 record in the Western Conference right now, Utah is 3-0 in the team’s past three head-to-head meetings versus Atlanta. On Feb. 4, 2021, the last time these contenders met in the regular season, the Jazz won 112-91 on the road. Over the course of the last 10 head-to-head games, Utah is 6-4 against Atlanta.

As shown below, in Utah’s win over the Kings on Tuesday, it was the first time in franchise history that two guards score at least 30 points each in the same game. Donovan Mitchell scored 36 points, while Mike Conley closed out his showing with 30 points. In other news, the Hawks assigned forward Jalen Johnson to the College Park Skyhawks, and the organization also transferred Sharife Cooper and Skylar Mays to the Skyhawks.

The Hawks today assigned forward Jalen Johnson to the College Park Skyhawks, while two-way players and guards Sharife Cooper and Skylar Mays have been transferred to the Skyhawks.

Additionally, on Tuesday, in the Jazz’s 119-113 home win over the Kings, guard Donovan Mitchell led his team in scoring, putting up 36 points in 32 minutes played. Guard Mike Conley also ended his performance with 30 points, 3.0 rebounds and 2.0 assists in 31 minutes of action. They out-rebounded Sacramento 59 to 38. The Jazz are one of the hottest teams in the league at the moment, right alongside the Heat.

Meanwhile, in the Hawks’ 117-108 loss to the Nets on Wednesday, forward De’Andre Hunter scored a team-high 26 points in 33 minutes on the court. Guard Trae Young concluded his showing with 21 points, 9.0 rebounds and 10 assists in 37 minutes played. To open the second half, they were outscored 34 to 20. However, they did out-rebound Brooklyn 52 to 42.

Furthermore, the total for Thursday night’s intraconference thriller is set at 220. Referencing the spread consensus, about 90% of gamblers are convinced that Utah will cover the spread. This could be the kiss of death for the Jazz, but they are one-point favorites. However, one point on the road is not very reassuring. Pertaining to the total consensus, 51% of bettors are predicting the total will go over 220. As of yet, the Jazz are 6-1 as selected favorites and 0-0 as underdogs, whereas the Hawks are 4-2 as favorites and 0-2 as underdogs.

For betting trends, the Jazz are 5-2 ATS in their last seven games. They are also 6-1 straight up in their past seven contests, and the total has gone under in five of Utah’s previous seven performances. To add to these betting statistics, the Jazz are 4-2 SU in their last six games played on the road. Next, the total has gone under in nine of the team’s past 11 contests versus Eastern Conference opponents.

On the flip side, the Hawks are 1-4 ATS in their previous five games. Also, the total has gone over in four of their last five performances. And, the total has gone under in eight of Atlanta’s past 11 games played as the underdog. Plus, they are 4-1 ATS in their previous five games played at State Farm Arena. In summary, think about picking the Jazz to win and they will cover the spread.

Pick the Jazz to win on the road, they will cover the spread and the total will go over 220. Utah is a one-point favorite with BetUS.