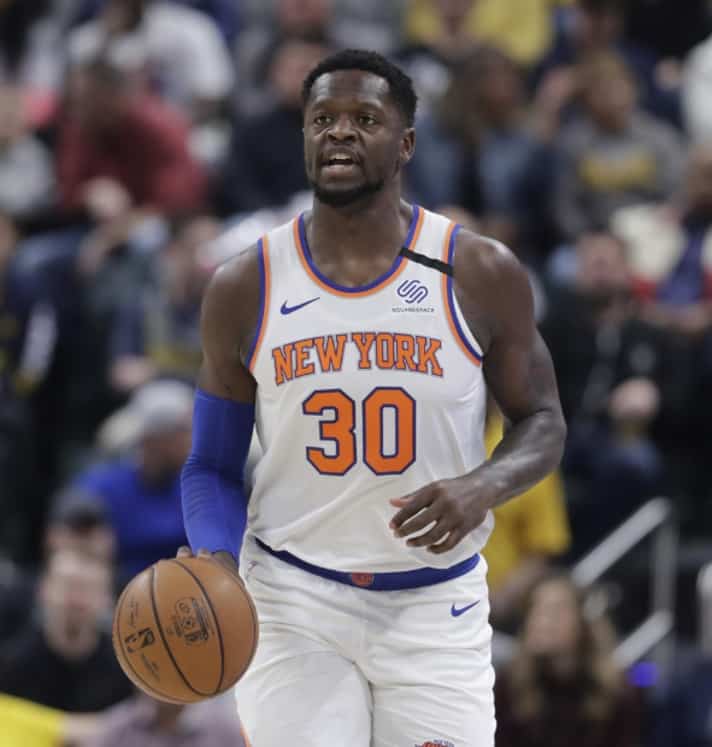 On Saturday, Oct. 9, 2021, the New York Knicks are playing the Washington Wizards at the Capital One Arena. Tonight’s exhibition matchup is the second game for both teams of the preseason. BetOnline betting odds are available down below.

Leading into Saturday night’s preseason matchup, the Knicks are 3-0 in their previous three head-to-head meetings against the Wizards. On Mar. 25, 2021, Washington defeated New York 106-102. That was the last time these two teams played one another. Anyways, the Knicks signed Tyler Hall. While playing for the Westchester Knicks of the NBA G League, Hall averaged 10.1 points, 4.1 rebounds and 2.6 assists per game last season.

Moreover, one other top story pertains to last season’s rumor, involving Knicks executive William Wesley and Wizards guard Bradley Beal. Wesley was accused of attempting to convince Beal to request a trade out of Washington. That is tampering. Though, after NBA investigators looked into this claim, they found nothing. The Knicks executive wanted to expand his playoff roster. Last season, they qualified for the postseason for the first time since 2013.

For the Knicks, Mitchell Robinson is out for tonight’s game due to a foot injury. In addition to Robinson, Nerlens Noel is listed as doubtful because of soreness in his left knee. Head coach Tom Thibodeau has to be careful. Playing starters during the preseason for a little while is ok. But, he would never want to see Evan Fournier or Julius Randle sustain a major injury during an exhibition game.

As for the Wizards, Thomas Bryant, Rui Hachimura and Cassius Winston are out against the Knicks. Bryant is still recovering from an ACL tear and Winston’s hamstrings are bothering him. Deni Avdija is listed as doubtful as well. Avdija is resting for full recovery of his right fibula.

Deni: "(The time away) gave me a lot of motivation to rehab and come back better than ever."

? Coach Unseld, Deni and @CaldwellPope spoke to the media today ahead of Saturday's #WizKnicks matchup:

While this was certainly not their best showing defensively, New York still scored 36 points in the first quarter and 34 points to open the second half. Shooting 46-for-99 from the floor, their field goal percentage was 46.5%. Plus, they won the turnover battle. In the team’s 20-point victory, they walked off the court with only three turnovers.

Furthermore, New York scored 124 points in their win over Indiana, whereas Washington put up 119 points in their loss against Houston. This is a combined total of 243 points. Therefore, bettors should lean towards picking the over for Saturday night. The Knicks-Wizards total is set at 224. It should also go without saying that Washington is an offensive juggernaut at home. Neither teams have shown stellar defense in the Eastern Conference.

For notable betting trends, the Knicks are 1-5 against the spread in their past six games played. However, the total has also gone under in five of the team’s last six games. Keep in mind, these betting trends do not include preseason games. And, they date back to last season, too.

To add to these statistics, New York is 2-10 straight up in their previous 12 games played in the month of October. Nevertheless, the total has gone over in five of the Wizards’ last six games. They are 4-1 ATS in the past five games played in October. Will Washington win and cover the spread?

Pick the Wizards to win at home; the total will go over 224. Washington is a 1.5-point favorite with BetOnline.