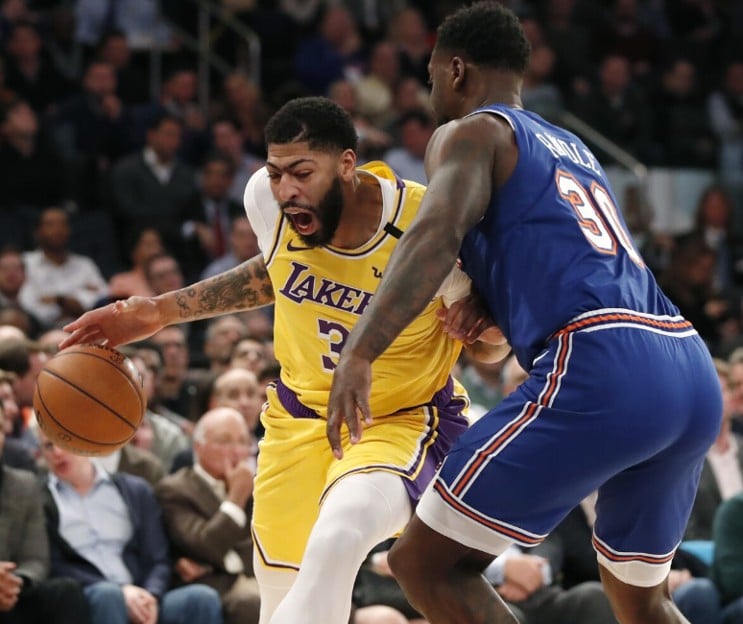 On Tuesday, Nov. 23, 2021, the Los Angeles Lakers (9-9) are playing the New York Knicks (9-8) at Madison Square Garden. Heading into this matchup, the Lakers are 6-12 against the spread in the 2021-22 NBA regular season, whereas the Knicks are 7-10 against the spread. BetUS odds are available below.

ESPN’s Basketball Power Index: Knicks have a 72.5% probability of winning

According to Land of Basketball’s database, the Lakers and Knicks have played one another in 293 regular season games all-time. Los Angeles is 170-123 versus New York. Plus, in the previous three head-to-head meetings, the Lakers are 2-1 against the Knicks. On May 11, 2021, the last time these teams met during the regular season, Los Angeles defeated New York 101-99 at Staples Center. However, in these teams’ past 10 head-to-head performances, they are 5-5 overall.

For tonight’s game, Lakers forward LeBron James will be serving his one-game suspension for striking Pistons center Isaiah Stewart in the face in the third quarter of Sunday’s matchup. Byron Spruell, the President of League Operations for the NBA, left a comment on the topic: “LeBron James has been suspended one game without pay for recklessly hitting Stewart in the face and initiating an on-court altercation.” For many fans, the length of the suspension is disputable. A few NBA analysts have mentioned that LeBron should have received a multi-game suspension.

From the NBA: “LeBron James has been suspended one game without pay for recklessly hitting Stewart in the face and initiating an on-court altercation, it was announced today by Byron Spruell, President, League Operations.”

James will serve the suspension Tuesday night (at NYK).

Not ideal with LeBron already out. https://t.co/bAvOpumIm0

Furthermore, in the Lakers’ 121-116 road win over the Pistons on Sunday, forward Anthony Davis led his team in points and rebounds, amassing 30 points and 10 rebounds in 40 minutes played. Guard Russell Westbrook closed out his showing with 26 points, 9.0 rebounds and 10 assists in 35 minutes of action. In the third quarter, forward LeBron James was ejected for elbowing Pistons center Isaiah Stewart in the face.

Plus, Stewart was also ejected for aggressively pursuing James. Afterwards, James was issued a one-game suspension, while Stewart was given a two-game disciplinary action. In this game, the Lakers shot 45-for-92 (48.9%) from the field and 10-for-31 (32.3%) from three-point range. Additionally, Los Angeles out-rebounded Detroit 51 to 39. This victory snapped their three-game losing streak. They are now 2-4 away and 2-4 ATS away.

Meanwhile, on Monday, in the Knicks’ 109-103 road loss to the Bulls, forward Julius Randle scored a team-high 34 points in 39 minutes on the court. Alec Burks ended his performance with 13 points and 3.0 rebounds in 29 minutes played, too. While New York did outscore Chicago 48 to 40 in the paint, they struggled to hit their long-range jumpers.

Moreover, the total for tonight’s interconference battle is set at 214.5. Per the spread consensus, approximately 62% of gamblers are hoping the Lakers will cover the spread at Madison Square Garden. Concerning the point total consensus, 65% of bettors are predicting the total will go under 214.5. Thus far, Los Angeles is 7-4 as a selected favorite, 2-5 as an underdog and 2-4 ATS away, whereas New York is 7-6 as a favorite, 2-2 as an underdog and 3-6 ATS at home.

As for the Knicks, they are 1-5 ATS in their last six performances this season. Also, the total has gone under in seven of the team’s previous seven games. However, the total has gone over in seven of their past 10 contests against the Lakers. Next, the team is 4-11 SU in their last 15 games against Pacific Division opponents, and they are 1-5 ATS in their previous six matches played in November. In summary, pick the Knicks to win and cover the spread at home.

Pick the Knicks to win at home, they will cover the spread and the total will go under 207. New York is a four-point favorite with BetUS.