One of the inevitable truths of the National Basketball Association is that players are paid, most often, based on promise. Back in 2009, when Boston Celtics general manager Danny Ainge decided to sign Rajon Rondo to a five-year, $55 million extension, there were a fair amount of people who thought that Rondo would never justify such a rich contract. Five years later, most would argue that they were wrong.

But for every player paid on promise who lives up to his contract like Rondo, there is an Eddy Curry, a Travis Outlaw and a Landry Fields.

As the Dallas Mavericks continue to dust themselves off from DeAndre Jordan’s decision to leave them at the alter, they will find out where JaVale McGee fits in.

On August 13, after several weeks of speculation, the Mavericks announced that they had agreed to terms with the 27-year-old, who, after seven years in the league, is more known for being an aloof sideshow than an effective professional.

Just three short years ago in 2012, the Denver Nuggets, obviously believing in McGee’s potential, signed the young center to a four-year contract worth $44 million. It took only two years for the Nuggets to divest themselves of the youngster, opting to send him to the Philadelphia 76ers in what amounted to a salary dump. The Nuggets were so desperate to get out from under McGee’s deal that they sent the Sixers a protected 2015 first-round draft pick as a part of the deal. 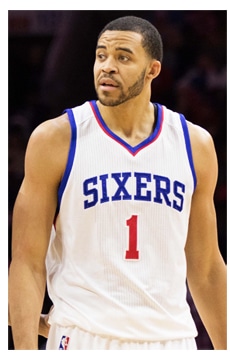 Although the Sixers did not end up exercising the pick, a franchise parting ways with such a valuable asset just to rid itself of a contract handed out just two years prior is the epitome of admitting defeat in the NBA. And with McGee, the Nuggets did exactly that.

McGee would appear in just six games for the Sixers before being waived on March 1.

Now, in Dallas, McGee and Deron Williams team up to form an interesting duo. A “has been” (Williams) and a “never was” (McGee) will join Dirk Nowitzki and Rick Carlisle—the lone remnants of the 2011 NBA championship squad. And together, the point guard and center will attempt to rejuvenate their respective careers.

One could question whether it is fair to even categorize the two together. Williams, for the most part, is a player who has already proven himself to have superstar potential. If he were to be given the benefit of the doubt, the narrative on his career could just as easily be one of a player whose body betrayed him and one whose demeanor and mentality suffered as a result of being thrust under a spotlight for which he was not prepared.

McGee, on the other hand, is a player who has never made a positive impact, never excelled and never won (at least, not in any significant way). The most productive McGee has ever been in the NBA is when he spent a few seasons posting empty stats on horrendous Washington Wizards teams.

The gross majority of time, a player reveals who he is within his first few years in the NBA. From the beginning, there should be sporadic flashes of brilliance. In a player’s second year, consistency becomes the goal. By the third year, for the most part, we know who a player is.

Common-held beliefs and rules are generally applicable, but, as always, there are exceptions; Jermaine O’Neal may be the gold standard. O’Neal spent the first four years of his career as a member of the Portland Trail Blazers, a deep team that featured the likes of Stacey Augmon, Rasheed Wallace, Chris Dudley, Arvydas Sabonis and Brian Grant taking repetitions and opportunities away from the phenom. O’Neal would be traded after four years in Portland and would not blossom into a stud until his sixth year in the NBA.

As the leader of the Indiana Pacers, O’Neal eventually emerged as a legitimate MVP candidate and the best player on a team that was talented enough to win an NBA championship. The team was undone by Ron Artest and the Malice at the Palace, but the fact is that the idea that O’Neal would ever be a principal player on a championship contender was absurd while he was sitting on the bench in Portland from 1996 to 2000, just as it is absurd to now think that, after seven years of futility, McGee can rise up to become an important player for one of the league’s most successful franchises over the past 15 years.

But O’Neal and his experience breed hope for all “late bloomers” in the NBA. And at this point, McGee hopes to prove that he is of the same creed.

What is most impressive about the 27-year-old is the athleticism and agility that he possesses in his impressive, seven-foot frame. The timing, explosiveness and defensive instincts that McGee has are cut from the same mold as Tyson Chandler and DeAndre Jordan. What he has sorely lacked thus far is Chandler’s intelligence and basketball I.Q. And to this point, his track record and reputation among those that have known or played with him suggests that his work ethic is nowhere in the same class as that of Jordan (despite his poor free throw shooting, Jordan is praised by everyone around him as someone who works to maximize his full potential).

If one were to search hard enough, they could easily find a plethora of McGee highlights. Based on them, it would not be difficult to understand why the Nuggets would commit $44 million to his potential. And even though that experiment proved to be a failure, the Mavericks taking a flier on McGee to what amounts to a two-year, minimum salaried deal—like the $5 million commitment the franchise made to Williams—is an absolute no-brainer.

Indeed, in the NBA, youngsters are paid based on promise. And despite his advancing age and overall dearth of accomplishments, at 27 years old, promise is one thing that Mark Cuban obviously believes McGee still has.

So McGee and the Mavericks stand together, both attempting to recover from a recent past that has been forgettable and hoping for a better tomorrow.

Still, despite all of the questions, it is easy to see why Cuban believed McGee could be an answer.