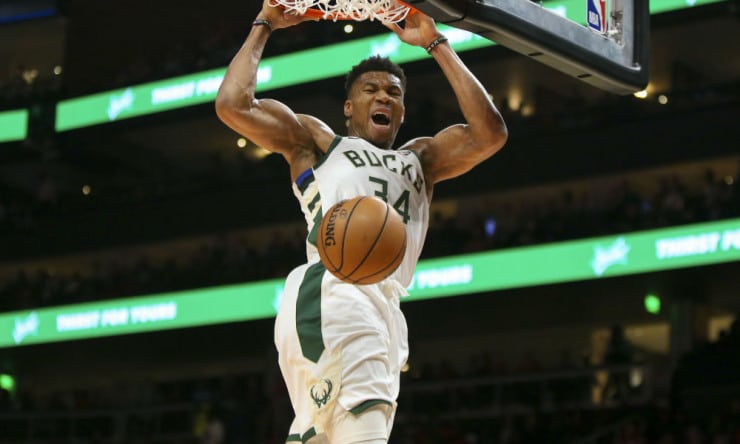 Game 5 of the 2021 NBA Finals is Saturday, July 17th at 9:00 p.m. (ET). The game will air live on ABC and ESPN Deportes from the Phoenix Suns Arena. The total consensus is currently set at 220.5. Notwithstanding the total going under in yesterday’s game, the spread consensus is favoring the Suns for Game 5 on Saturday, and the total is expected to go over. They are now 9-1 at home so far this postseason.

The Milwaukee Bucks shot only 32 percent from the field in the first quarter of last night’s game, but in hindsight, the Suns’ seven turnovers in the first half demonstrated more costly mistakes than missed baskets for the visiting team. On the other hand, Phoenix fell to 3-1 on the road in Game 4 meetings throughout this season’s playoffs.

This was the first time the Suns lost back-to-back games this postseason. Similar to Milwaukee, the Suns are more energetic and aggressive on their home court. For something else to think about, the Suns are also 35-11 at home this season.

After Game 4, the Suns now have -145 odds to win their first NBA title in franchise history. They open Game 5 as 4-point favorites over the Bucks. The Suns’ opening odds in the series were -170. As for Milwaukee, their odds are +125 to win their first championship since the 1970-71 NBA season. The Bucks’ opening odds in this series were +150. The Suns are 55-35-2 ATS, while the Bucks are 44-49 ATS. For Saturday night’s Game 5, Milwaukee is expected to win, cover the spread, and the total is projected to go over 218.

In Game 4, the Bucks evened the series at two games a piece after their 109-103 victory over the Suns. Shooting guard Devin Booker is leading Phoenix in postseason points, averaging 26.3 points per game. In 38 minutes played, he scored 42 points. After Game 4’s performance, Booker joined Stephen Curry and Allen Iverson on the list for the most points scored (38) through three quarters in the last 25 NBA Finals. The 24-year-old first-round pick scored more points in the first half of Game 4 (20) than he did in the entirety of Game 3 (10).

Per ESPN, Milwaukee had a 59 percent BPI chance to win Game 4 at home. It was not one of those games to take mindless, unnecessary risks. Moreover, Booker made history when he broke a 54-year-old record by scoring more points (532) in his first NBA Playoffs than Rick Barry (521) and Julius Erving (518). However, he also played in five more playoff games than Barry and one more than Erving.

According to Bovada, the Bucks were favored to win Game 3, with reliable odds showcasing -4.5 (-115). The Game 4 total was set at 221. Milwaukee was expected to win, cover the spread, and the total was projected to go under 221. On the bright side for many gamblers, the total did go under this time around. In the first three games of this NBA Finals series, the total had gone over. Upon further review of analyzing records and other notable facts, once again leading his team in multiple statistics, Giannis Antetokounmpo is averaging 29.2 points per game and 12.9 total rebounds. Not to mention, leading into Game 4, Antetokounmpo became the third player with consecutive 40-point double-doubles in the NBA Finals, joining LeBron James and Shaquille O’Neal. The Greek Freak has averaged 31.8 points, 13.5 rebounds, and five assists at the Fiserv Forum this postseason. He is the first player with more points than minutes played in consecutive games as well.

Plus, Jrue Holiday has a team-high of 8.4 assists per game in this postseason. Referencing Caesars Sportsbook, Giannis’ projected Over/Under was set at 34.5 in Game 4, whereas Booker’s O/U was set at 27.5. Based on the betting calculations from Odds Shark and BetUS, relating to the Greek Freak’s point total, it was recommended for sports bettors to stick with the under. Needless to say, it was the fairest bet. Devin Booker was expected to earn more than 28 points in yesterday’s game, but one of the biggest surprises was Chris Paul’s overall performance. Since 2012, Paul’s 15 turnovers over the previous three games in the NBA Finals are the most over the course of three games in the playoffs. In 37 minutes played, he finished his night with 10 points, four rebounds, and seven assists. Some gamblers were expecting a big showing in Game 4.

To add to that point, the Suns’ Deandre Ayton committed five fouls in a playoff-low of 24 minutes in Game 3. He concluded last night’s performance with 6 points, 17 rebounds, and five assists. At least he stayed out of foul trouble this time. Additionally, Khris Middleton scored a playoff career-high of 40 points in 43 minutes. When Milwaukee is firing on all cylinders, the average basketball enthusiast can see that Middleton is the difference maker when he comes ready to play. Middleton and Antetokounmpo combined for 66 points in Wednesday night’s game. This was the perfect game for bettors to have placed player prop bets for specific Bucks’ players.

Leading into Game 5 of the 2021 NBA Finals, the spread for the Phoenix Suns remains at -4 (-109). The best moneyline for the Suns is currently set at -164. The total for the Suns is projected to go under 218.5 (-109). They are also 10-3 SU in their last thirteen games played against Central division opponents. In addition to the aforementioned betting odds for Phoenix, the Bucks have opening odds showcasing +4.5 (-110).

Their moneyline is also listed at +155. According to PointsBet, their total is expected to go over 218 (-115). It should go without saying at this point that high-scoring offenses heavily favor the over bet. Though, Game 4 in this series was an exception. The total has gone over in eight of Milwaukee’s last ten games against an opponent in the Western Conference.

The betting trends listed above are the notable statistics, leading into Game 5 of the NBA Finals. Booker and Antetokounmpo are meeting expectations in this series. They are providing a significant, memorable effort to help bettors with their prop bets. Having said that, the same positive effort cannot be said about Chris Paul, especially if bettors were expecting an above average performance in Games 3 and 4. His turnovers are costing the Suns more than they could afford to lose. The five-time All-NBA Second Team is averaging 8.7 assists and 1.3 steals per game, though.

Considering this 10-point showing from Paul in this six-point loss could be an anomaly, moving forward in this series, Phoenix having home-court advantage from here on out could lead to a more desirable experience for Suns’ fans and sports bettors interested in placing future player prop bets in this series. Thus far, this NBA Finals has been an unusual and sporadically interesting series for the bookmakers. For those of you who are interested in placing quick bets, there are several modern apps available as of July 2021, such as for Bovada, BetUS, Intertops, MyBookie, and BetOnline.