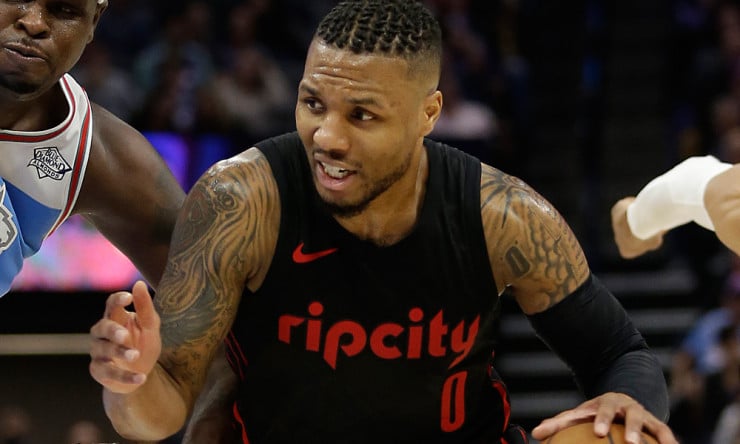 Monday’s NBA schedule is loaded with intriguing matchups from top to bottom, including an explosive Northwest division showdown between the Denver Nuggets and the Portland Trailblazers.

The 2022-23 NBA season is in full blast with eight games on a Monday night schedule. Again, this slate offers intriguing face-offs of superstars and emerging superpowers in both Eastern and Western conferences. After coming off a 49-point explosion, Ja Morant gets another chance to go head-to-head with two of the purest scorers in the game: Kevin Durant and Kyrie Irving of the Brooklyn Nets. The Utah Jazz will try to sustain their surprising immaculate run as they test the Houston Rockets. To cap off a hectic schedule, the Portland Trail Blazers gun for a 4-0 record against Nikola Jokic and the Denver Nuggets.

Fresh off a 124-115 win over the Detroit Pistons, the young and hungry Indiana Pacers will go for a back-to-back win against the slumping Philadelphia 76ers. Despite terrific statistical output from James Harden, the Sixers found themselves without a win in three games. Joel Embiid’s just-revealed foot injury might have something to do with their recent woes, but their inability to finish strong late emerges as the biggest problem for the team.

Against the Pacers, the Sixers will have the opportunity to polish the execution of their plays and finally put their first win on the board. Watch out for another monster stats night from James Harden who is tearing defenses apart over the last three games. The Beard is averaging 26.0 PPG, 8.3 RPG, and 9.3 APG in three games.

For the second time in three nights, the Toronto Raptors will lock horns with the Miami Heat at FTX Arena. The Heat gutted out a tough 112-109 victory in their first outing with the Raptors to record their first victory of the season. Jimmy Butler led the charge for the Heat with 24 points on 7-for-16 shooting and 9-for-11 from the charity stripe.

The Heat should expect a more physical ballgame from the Raptors, who will surely look to level their regular season series at 1-1. Pascal Siakam poured in 23 points in the first game and is expected to carry the offensive load once again alongside Fred VanVleet and Scotty Barnes. With that said, The Raptors are poised to get the W on this one behind a more focused effort on defense.

Back Raptors @ +235 with BetOnline

The Orlando Magic are still winless after three games, while the New York Knicks are hunting for their second win of the season after blowing out the Pistons, 130-106, in their last game.

The Magic have faired well against the Knicks over their last 10 head-to-head games with a 5-5 win-loss card. However, New York’s latest victory against the Pistons suggests things now start clicking for the Knicks’ main guns. The lefty trio of Julie Randle, RJ Barret and Jalen Brunson combined for 50 points that night, establishing themselves as the team’s Big 3 for this season. This same triumvirate is going to be the reason why the Knicks are the ideal pick to win against an uber-talented but still inexperienced Magic squad.

Without a hint of surprise, the Boston Celtics enter their first showdown with Chicago Bulls this season as the overwhelming 6-point favorite. And why not? Everything is working well for the Celtics so far. Jayson Tatum and Jaylen Brown have been unstoppable for opposing teams, and Boston is shooting a staggering 54 percent from the field.

Expect Boston to go off right out of the gates. They have been shooting extremely well in their past three games and I don’t see them slacking off against a Bulls team that is allowing opponents to shoot 48 percent from the floor and 40 percent beyond the rainbow territory.

The Jazz are off to a shocking start as the supposedly rebuilding squad brought down three strong Western Conference teams tipped to figure in the playoff race throughout the rest of the season. Utah shot the lights out averaging 127.5 PPG en route to victories against the Denver Nuggets (123-102), Minnesota Timberwolves (132-126) and New Orleans Pelicans (122-121).

Utah will play the Rockets as the slight -1.5 point spread favorite, which should open an opportunity to capitalize on. The Jazz have been red-hot offensively and I don’t see Houston’s defense containing this shooting barrage, especially for a team that is allowing 123.6 points per contest.

For the first time this season, Ja Morant will test his scoring prowess against the duo of Kyrie Irving and Kevin Durant. The Grizz superstar is averaging 34.3 PPG on an efficient 54.8 FG shooting. Durant is not far behind though with 29.5 PPG on a 48.7 FG clip.

Setting aside all the hoopla surrounding these superstars, the Grizzlies might have a slight advantage over the Nets in this duel. Bookmakers pegged Memphis as the 1.5-point favorites over Brooklyn mainly due to their superior 7-3 head-to-head record in their last 10 meetings. Most of all, Memphis boasts the personnel to at least hold Durant below his scoring average with their lanky wingmen and versatile bigs.

Back Grizzlies @ -115 with BetOnline

The Spurs, a team projected to tank the rest of the season for a shot at Victor Wembenyama in next year’s draft, had just scored back-to-back wins against the Pacers and the Sixers. Sure, it gives the fanbase something to cheer about early this season, but bookmakers aren’t buying the Spurs’ early success.

San Antonio checks in as a 9-point underdog to the Minnesota Timberwolves, who had a pair of victory against the Oklahoma City Thunder. Will the Spurs pull off another upset victory? Unfortunately, their streak will end in Twin City with Rudy Gobert and Karl-Anthony Towns expected to impose their will in the paint.

For the last and the most intriguing matchup of the evening, the Denver Nuggets will square off against the undefeated Portland Trail Blazers. The Nuggets came off an impressive win over the Golden State Warriors 128-123 and the Oklahoma City Thunder 122-117 after dropping their season-opener to the Jazz 102-123. The Blazers, meanwhile, swept all their Pacific Division opponents on their way to a 3-0 start.

Despite the Blazers scoring hot start, sports betting sites are picking the Nuggets to win at -5. Denver holds a 7-3 head-to-head slate against the Blazers in their last 10 games, and 2-1 in their last three. Still, it’s hard to count out Portland with Damian Lillard showing no effect of last season’s injury and Anfernee Simmons coming on his own as the second gunner.

Back Blazers @+165 with BetOnline
Join our Telegram channel for our exclusive free betting tips, picks and offers.