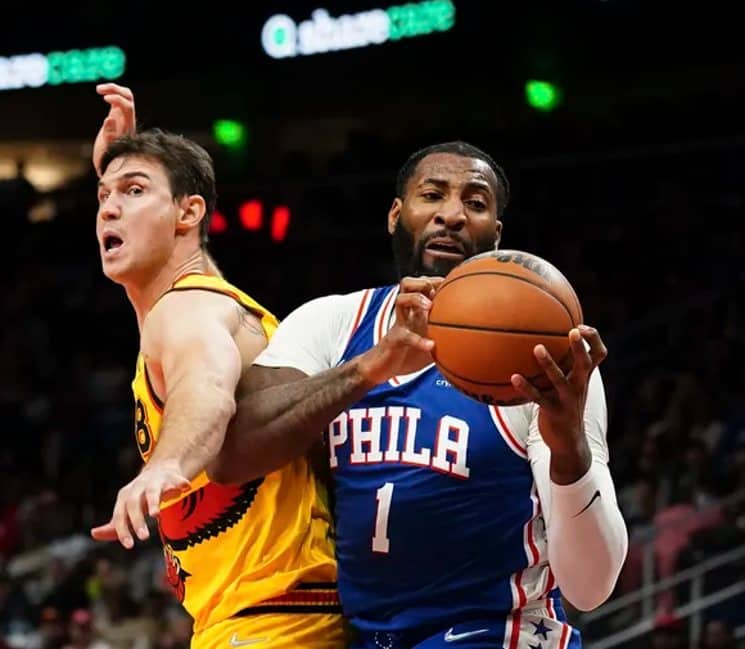 In tonight’s intraconference rematch, the Atlanta Hawks (14-16) are facing off versus the Philadelphia 76ers (16-15) at Wells Fargo Center. Will Trae Young and the COVID-19-stricken Hawks win their first contest against the Sixers since Jan. 11, 2021?

Heading into Thursday night’s Eastern Conference battle, the Hawks are 12-18 against the spread in the 2021-22 NBA regular season, while the 76ers are 14-17 against the spread. The start time for this matchup is 7 p.m. ET. The contest can be watched live via Bally Sports Southeast, NBA League Pass and NBC Sports Philadelphia. Referencing Land of Basketball’s historical database, based on 389 head-to-head regular season games played all-time, Philadelphia is 198-191 versus Atlanta. Additionally, in the previous four meetings, the Sixers are a flawless 4-0 against them.

The 76ers have won the last two head-to-head games this season versus the Hawks. On Dec. 3, Philadelphia defeated them 98-96 at State Farm Arena. On another topic, after Atlanta’s 104-98 loss to Orlando, Hawks forward John Collins closed out his third consecutive performance with at least 20 points scored and 10 rebounds collected. This is Collins’ third-longest streak of his professional career. His double-figure scoring streak was also extended to 18 games. The fifth-year player is averaging 17.6 points, 8.0 rebounds and 2.1 assists per game.

John Collins has recorded his third consecutive game of 20-or-more points and 10-or-more rebounds, the third longest 20/10 streak of his career.

Anyways, in the Hawks’ 104-98 upset home loss versus the Magic, forward Cam Reddish scored a team-high 34 points in 42 minutes of action. Forward John Collins earned another career double-double as well, amassing 28 points, 12.0 rebounds and 2.0 assists in 41 minutes played. In the second quarter, the Hawks outscored them 25 to 17. In addition to Orlando accumulating 46 points in the free throw lane, Atlanta committed 14 turnovers.

Despite the Hawks out-rebounding them 49 to 40, they were certainly missing Trae Young. As soon as Young was listed on the injury report, some bettors out there changed their picks. Atlanta shot 32-for-80 (40%) from the floor and 12-for-31 (38.7%) from three-point range. The team is now 8-8 at home, 6-8 away and 5-9 ATS on the road this season. They rank 11th overall in the Eastern Conference.

Regarding ESPN’s Basketball Power Index, the 76ers have a 69.9% probability of winning.

As for the 76ers, on Monday, in their 108-103 road win over the Celtics, center Joel Embiid added one more double-double to his career total, finishing his effort with 41 points, 10 rebounds and 5.0 assists in 40 minutes played. Guard Seth Curry also contributed 26 points, 4.0 rebounds and 7.0 assists in 40 minutes spent on the court. While the C’s outscored them 31 to 24 to open the second half, Boston allowed 33 points in the fourth quarter.

The Sixers were more accurate with their shot attempts — whether at the free throw line or up close in the key. Philadelphia shot 36-for-72 (50%) from the field and 10-for-25 (40%) from behind the arc. Boston generated a total of 46 points in the paint, but Philadelphia kept nailing their long-range jumpers. Following this road victory, the 76ers are 10-8 away, 6-7 at home and 4-9 ATS at home this season. They rank seventh in the conference.

Pick the 76ers to win, the Hawks will cover the spread and the total will go under 209.5. Philadelphia is a 10.5-point favorite at home with BetOnline.