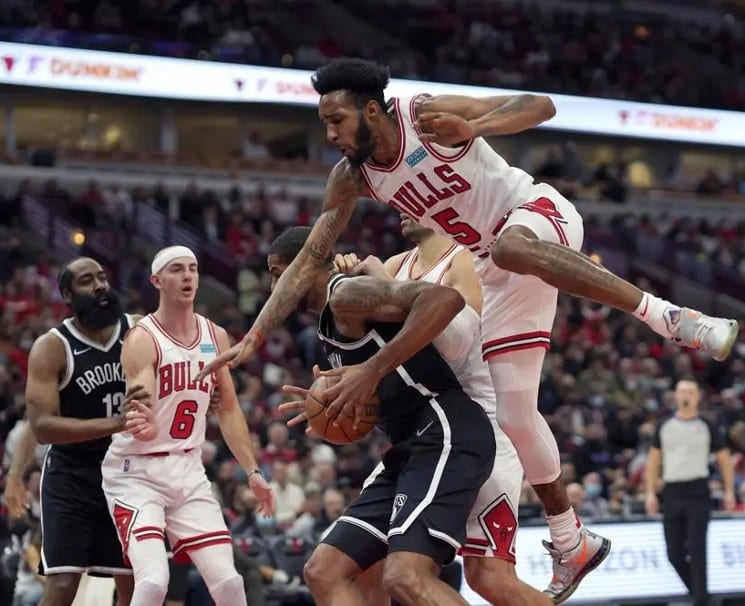 For Saturday night’s intraconference thriller, the Chicago Bulls (15-8) are aiming to add to their two-game winning streak versus the Brooklyn Nets (16-6). Can Kevin Durant and the Nets earn their first head-to-head win this season against the Bulls?

Leading into tonight’s Eastern Conference matchup, the Bulls are 15-8 against the spread in the 2021-22 NBA season, while the Nets are 8-13-1 against the spread. This game will air live at 8 p.m. ET via NBA League Pass, NBC Sports Chicago and YES Network. According to Land of Basketball’s database, these two contenders have met 177 times in the regular season all-time. Chicago is 92-82 versus Brooklyn. On Nov. 8, 2021, the first meeting this season, the Bulls won 118-95.

After the Nets defeated the Timberwolves 110-105 on Friday, point guard James Harden did not have much to say about his team’s hard-fought win. He was likely thinking about the Bulls minutes after yesterday’s game came to a close. In a post-game interview, Harden said, “The Bulls are going to be a big test for us.” He’s not wrong. Chicago ranks second in the Eastern Conference, with a 15-8 record and trailing Brooklyn by 1.5 games. The thirteen-year NBA veteran is averaging 20.9 points, 7.9 rebounds and 9.3 assists this season.

James Harden said there's not much to take from this sloppy, frenetic game. Adds tomorrow vs. the #Bulls is "going to be a big test for us." #Nets

Furthermore, in the Bulls’ 119-115 road loss versus the Knicks on Thursday, forward DeMar DeRozan scored a team-high 34 points in 38 minutes on the court. Nikola Vucevic and Zach LaVine both ended their performances with 27 points as well. In their loss to New York, the team was outscored 66 to 42 in the paint. They also surrendered 64 second-half points.

In addition to Chicago’s slow start in the opening quarter, they shot 44-for-89 (49.4%) from the floor and 11-for-29 (37.9%) from behind the arc. The Bulls have now lost four out of their past 10 games this season. It should go without saying that this team is exceeding expectations. They are 7-4 at home, 8-4 away and 8-4 ATS on the road. For a reminder, Chicago is 1-2 against Brooklyn in the team’s last three head-to-head contests.

As for the Nets, in their 110-105 home-court victory over the Timberwolves on Friday, forward Kevin Durant concluded his showing with one more double-double, earning 30 points, 10 rebounds and 6.0 assists in 38 minutes played. Guard Patty Mills had 23 points in 34 minutes of action, too. The Nets controlled the paint by a couple of baskets, outscoring the Timberwolves 50 to 44 in the free throw lane.

For key betting trends, the Bulls are 5-2 ATS in their last seven road performances. To add to that, the total has gone over in four of their past five games. Chicago is 3-11 straight up in the team’s previous 14 matches versus Brooklyn. Next, they are 1-7 SU in their last eight road games at Barclays Center, and the total has gone under in 11 of their past 15 contests against Atlantic Division opponents.

Pick the Nets to win, they will cover the spread and the total will go over 222. Brooklyn is a three-point favorite with BetUS.