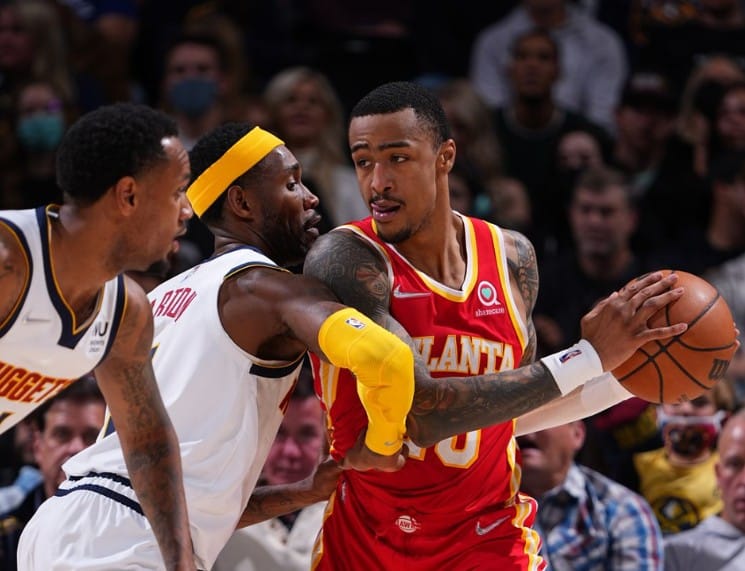 In Friday night’s interconference matchup, the Denver Nuggets (14-14) are playing the Atlanta Hawks (14-14) at State Farm Arena. Will Trae Young and the Hawks win their first game versus the Nuggets since Feb. 21, 2021?

Leading into tonight’s intriguing clash, the Nuggets and Hawks are 12-16 against the spread in the 2021-22 NBA season. This contest will start at 7:30 p.m. ET.  Not to mention, the game will air live through Altitude, Bally Sports Southeast and NBA League Pass. Referencing Land of Basketball’s database, these two contenders have played one another 94 times in the regular season all-time. Atlanta is 51-43 versus Denver. Plus, in the previous three meetings, the Nuggets are 2-1 against the Hawks.

On Nov. 12, 2021, the first meeting of this regular season, Denver won 105-96 at home. On another subject, in the never-ending era of COVID-19, be sure to skim through the injury reports for each individual game. Star players can test positive within hours of tip off. For example, the Hawks will be without Bogdan Bogdanovic, Solomon Hill and De’Andre Hunter for tonight’s home game versus the Nuggets. While none of these players are in the NBA’s health and safety protocols, Denver’s Bol Bol was added to the list a couple of minutes ago.

An @emoryhealthcare injury report for tonight’s game vs. Denver:

Bogdan Bogdanovic: Out
Solomon Hill: Out
De’Andre Hunter: Out pic.twitter.com/OOm2s4Mb9Z

Bol was in the health and safety protocol earlier this month at the start of their two-week road trip.

He’s played 3:41 seconds in December, which all came in Wednesday’s loss to Minnesota. https://t.co/yORbOJeS1T

Additionally, on Wednesday, in the Nuggets’ 124-107 home loss versus the Timberwolves, center Nikola Jokic earned another career triple-double, amassing 27 points, 10 rebounds and 11 assists in 35 minutes on the court. Markus Howard had 14 points, 2.0 rebounds and 1.0 assist in 17 minutes played. In their 17-point defeat, they allowed a whopping 75 first-half points.

On top of Denver surrendering 33 points in the third quarter, the team allowed 23 three-pointers. Despite outscoring Minnesota 48 to 30 in the paint, their defensive effort was atrocious. Following this loss, the Nuggets are now 8-5 at home, 6-9 away and 6-9 ATS on the road this season. The team ranks eighth in the Western Conference, trailing the top-ranked Warriors by nine games.

Referring to ESPN’s Basketball Power Index, the Hawks have a 50.5% chance of winning. Choose carefully!

Meanwhile, in the Hawks’ 111-99 away win over the Magic, guard Trae Young once again scored a team-high 28 points in 30 minutes played. Forward John Collins finished his effort with one more career double-double, accumulating 21 points, 10 rebounds and 2.0 assists in 36 minutes of action. In the second quarter, Atlanta outscored Orlando 37 to 25.

While the Hawks were out-rebounded 46 to 40, the team scored 48 points in the free throw lane. They allowed several garbage-time baskets, but Atlanta maintained a double-digit lead to close out their performance with the dub. The Hawks have won five of their past 10 games. After this road win, they are now 6-8 away, 8-6 at home and 7-7 ATS at home this season.

Interested in learning more about betting in Georgia? Read our Georgia sports betting guide to learn all you need to know about the legal state of betting in GA.

On the other side, the Hawks are 2-4 ATS in their previous six performances. Also, the total has gone over in four of their last five games versus the Nuggets. And, Atlanta is 0-6 ATS in the team’s past six contests at State Farm Arena. Next, the Hawks are 1-6 SU in their previous seven games played on a Friday. In conclusion, the Nuggets will keep bettors on the edge of their seats, but the Hawks might win. If you need wagering assistance, review our handicap betting guide.

Pick the Hawks to win, the Nuggets will cover the spread and the total will go over 215. Atlanta is a 3.5-point favorite at home with BetUS.