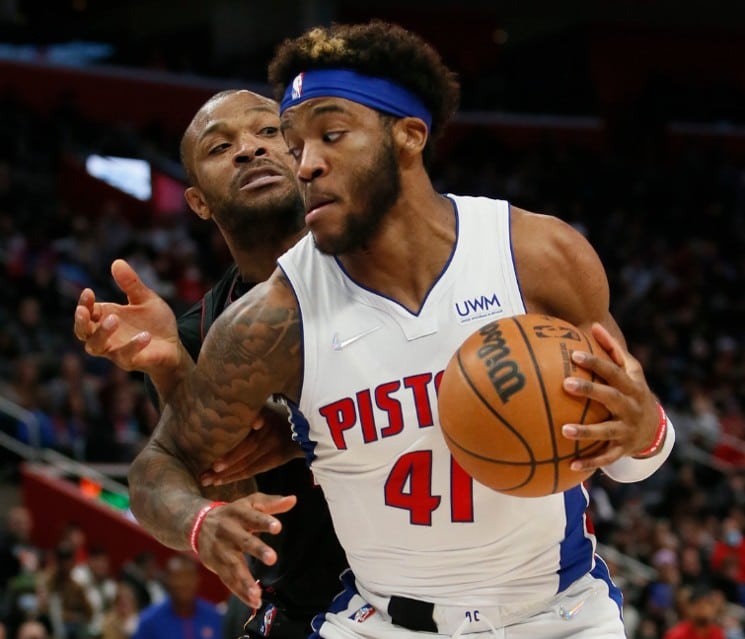 In Thursday night’s Eastern Conference mismatch, the Detroit Pistons (5-25) are playing the Miami Heat (19-13) at FTX Arena. Will Saddiq Bey and the unpredictable Pistons upset the inconsistent Heat?

Leading into Wednesday night’s Eastern Conference rematch, the Pistons are 14-16 against the spread in the 2021-22 NBA regular season, whereas the Heat are 19-13 against the spread. The tip-off time for this contest is 7:30 p.m. ET. The game can be watched live through Bally Sports Detroit, Bally Sports Indiana, Bally Sports Sun and NBA League Pass. According to Land of Basketball’s database, these two contending teams have played one another 119 times in the regular season all-time. Plus, in the past three meetings, the Heat are 2-1 against them.

Though, Detroit defeated Miami 100-90 at Little Caesars Arena on Dec. 19. Switching gears, the Pistons lost 105-91 to the Knicks on Tuesday night. But, the loss was not the worst part. Knicks center Nerlens Noel entered the league’s health and safety protocols on Wednesday morning. In other words, there’s a good chance at least one Pistons player will be added to the COVID-19 protocols list by game time. Be sure to pay attention to any injury report updates before tip off. And, for a quick update, Cade Cunningham is officially out.

Additionally, on Tuesday, in the Pistons’ 105-91 road loss versus the Knicks, Saben Lee led his team in scoring, contributing 16 points in 25 minutes played. Cory Joseph and Saddiq Bey each scored 15 points as well. Nonetheless, this was an overall lackluster effort offensively. The Knicks held the Pistons to under 20 points in the first quarter.

Besides rebounds and points scored in the free throw lane, Detroit failed to generate an offense throughout the course of this game. They shot 34-for-94 (36.2%) from the field and 8-for-33 (24.2%) from behind the arc. Covering the spread has been the story for the Pistons this season, but the team is coming up short more often than not. Now, Detroit is 2-13 away, 3-12 at home and 7-8 ATS on the road. Needless to say, the team ranks dead last in the Eastern Conference.

Per ESPN’s Basketball Power Index, the Heat have a 86.3% chance of winning.

Meanwhile, in the Heat’s 125-96 blowout home win over the Pacers on Tuesday, Tyler Herro and Duncan Robinson each put up 26 points in their performances. Forward Max Strus amassed 18 points, 7.0 rebounds and 4.0 assists in 36 minutes, too. In the first half, Miami scored a grand total of 68 points against Indiana.

For useful betting trends, the Pistons are 2-4 ATS in their last six performances. They are also 1-15 straight up in their past 16 games. Next, Detroit is 0-8 SU in the team’s previous eight road contests this season. And, the Pistons are 4-1 ATS in their last five matches versus Southeast Division opponents. Finally, the total has gone over in four of Detroit’s past five games against Miami at FTX Arena.

On the other side, the Heat are 5-2 ATS in their previous seven performances. Also, the total has gone over in 12 of their last 18 contests versus the Pistons. To add to these betting statistics, Miami is 5-2 SU in the team’s past seven games played in December. And, the total has gone over in seven of the Heat’s previous 10 contests played on a Thursday. Ultimately, pick the Heat to win and cover the spread. Before you place a wager, read our handicap betting guide.

Pick the Heat to win, they will cover the spread and the total will go over 202.5. Miami is a 10-point favorite at home with BetOnline.