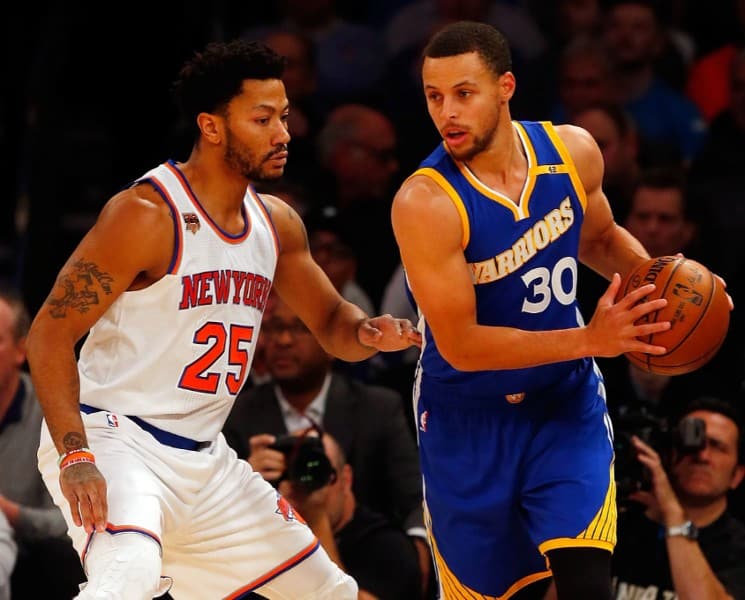 In tonight’s interconference mismatch, the Golden State Warriors (22-5) are playing the New York Knicks (12-15) at Madison Square Garden. Will Derrick Rose and the Knicks end their three-game losing streak?

Heading into Tuesday night’s contest, the Warriors are 17-9-1 against the spread in the 2021-22 NBA season, whereas the Knicks are 11-16 against the spread. This potential record-breaking thriller will air live at 7:30 p.m. ET via NBA League Pass NBC Sports Bay Area and TNT. According to Land of Basketball’s database, these two competitors have played one another 344 times during the regular season all-time. Golden State is 182-162 versus New York. However, in the past three head-to-head meetings, the Knicks are 2-1 against them.

On Feb. 23, 2021, the last time these teams met during the regular season, Golden State won 114-106. Anyways, the top story for tonight’s game is the high probability of Warriors guard Stephen Curry breaking Ray Allen’s career record for made threes. Curry needs two 3-pointers to break that record. Over the course of 788 career games, the two-time MVP has averaged 43.1% from behind the arc. The seventh overall pick of the 2009 NBA Draft is averaging 27 points, 5.6 rebounds and 6.3 assists this season.

Can confirm that the Warriors' flight just took off from Indy. They won't get to their hotel in Manhattan until close to 2 p.m. Tipoff against the Knicks is at 7:30. As is well known at this point, Steph Curry needs just 2 3-pointers to pass Ray Allen for the NBA career record.

Quentin Grimes (health and safety protocols) is out for tonight’s game against Golden State.

Furthermore, on Monday, in the Warriors’ 102-100 road win over the Pacers, guard Stephen Curry scored a team-high 26 points in 35 minutes of action. Forwards Andrew Wiggins and Draymond Green each ended their performances with 15 points. Green also contributed 9.0 rebounds and 5.0 assists in 31 minutes played. To open the second half, the Warriors outscored the Pacers 33 to 29.

Per ESPN’s Basketball Power Index, the Warriors have a 72.7% chance of winning.

As for the Knicks, in their 112-97 home loss versus the Bucks, forward Quentin Grimes led his team in scoring, putting up 27 points in 39 minutes spent on the court. Both Derrick Rose and Kevin Knox closed out their night with 18 points. Throughout the course of this matchup, these teams had high-scoring and low-scoring performances. In the second quarter, Milwaukee outscored New York 35 to 32.

It should go without saying that Milwaukee also scored 46 points in the free throw lane. The Knicks shot 35-for-82 (42.7%) from the floor and 17-for-49 (34.7%) from three-point range. While these contenders finished with a similar field goal shooting percentage, rebounds were the difference-maker in this close contest. New York is now 5-9 at home, 7-6 away and 4-10 ATS at home this season, and they are on a three-game skid.

For interesting betting trends, the Warriors are 1-4 ATS in their past five performances this season. Plus, the team is 16-4 straight up in their previous 20 games played. Next, Golden State is 11-2 SU in the team’s last 13 matches versus New York, and the Warriors are 7-1 SU in their past seven matches against Eastern Conference opponents. Lastly, the total has gone under in nine of their previous 10 road games.

On the other side, the Knicks are 1-5 ATS in their previous six performances. Next, the total has gone over in five of their last seven games. And, New York is 1-4 ATS in the team’s past five contests. To add to these betting statistics, the total has gone under in nine of their previous 13 games played on a Tuesday. Taking everything into account, think about picking the Warriors to win and cover the spread. If you wager daily, read through our handicap betting guide here at Basketball Insiders.

Pick the Warriors to win, they will cover the spread and the total will go over 211. Golden State is a five-point favorite on the road with BetUS.