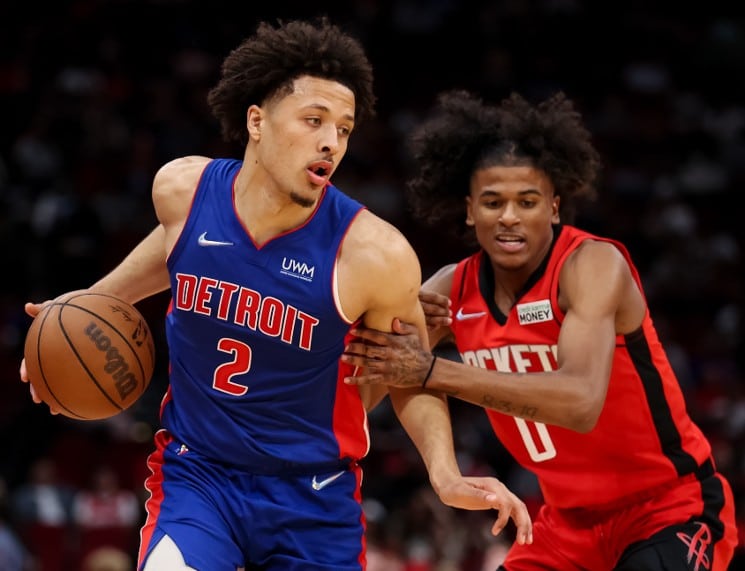 In today’s low-tier snoozer, the Houston Rockets (9-20) are facing off versus the Detroit Pistons (4-23) at Little Caesars Arena. Will Cade Cunningham and the Pistons quash their 13-game losing streak this afternoon?

When these teams’ betting statistics are compared, the Rockets are 15-13-1 against the spread in the 2021-22 NBA season, whereas the Pistons are 13-14 against the spread. This game will start at 12 p.m. ET, and the contest will air live via Bally Sports Detroit, Bally Sports Indiana, Bally Sports Sun and NBA League Pass. Per Land of Basketball’s database, based on 144 head-to-head regular season games played all-time during the regular season, Detroit is 75-69 versus Houston. Additionally, in the past three meetings, the Pistons are 2-1 against them.

On Nov. 10, 2021, the first meeting of this regular season, Detroit won 112-104 at Toyota Center. In other news, the Pistons assigned Luka Garza and Isaiah Livers to the Motor City Cruise, the team’s NBA G League affiliate. In a total of 15 games played this season, Garza has averaged 3.7 points, 2.1 rebounds and nearly 1.0 assist per game. The rookie center was selected 52nd overall in the 2021 NBA Draft. As for Livers, he has spent many games on the team’s injury report due to a right foot injury. Livers was selected before Garza at pick No. 42.

The Detroit Pistons have assigned Luka Garza and Isaiah Livers to the Motor City Cruise.

Rockets center Christian Wood upgraded to questionable to play in Detroit tomorrow. He missed the past two games with tendinitis in his left knee. Guard Armoni Brooks is questionable with a sore left ankle.

Moreover, in the Rockets’ 116-103 home loss versus the Knicks on Thursday, center Daniel Theis added one more double-double to his career total, closing out his performance with 22 points, 10 rebounds and 1.0 assist in 33 minutes spent on the court. Forward Jae’Sean Tate ended his night with 20 points, 3.0 rebounds and 6.0 assists in 29 minutes played. In the fourth quarter, New York outscored Houston 32 to 21.

According to ESPN’s Basketball Power Index, the Rockets have a 50.5% chance of winning. Trust your instincts.

As for the Pistons, on Wednesday, in their 122-113 road loss against the Pacers, forward Saddiq Bey earned another career double-double, amassing 28 points, 10 rebounds and 5.0 assists in 36 minutes played. Rookie guard Cade Cunningham also had 19 points, 6.0 rebounds and 4.0 assists in 34 minutes of action. Detroit surrendered a total of 70 first-half points. While they did outscore the Pacers 22 to 19 in the fourth quarter, their pitiful defensive effort lost them the game.

For special betting trends, the Rockets are 9-3 ATS in their past 12 performances this season. Not to mention, the total has gone over in four of their last five contests. Next, Houston is 1-4 straight up in the team’s previous five contests, and the Rockets are 1-8 ATS in their past nine matches versus the Pistons. Last but not least, the team is 5-11 SU in their previous 16 matches versus Eastern Conference opponents.

On the flip side, the Pistons 0-10 SU in their last 10 games played. Also, the total has gone under in seven of their past 10 matches versus the Rockets. And, Detroit is 5-13 ATS in the team’s previous 18 games played at Little Caesars Arena. Next, the Pistons are 2-8 ATS in their last 10 games played in December. In other words, both teams are struggling to muster up wins this season, but the Rockets are the slightly more reliable pick. Expect them to cover the spread. If you are new to sports gambling, check out our handicap betting guide.

Pick the Rockets to win, they will cover the spread and the total will go over 218. BetUS oddsmakers could not determine a clear favorite in this matchup.