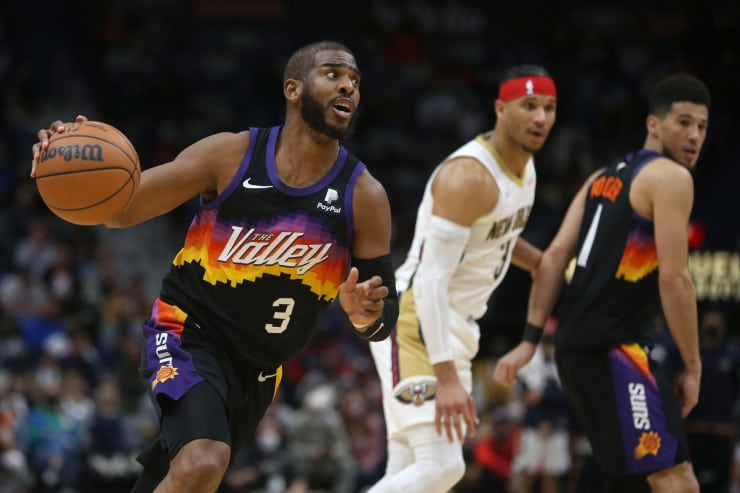 On Thursday, the Phoenix Suns (29-8 SU, 20-17 ATS) will host the Los Angeles Clippers (19-19 SU, 17-21 ATS) at the Footprint Center in Phoenix. Will the Suns cruise to double digit victory? Or will the Clippers battle to keep this one close and under control?

For the Los Angeles Clippers, Luke Kennard and Ivica Zubac are likely to be out as they remain in health and safety protocols. Isaiah Hartenstein and Paul George both remain out as well.

For the Phoenix Suns, DeAndre Ayton, Javale Mcgee, Landry Shamet, Abdel Nader and Jae Crowder will remain out in Health and Safety Protocols.

The Clippers have lost seven of their last 10 games, as they’ve been dealing with some absences to key rotation players.

Over those last ten games, the Clippers rank 18th in Defensive Rating and 27th in Offensive Rating. They’ve fallen off quite dramatically from their season ranking of 4th in DEF. Offensively, not much has changed, as they are 27th in on the year.

Much of the defensive fall-off has to do with the loss of Paul George’s elite perimeter defensive ability as well as the absence of Ivica Zubac and Isaiah Hartenstein down low. With those two out, the Clippers have been overly-reliant on Serge Ibaka to defend the paint.

The Phoenix suns are a force to be reckoned with. They are 8th in offensive rating, 2nd in Defensive Rating and 3rd in Net Rating, per NBA Advanced Stats.

They’ve been even better in the last ten games, ranking 1st in Offensive Rating and 2nd in Defensive Rating, doing so without Deandre Ayton, Javale McGee, Abdel Nader, Landry Shamet and Jae Crowder.

But the Suns have been buoyed by great stretches from Chris Paul and Devin Booker as well as continued contributions from Cam Payne, Mikal Bridges, and Cam Johnson.

Looking to place bets on the Suns? Don’t miss out on reading our AZ sports betting guide where we rank and compare the best Arizona sportsbooks first!

While the Suns have been an elite offensive unit this season, I am still looking towards the under in this matchup. The Clippers are averaging just 103.4 points per game over their last ten against pretty sub-par defensive units, including the Kings, Spurs and Nuggets.

When they have faced stiff defensive competition against teams like the Celtics, they could barely crack 100. Meanwhile, even though the Clippers’ have been dreadful on the defensive end of late, I think the Suns will have to rely on more shot-making tonight than usual. With McGee and Ayton out, they won’t be able to abuse the paint.

While the Suns have been great, the Clippers don’t have enough firepower to get over 100 and the Suns won’t have enough shot-making to clear the total themselves. Back the Under at 222, this one will be uglier than we think.