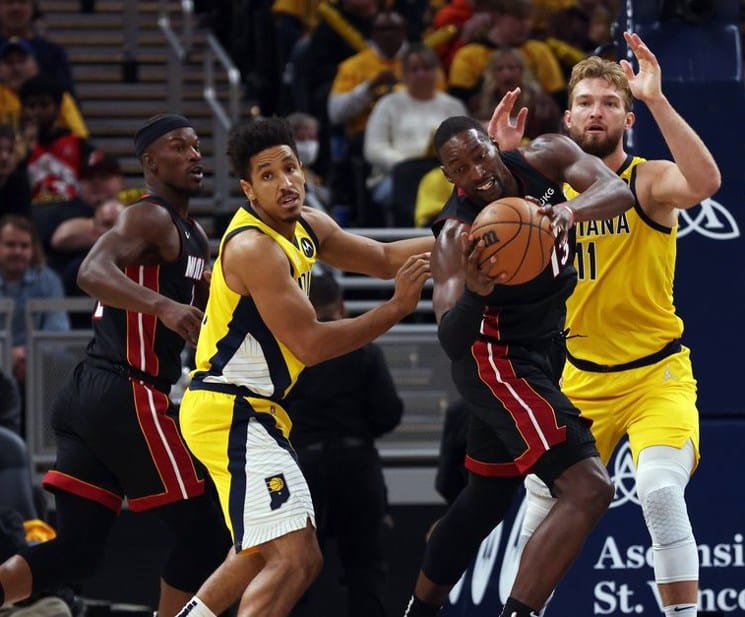 For tonight’s intraconference matchup, the Miami Heat (13-9) are focusing on bouncing back versus the Indiana Pacers (9-15) at Gainbridge Fieldhouse. Will Malcolm Brogdon and the Pacers end their own three-game skid?

Following Thursday night’s 152-79 historical blowout game between the Thunder and Grizzlies, the Heat no longer have the record for the most lop-sided loss in NBA history. Memphis pulled off something incredible last night, which has not been matched since the early nineties. The Grizzlies won by 73 points! Until yesterday, the worst loss in the history of the league was back on Dec. 17, 1991, when the Cavaliers defeated the Heat 148-80. Sorry, Thunder fans, Heat fans are definitely celebrating right now.

Heat no longer have that record. We moveeeee 😭🔥

Imagine getting slapped by 70+ https://t.co/zJOQcqn3ho

Jimmy Butler did not travel with the Heat to Indiana. So it will be four games missed with tailbone bruise when also factoring in Saturday in Milwaukee. Also no Bam, Morris, Oladipo, Garrett.

Furthermore, on Wednesday, in the Heat’s surprising 111-85 home loss versus the Cavaliers, guard Tyler Herro led his team in scoring, accumulating 21 points in 36 minutes played. Dewayne Dedmon, Caleb Martin and Gabe Vincent each contributed 11 points in their performances as well. After finishing with a total of 13 rebounds in 31 minutes spent on the court, Dedmon also earned another career double-double.

As for the Pacers, in their 114-111 home loss against the Hawks on Wednesday, guard Malcolm Brogdon scored a team-high 27 points in 36 minutes played. Not to mention, forward Domantas Sabonis added yet another double-double to his career total, ending his showing with 22 points, 10 rebounds and 4.0 assists in 39 minutes of action. However, even then, the Pacers were still outscored 38 to 29 in the first quarter.

For vital betting trends, the Heat are 1-5 ATS in their last six performances. The total has gone over in 10 of their past 14 games. The team is also 8-4 straight up in their previous 12 contests versus the Pacers. To add to these betting statistics, Miami is 3-6 SU in the team’s last nine matches against Eastern Conference opponents. Keep in mind, the total has gone under in their past five road games at Gainbridge Fieldhouse. Lastly, the Heat are 3-6 SU in their previous nine contests versus Central Division opponents.

On the flip side, the Pacers are 1-4 SU in their past five performances this season. Also, the total has gone over in four of Indiana’s last five contests. Having said this, the total has gone over in five of the team’s previous six home games. Next, the Pacers are 1-5 ATS in their past six matches versus Southeast Division opponents. In conclusion, contemplate picking the Pacers to win and cover the spread. Notwithstanding the fact that Indiana can disappoint from time to time, they are the better pick.

Pick the Pacers to win, they will cover the spread and the total will go under 208.5. Indiana is a 5.5-point favorite with BetUS.