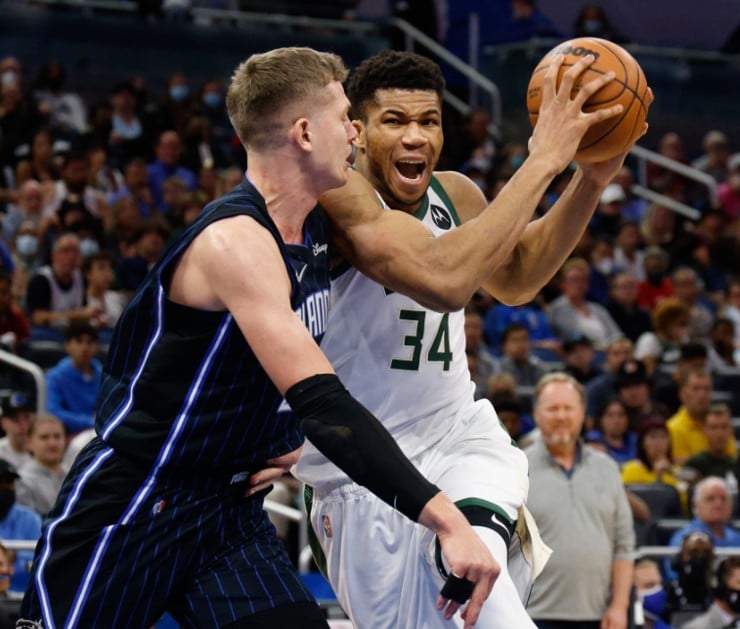 In tonight’s Eastern Conference rematch, the Milwaukee Bucks (23-13) are facing off versus the Orlando Magic (7-28) at Amway Center. Will the Magic sneak away with their first head-to-head victory versus the Bucks since Feb. 9, 2019?

Heading into Thursday night’s intraconference mismatch, the Bucks are 16-20 against the spread in the 2021-22 NBA regular season, while the Magic are 15-20 against the spread. The tip-off time for this contest is 7 p.m. ET. The game will air live via Bally Sports Florida, Bally Sports North, Bally Sports Wisconsin and NBA League Pass. Per Land of Basketball’s database, based on 120 head-to-head regular season games played all-time between these two teams, Milwaukee is 67-53 versus Orlando. To add to these all-time records, in the previous 10 meetings, the Bucks are a perfect 10-0 against them.

As stated above, the Magic have not defeated the Bucks since Feb. 9, 2019, when they won 103-83 at Fiserv Forum. This season, Milwaukee is 3-0 versus Orlando, with the Bucks last winning 127-110 over them at Amway Center on Tuesday. In other news, due to COVID-19 affecting rosters across the NBA, the league office is allowing teams to sign players via 10-day hardship contracts. The Magic are the latest team to add another player; they signed Gabe York. In the G League, he is averaging 8.6 points, 2.1 rebounds and 2.9 assists per game in the current 2021-22 season.

Looks like the #Bucks will see another new face… https://t.co/xYNxOWEx43

Moreover, in the Bucks’ 127-110 road win over the Magic on Tuesday, forward Giannis Antetokounmpo scored a team-high 28 points in 30 minutes played. Forward Khris Middleton also closed out his performance with 21 points, 2.0 rebounds and 3.0 assists in 31 minutes of action. In the second quarter, the Bucks outscored the Magic 40 to 21.

While Milwaukee allowed 50 points in the free throw lane, the team had an excellent showing offensively. They shot 47-for-85 (55.3%) from the field and 17-for-37 (45.9%) from three-point range. Including this win, the Bucks have won four consecutive games. They are now 11-8 away, 12-5 at home and 10-9 ATS on the road. The team ranks third in the Eastern Conference.

Referencing ESPN’s Basketball Power Index, the Bucks have a 74.1% probability of winning.

As for the Magic, in their 17-point loss versus the Bucks, rookie forward Franz Wagner scored a season-high 38 points in 38 minutes spent on the court. Wagner’s 38 points leads all other rookies in single-game scoring this season. Forward Wendell Carter Jr. added one more double-double to his career total as well, amassing 19 points, 10 rebounds and 1.0 assist in 33 minutes played.

Aside from missing plenty of their shots, the Magic committed a total of 25 personal fouls. On top of a nonexistent defense, that ultimately led to the team’s 12th loss at home this season. After this defeat, Orlando is now 2-12 at home, 5-16 away and 3-11 ATS at home. They rank 14th overall in the conference.

For crucial betting trends, the Bucks are 4-1 straight up in their previous five performances. They are also 8-2 ATS in their last 10 games versus the Magic. Next, Milwaukee is 10-0 SU in the team’s past 10 head-to-head matches against Orlando. Plus, the Bucks are 7-0 ATS in their previous seven contests at Amway Center. Finally, the total has gone over in four of their last six matches versus Southeast Division opponents.

Pick the Bucks to win, the Magic will cover the spread and the total will go under 217. Milwaukee is a 14-point favorite on the road with BetOnline.