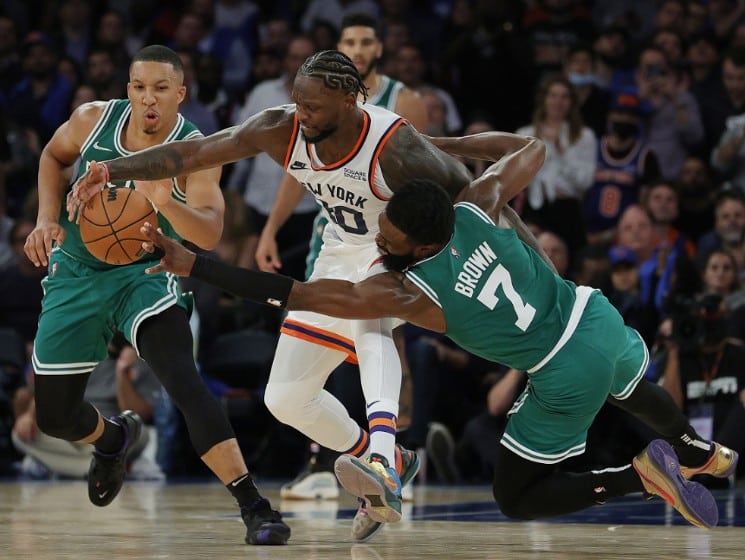 For Saturday night’s Eastern Conference rivalry contest, the New York Knicks (13-16) are playing the Boston Celtics (14-15) at TD Garden. Will Jayson Tatum and the Celtics earn their first head-to-head win versus the Knicks this season?

Heading into tonight’s intraconference matchup, the Knicks are 12-17 against the spread in the 2021-22 NBA regular season, while the Celtics are 14-14-1 against the spread. This contest will start at 7 p.m. ET. The game will air live via MSG Network, NBA League Pass, NBA TV and NBC Sports Boston. According to Land of Basketball’s database, these two competitors have played one another 482 times during the regular season all-time. Boston is 297-185 versus New York. However, in the previous three meetings, the Knicks are 2-1 against them.

On Oct. 20, 2021, the first meeting of the regular season, New York defeated Boston 138-134 in double-overtime at Madison Square Garden. On another subject, free agent guard Isaiah Thomas signed a 10-day contract with the Lakers on Thursday. Celtics guard Marcus Smart commented on this interesting move. He said, “Just proud that he gets another chance. He’s been doing everything he could to show the world he’s still it. I think he’s written off a little early. I’m just happy someone gave him a chance.” Smart advocated for Thomas’ return to Boston, but he was needed elsewhere.

Marcus Smart on Isaiah Thomas: "Just proud that he gets another chance. He's been doing everything he could to show the world he's still IT. I think he's written off a little early. … I'm just happy someone gave him a chance." Says he wished that team could've been the Celtics.

Furthermore, on Thursday, in the Knicks’ 116-103 road win over the Rockets, guard Immanuel Quickley led his team in scoring, finishing his performance with 24 points in 32 minutes played. Guard Evan Fournier closed out his effort with 23 points, 1.0 rebound and 3.0 assists in 28 minutes of action. In the opening quarter, the Knicks outscored the Rockets 39 to 30.

Referencing ESPN’s Basketball Power Index, the Celtics have a 65.2% probability of winning.

Meanwhile, in the Celtics’ 111-107 home loss against the Warriors on Friday, forward Jayson Tatum scored a team-high 27 points in 42 minutes spent on the court. Guard Jaylen Brown ended his night with 20 points, 9.0 rebounds and 2.0 assists in 33 minutes played as well. Both teams finished with 45 rebounds, but Boston outscored Golden State 38 to 34 in the free throw lane.

Despite holding the Warriors to 14 third-quarter points, the Celtics also surrendered 68 points in the first half. Not to mention, the C’s free throw shooting suffered. They shot 20-for-29 (69%) at the line. Following this defeat at home, the team is 7-5 at home, 7-10 away and 5-6-1 ATS at home this season. Boston ranks 10th in the conference.

For useful betting trends, the Knicks are 1-4 ATS in their last five performances this season. Additionally, the total has gone over in six of their past nine contests. Next, New York is 1-4 straight up in the team’s previous five games, and they are 4-2 ATS in their last six matches versus Boston. Finally, New York is 0-5 SU in the team’s past five contests against Eastern Conference opponents.

As for the Celtics, they are 7-2 SU in their previous nine performances. Also, the total has gone under in six of their last eight matches versus the Knicks. And, Boston is 7-2 SU in the team’s past nine games played at TD Garden. Next, the C’s are 2-4 ATS in their previous six contests played on a Saturday. Therefore, think about picking the Celtics to win, but the Knicks could cover the spread. If you need sports betting assistance, read our handicap betting guide.

Pick the Celtics to win, the Knicks will cover the spread and the total will go over 210.5. Boston is a 4.5-point favorite at home with BetUS.